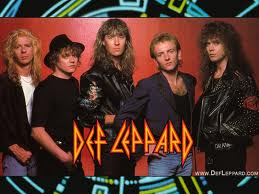 For anyone out there who might actually be reading the tales of my heavy metal youth, you probably know that I consider Kiss and Motley Crue to be my all time favourite bands. That said, it was another band that takes the main “responsibility” for me becoming the metalhead that I am. 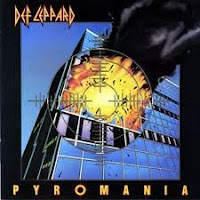 Def Leppard and their 1983 album Pyromania introduced me to guitar driven rock and opened the floodgates to my music obsession. I still consider Def Lep’s first three albums as some of my all time favourites, and they provided the music to many air guitar concerts in my friend’s kitchen.

Unfortunately I was too young to go and see Def Leppard in concert when they came around my neck of the woods on the Pyromania tour. That was ok because we would be able to see them touring the next album in the next year or two when they released the follow up to Pyromania.

Good thing I wasn’t holding my breath for that show because it would be a long time before anyone heard any new material from the Leppard camp.
It would be four long years, 1987 to be exact before Hysteria would finally see the light of day. To be fair to the band, Def Leppard had an enormous number of “issues” that contributed to such a long delay. The biggest obstacle of course was Rick Allen’s horrific car crash that resulted in the loss of his arm.

Now you really have to give the rest of the band credit. The band had finally hit the big time and the hard rock music that they played was finally becoming mainstream and their drummer loses his arm! I truly believe that most bands facing the same situation would not have had the patience to stand by the healing, rehab and the time it took for Rick to relearn to play the drums without his arm. Rick’s courage is nothing short of legendary, but Def Leppard deserves serious kudos for standing behind their drummer at such a crucial time.

I do remember joking with my friends about how long Def Leppard were taking with this record, this of course would be overshadowed when we started waiting for new Guns and Roses, (or is that Axl and his buddies?). I truly thought that the incredibly long span of time was going to ruin Def Leppard. I truly thought the fans would have moved on to the Motley Crues and the Poisons and such. I also thought they couldn’t follow up the masterpiece that was Pyromania. 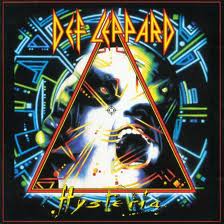 Boy was I wrong! Hysteria hit the stores on August 3rd, 1987 and made its way to the top of the Billboard 100 charts. The album spawned 7 hit singles and MTV welcomed Def Leppard back with. open arms.

The slicker than glass production from Mutt Lange will forever be the bane of debate between hard rock/heavy metal fans around the world.

Was Hysteria too clean for its own good? Def Leppard came from the NWOBHM and I am sure the metal “purists” were rolling their eyes screaming “posers!” That said, Mutt and the band created an album of sugary, radio friendly hard rock that was sonically out of this world and like it or not it took off like a Rocket (pun intended) to the top of the billboard charts. 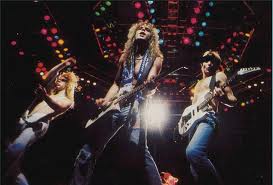 Hysteria, to date has sold more than 20 million copies and although not nearly as edgy as their first three albums, I can’t deny that Hysteria was a pretty special album. Be sure to check out the VH1 Classic Album dvd on the making of this album. They did an amazing job dissecting the tracks, isolating certain parts and you will truly see just how well constructed and melodic these songs really are.

I can clearly remember my buddies and I all but writing Def Leppard off. In an age before internet the band seemed all but forgotten after four long years. I am glad they proved me wrong all those years ago because Hysteria still holds a special place in my collection, standing the test of time quite nicely. A must own album from 1987. A must own album period!