Sometimes I get ideas…..that’s not always a good thing though as sometimes these ideas tend to get me into trouble or just basically in over my head.  The latest and greatest brainwave is no exception to the precedents that I’ve already set in this vein.  I have always, since hearing about and seeing the line-up for Wacken Open-Air (German Festival) several years ago, wanted to travel to Europe and see a proper hard rock music festival, something that we are severely lacking in here in North 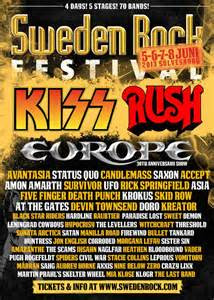 America even though we make the attempt with some festivals in Canada but more in the USA.  How do I know that they’re better at these festivals over there if I’ve never been??  Well, aside from the fact that it stands to reason given that Europe kept this genre of music alive while everyone in North America threw away the bands in favour of the ascending grunge era or the dark era of music as I like to call it.  Not only that, but many of my favourite bands are European and then all you have to do is look at the line-ups.  for example this years Sweden Rock (my chosen victim) roster of 83 bands…..yes 83 bands!!

In a flash of the pan the decision was made, although I wasn’t quite aware of it yet  and I was searching flights to Sweden, dreaming of actually going.  I quickly mumbled my dreams of going to Sweden at work and received a bit of an offhand, evasive and vague “should be OK, but wait and see” type of remark, which in my own little mind I promptly twisted into approval to go!  I purchased a flight touching down in Stockholm, by way of Heathrow in London on the 1st of June and flying out of Copenhagen, Denmark, again through Heathrow Airport on June 13th.  My plan was simple, if I was going to go all that way, I was going to see some things while I was there, I do LOVE to travel and who knows if I’ll ever get to Sweden or Denmark again in

my lifetime.  I had banked on spending June 1st, 2nd and 3rd in Stockholm staying at a hostel and experiencing what this famous Scandinavian city had to offer.  On the morning of June 4th I would catch a train from Stockholm to Solvesborg, a 5 hour train ride away, where the festival is being held.  Then I would camp in the media/press camp ground for my accommodations during the festival and I would have the afternoon and evening of the 4th to set up, meet some people who also would surely be preparing for the festival and maybe even see the sights of Solvesborg.  Sweden Rock festival begins on the 5th of June with the first bands taking the stages (there are 5 of them!) beginning at 3:30pm.  The last band finishes at 2am on Saturday June 8th, so sleeping off the sure to be mass quantities of adult beverage intake and preparing to leave the camp site late afternoon Sunday June 9th, catching a train to Copenhagen Denmark for June 10, 11, 12 in that city before heading home to Toronto would round out my adventure.  What an awesome trip!  I was so excited and began reading travel sites and books for things to do in those cities.  I also searched out the many bands playing at the festival that I was unfamiliar with, learning the music and discovering some new favourites.  Then it was like Zeus’s mighty “Hammer of the Gods” came crashing through my vision and shattered my plans. 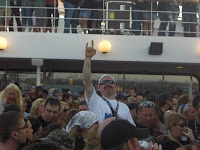 Things with a new store opening were behind schedule at work and when it came to light that I was leaving from May 31st to June 13 all hell broke loose (yes, pun intended as KISS is playing at Sweden Rock!).  There was suddenly absolutely no recollection of the brief conversation in which I believe that I garnered approval to go and it was not well received seeing as I had just had a week off to head to Florida for The Monsters of Rock Cruise (what I really need is someone to pay me to cover rock shows and events….that would be a dream come true….lol).  Any ways I nearly lost my job in the process and if I kept up with my plan and ventured to Sweden I surely would lose my employment.  The flight that I had purchased was non-refundable and so I would lose that money if I didn’t go.  I was extremely bitter, but hey, I have to pay the bills, so I resigned to the fact that not only would I lose my investment, but I would not be able to attend this wondrous event.  I buried myself in work and did what no-one else in the company could do as well as I (no, I’m not just tooting my own horn) and I got the store off the ground and running well, then having the idea that maybe I could compromise with everyone and try to change my flights for a shorter time away.  This was agreed with everyone (many stating how good of a job I had done with the store) and so, now we are where we are today.

I still have a job (one that I love….mostly….lol) and I’m going to Sweden!  I had to sacrifice the extra time in Stockholm and Copenhagen and now I land in Stockholm late in the afternoon of June 4th, stay one night in the hostel there and rise early to grab a 6am train to Solvesborg, arriving at the festival camp ground around noon.  I should still have lots of time to set up my tent and saunter into the grounds for the first band at 3:30pm.  It will be a bit of a push on Sunday June 9th as after Avantasia shuts the festival down (slated to exit the stage at 2am on Saturday) and I grab a few hours sleep before having to break down my tent and catch an early train to the Copenhagen airport, but totally worth it! 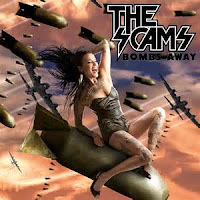 The first day is an exciting one for me, containing 3 bands that I’m totally hyped to see, all Swedish bands no less.  Here’s how it’s shaping up so far:  The Last Band  from Sweden ironically is on first at 3:30pm followed by country flavoured Stacie Collins from The US, both these bands are scheduled for 40 minutes of play.  Then we come to the first of my “treasured Swedish trio” with The Scams, whose Bombs Away CD gets a fair bit of play around the Meister stronghold.  This CD is great start to finish and jam packed with fast paced rockers.  I ordered it on a whim after reading a review on the internet and I was not disappointed.  As the lead song on the album says…..the Thrill Is On (THRILL IS ON OFFICIAL VIDEO). 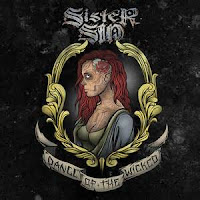 UK progressive metal outfit Threshold has a 45 minute slot after that on another nearby stage, so I’ll check them out while waiting for the second of the “treasured Swedish trio”, Sister Sin.  I had the absolute pleasure of interviewing vocalist Liv Jagrell when they were here in Toronto in February, opening for Doro (who is also at the festival) (LIV JAGRELL INTERVIEW/CONCERT REVIEW).  They are awesome live and Liv’s intensity just envelops you and pulls you in especially on tracks like their cover of U.D.O.’s 24/7 in which they absolutely destroy (in a good way, that is) the original (24/7 OFFICIAL VIDEO).  They are remastering and releasing their first recording Dance Of The Wicked soon on Victory Records and I’ve received a promo download from Victory, so I’ll be listening on the lengthy flight over, watch for my review coming soon.  Their set is slated for an hour, so hopefully I’ll get to see and hear a few more tunes than I did when they had the opening time slot in Toronto. 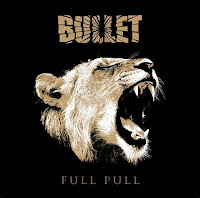 Then I’ll check out Sweet from the UK and their classics Ballroom Blitz (covered by Krokus who is here at Sweden Rock) and Fox On The Run (a cover of which appeared on Anomaly from Ace Frehley, whose former band KISS is also at the festival) before the last of my “treasured Swedish trio” in Bullet, who I discovered by accident and love their AC/DC style.  One of my first articles for Decibel Geek was a bio piece on Bullet (I BIT THE BULLET ARTICLE).  Bullet are scheduled for an hour and a quarter set, so that should be enough to encompass their four releases, all jam packed to the brim with straight ahead, no frills balls out rock and I’m looking forward to a high octane live set.  Their newest album hit stores in late 2012 entitled Full Pull.

Sweden’s Candlemass gets the closing slot of the first night, slated to wrap up at 2am.

I’m not gonna lie to you, I’m a bit nervous as this will be my first trip to a foreign speaking country by myself and even the sheer immensity of the festival itself is a bit intimidating as you can see in the grounds map.  The festival seems extremely organized and the organisers are excellent at keeping generally everyone informed through Facebook and sending emails with updates and press information.  I’m sure I drove the accreditation person absolutely nuts with my barrage of nervous, random, non-accreditation questions, but I’m looking forward to the adventure and hopefully meeting up with Liv and the Sin boys and maybe Nigel Glockler (Saxon drummer) among others as well.  I had planned to do in depth bio articles on the bands, interviews and history of the festival, but with the late go ahead in actually going, it fell by the way side, so here we go, wish me luck and I’ll post my adventures as I go if possible….if not upon my return I’m sure I’ll have lots of cool shit to yak about!