A "Shock"ing Thanksgiving in Ottawa! 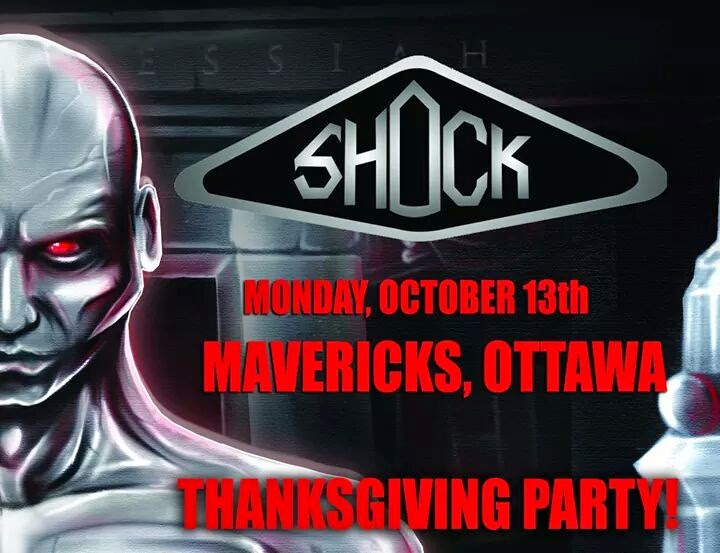 Heading south to Toronto on Thanksgiving Monday by 7am to hop a bus bound for Ottawa with a return trip slated for 1:30am departure, I was off to check out a band that I’d been waiting to see since I discovered them.  Actually I was introduced to SHOCK via a friend writing for a competing website, consorting with the enemy perhaps you could say.  The disc quickly became a  favorite, appearing on my top of 2013 and a review on each of the three websites I’m involved with!  The Once Denied CD is still just as fresh now and often gets me through the early morning silence of prep time at work in the restaurant.

Lost in the nation’s capital shortly after my disembarkation of the bus, I had naturally walked the wrong direction out of the bus terminal through a rather sketchy looking area of town.  Finally returning and going the other way I found myself on Bank Street heading up to Wellington, which turns into Rideau, the location of Mavericks.  A photo of Meister reppin’ the Shock tee at the Houses of Parliament before settling in at a Scottish pub for fish & chips and a beer, or two, or three until the doors to Mavericks bar opened.

Nearly immediately upon entering the rather small venue I met bassist Steve Monette.  Great to finally meet Steve in person, guitarist John Tennant joined us shortly and they both introduced me to vocalist Tony Ve.  There was quite a lot of chatting all around and beer purchasing as they humbly thanked me for my efforts to attend the event.  No, boys thank-you for the great music and all you do.

Leading band, Rusted, were also one of the attractions for me, having again been introduced to the band through the same competitor who brought me Shock.  They entered the tiny stage to Europe‘s “The Final Countdown”, ripping through their opening selection that I was not familiar with.  “Two At A Time” was next up as the Montreal boys were rocking hard and all over the stage, well, as much as they could be with the limited space.  Two support poles/pillars at either side of the stage effectively blocked the bass and rhythm guitarist from a clear view.  What a stupid place to put a stage with these poles blocking views.  “Scream in the Night” saw lead vocalist Tony Rust donning a huge skull head in a bout of gimmicky showmanship that sits well in my book.  The sound in here had a huge echo and did not seem to improve as Rusted went on tearing up the stage.  “Rock Patrol”, title track to their debut album, came next and I was able to capture this album title track on video including the lead guitarist, Tommy D. Eagle, jumping from the stage and running through the audience.  “Young Wild & Free” was the swan song of Rusted‘s awesome high energy set.

Joe Thrasher was the next band to crowd the stage and their name was more than appropriate.  The band seemed extremely tight, but the music just wasn’t overly appealing to me.  Probably the most surreal moment took place between Joe Thrasher and Shock‘s sets as I was approached by a guy who remembered seeing me at Judas Priest in Rochester!  How about that?  I’m not the only crazy Canadian to travel far and wide for rock and metal!

Now for the main event: well at least my main event, Shock, no offense to Blaze Bayley.  First thing I noticed was that the sound had noticeably improved and Shock were sounding awesome right off the bat with “Fighting Chance”.  John Tennant and Tony Ve‘s fingers were sheer blurs of motion over the guitar strings as Steve Monette‘s thundering bass lines backed them up.  Shock‘s newest member, the drummer, looked extremely young pounding on the kit, but there was no shortage of talent as he bashed the skins.  I was loving every minute of this band and so happy that I decided to make the arduous journey up here to finally catch the live experience.  The setlist was comprised of a healthy selection off the Once Denied album, seven of the eight contained therein to be precise.  Each and every one had me singing along and more than a little headbanging, although I have to remember to tame both actions down during any videos I take.  Headbanging as it quite obviously shakes the picture and singing as I’m totally tone deaf, something not assisted by large amounts of beer.  Shock served up a heaping plate of old school thrash style metal based on chunky riffs, thunderous bass lines, and a pounding back beat, sprinkled with blistering guitar solos and screeching vocals.  Before they launched into “I’m Dangerous” guitarist John Tennant addressed the assemblage briefly, asking if anyone had come further than Toronto for the event.  When no responses greeted him, he dedicated the show to The Meister!  Super cool shout outs like that never get old for me.  Among the Once Denied selections of “Flaming Towards Earth”, “Full Speed Ahead”, “Slashing to Live”, “Driven To Kill” and “Paths of Glory” they debuted three new compositions.  What was printed on the setlist as“YMYL”, I can only assume is just an acronym for the actual title, “Patriot” and “Sonic Assault” were excellent additions to the Shock library and I’m totally stoked for the new album, hopefully coming soon, boys?  I know that Blaze Bayley is the promoted headliner for this evening, but Shock was 100% the real deal for me and reason for the trek.  If you’re unfamiliar with Shock, correct that pronto by contacting the band and checking out the videos I captured at the show coming soon on the Decibel Geek YouTube Channel.

More beer flowed as I congratulated the Shock guys on a truly killer set.  Blaze Bayley took the stage with Maiden Quebec as his backing band and he apologized to us for the lack of attendees.  “Lord of the Flies” got things underway and I remarked at how engaging Blaze was with the crowd (well gathering of about 100).  Throughout the set he several times offered a heartfelt thanks to those that made it out, the few but mighty he called us, and for the selling out of his CD/DVD on this first tour in Canada in 15 years.  He also, at one point, proclaimed that he was living his dream right now even though some would say that a less than half full room was not much of a dream.  He granted us all the day off tomorrow and invited us to stick around for a beer with him after as he was going to go straight to the bar after the set.  A man of his word he literally was assisted off stage by some fans and went directly to the bar, no quick stop at a dressing room even!  A very charismatic and engaging performer, much more so than when I saw him teamed with Paul Di’Anno at Sweden Rock 2014, but Shock stole the show for me.  Blaze‘s set included: “The Clansman”, “Ghost in the Machine”, “Soundtrack of My Life”, “Silicon Messiah”, “Futureal”, “Man on the Edge” and more.  I was surprised when we also were awarded the Maiden classics of “Running Free”, “Wrathchild”, “Iron Maiden” and “Wasted Years” before he headed to the bar.

After helping the Shock guys load up their gear it was off to catch the 1:30 am bus for a five hour trip back to Toronto and then straight to work Tuesday morning…….ahhh it’s a “Rock n Roll Life”!