AC/DC TURNS MY EARS OUT 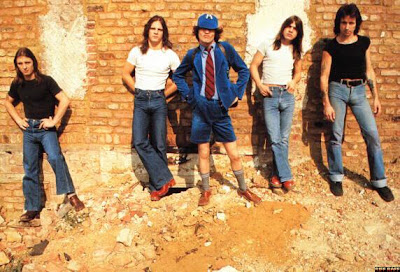 Anytime I hear the four letters AC/DC  I get a tingle in my ears. Nothing bad, Im not stroking out, but my ears are getting excited because they know the fun is about to begin. In the early years of AC/DC a young (sorta young) Scottish lad from Australia by the name of Bon Scott took thevocal  helm. Scott had a voice that could command attention, and weave a story full of booze and women and fist fights, all in that order. But when Scott sang, he sang with a form of rebellion and defiance in each note. 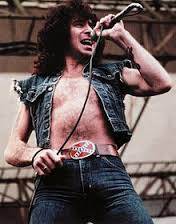 ‘High Voltage’ was the groups first album. Released in 1975, it rings off the charts and established the band as a force to be reckoned with. Bon Scott drives each and every song with different pitch of emotion and conviction. The man sings as if he’s singing for his supper, and the panties. Bon had a voice that when you heard it, you couldnt help but sing along, or clap your hands and sing. The song ‘Can I Sit Next To You, Girl’ is just the song to do both. It shows Bonn has a romantic side, sorta. He’s not a barbarian, no, not this guy. Typical story. He see what he wants, and wants every ounce of it…BADASS!!!! Just the first riff lets you know the song is gonna do something, and possibly something naughty. I mean, let’s be honest. It’s Bonn Scott. Every Daddy’s nightmare (then) and every bad boys role model (still). He and Jim Morrison made it hip to be skinny with long hair before Tommy Lee and Nikki Sixx did.

Angus and Malcom Young, the bands founders and only members to appear on EVERY album (minus the rehab for Malcom) knew what they had when they approached Scott. The guitars are heavy and the rhythm guitar is DEFINATELY making its presence known. AC/DC, at that time was no frills, straight to the point rock. They didnt have an auto tune nothing. There was no lay this or that ack down. No, they were in a room, and played til the fingers bled or drumsticks broke and the singer went horse. TRUE ROCK N ROLL. But what they didn’t know at that time was they were laying. Blueprint, a blueprint for the next generation of rockers to come. AC/DC made everyone take notice, and notes. The Scottish, the British, hell, anyone who could play a guitar with a mean lick and had long hair that there was a new brand of music coming in town, and it’s name was METAL! 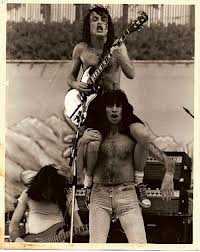 Besides being one of the most influential bands on the planet, these guys are often called one of the groups that help start the British Steel movement of the late 70’s to early 80’s.

Sadly, on February 19, 1980, Bonn Scott died from alcohol poisoning. Some say he simply drank himself to death, some say he simply choked on his own vomit, and  some even say he was killed. Others say, he simply froze to death. No one is exactly what happened. Bonn Scott started a master plan when he was hired by the Young brothers. He set out to shake up the world of rock n roll. And that he did. Bonn Scott was replaced by Brian Johnson in 1980, and the band hasn’t looked back since. To date AC/DC is one of the top grossing bands in the world. No one walking this earth doesn’t know who these guys are( unless your parents were lame and didn’t listen to them), but the influence on hard rock/metal music is unmeasurable. Somewhere, in rock n roll heaven, Bonn Scott is sitting next to the other early rockers that left us too soon and they are smacking high fives and approving, sorta on the legacy that has preceded them…