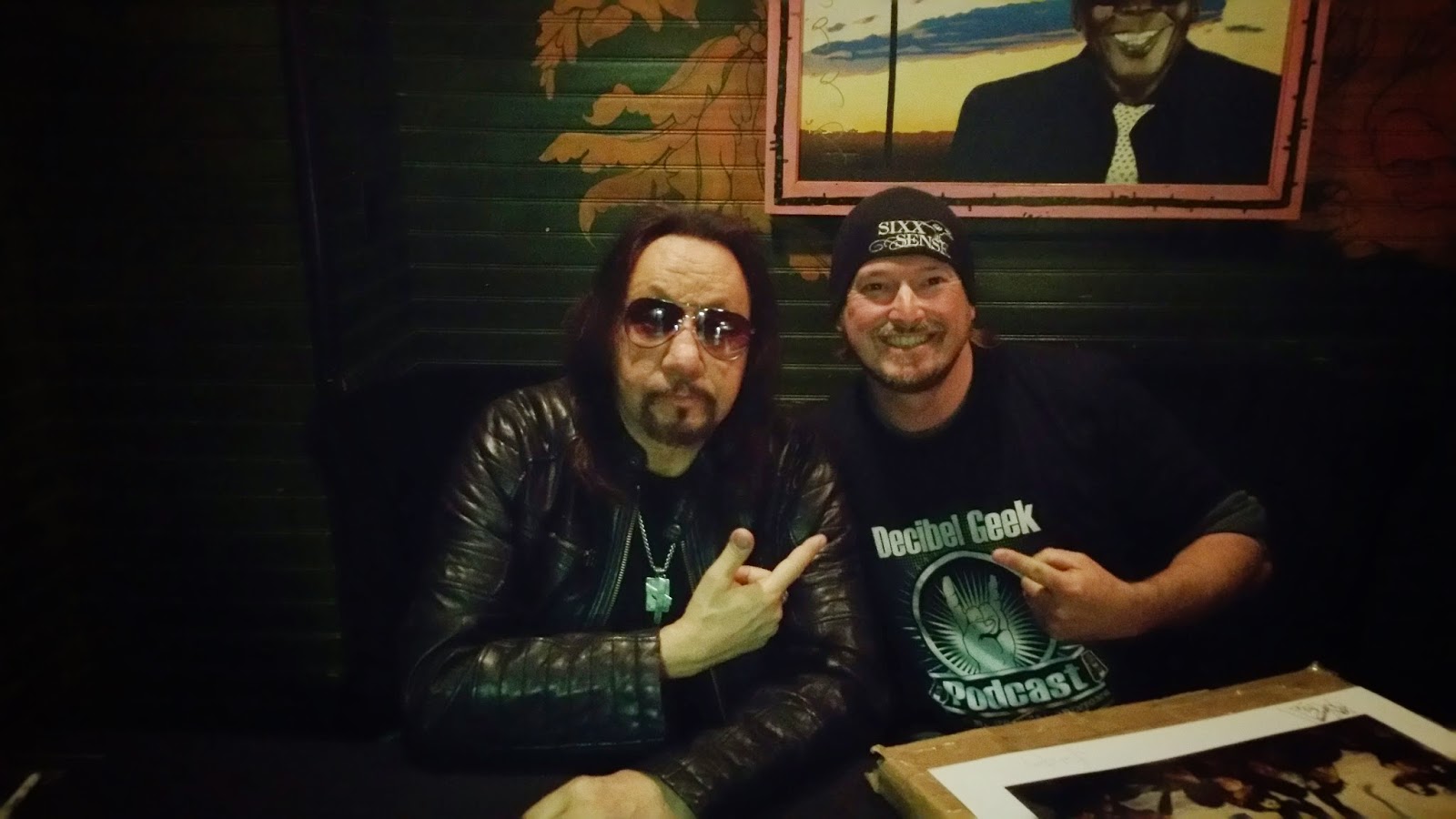 The last time I saw Ace play was with KISS was in 2000 on the KISS Farewell Tour and, as been well documented, he was not in very good form. His playing was sloppy, even by Ace standards and, by that time, he was simply mailing it in. That performance was reminiscent of the last two times I saw Ace solo, 1993 and ’94. Both times he was a mess and both times I left the club feeling sad and disappointed. Sad because of what one of my heroes had become and disappointed because I was always rooting for Ace to be great. How could this be the same guy that played so amazingly on those first six KISS studio records and ’78 solo album? He wasn’t even the same guy an underage me with a fake ID saw at The Palace in Hollywood on the Trouble Walking tour just a few years before. Ace was great that night. Peter Criss even joined him onstage to play Deuce!

So when I saw Ace was going to tour Space Invader and had announced a show in Anaheim,  CA only a few miles from where I live, I couldn’t get my ticket fast enough. The show was scheduled 3 days after my birthday so that gave me all the justification I needed to go all out and pony up for the VIP meet and greet. I had met Ace once before in the early 90’s at the NAMM show. Not surprisingly, he arrived well after his scheduled time and was completely out of it. I was lucky he was able to sign his name. I needed a redo. 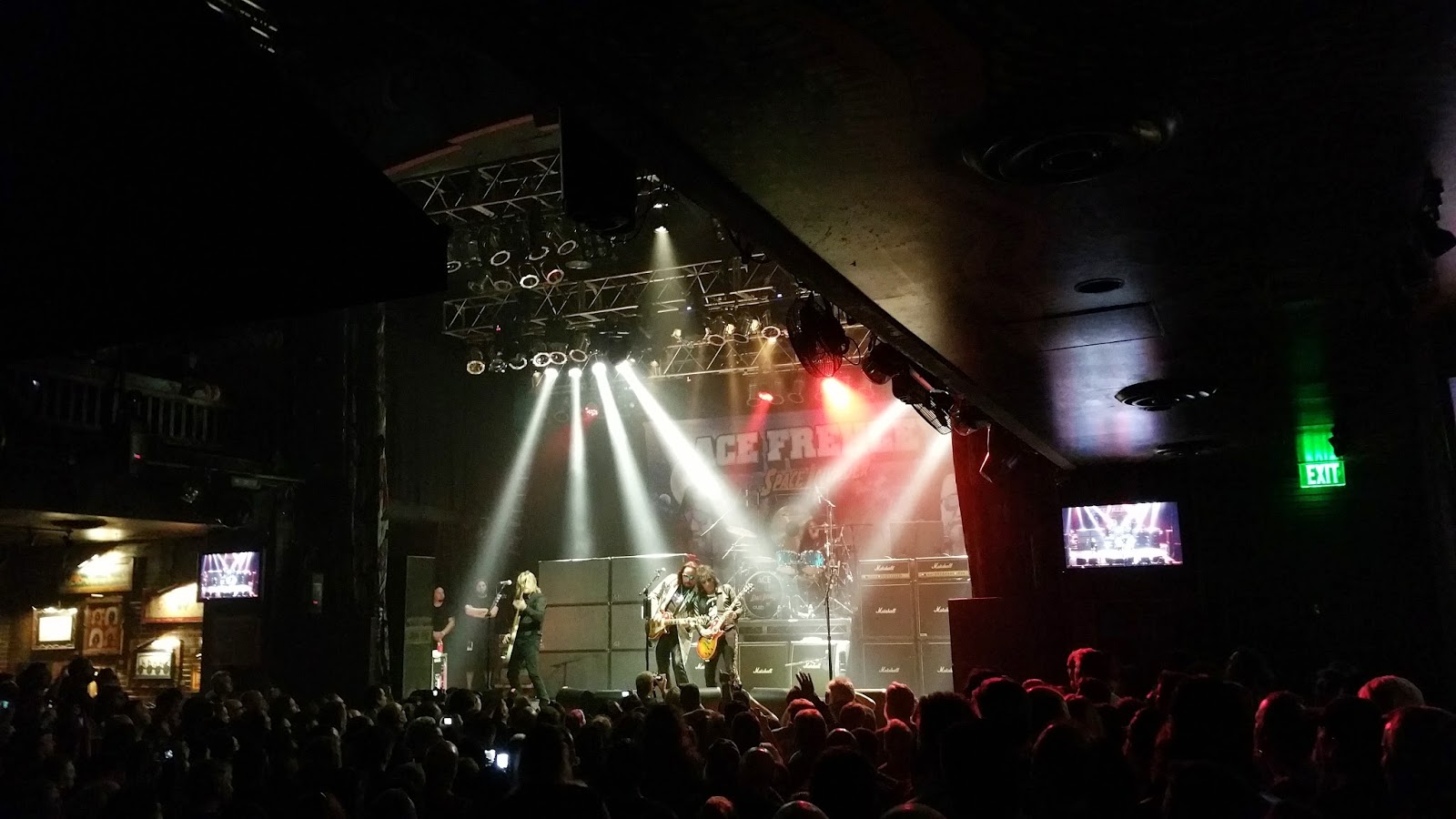 I’ll admit I was more than a little nervous in the days leading up this show. By all accounts, Ace was playing great, but was still having some, shall we say, punctuality issues. I also knew that I was going to be writing this review and just as I was 20 years earlier, I was rooting for Ace to be great.

Even though I had purchased my ticket and meet and greet over a month in advance, beyond a purchase confirmation email, I did not receive any details about the meet and greet. I emailed the provided contact, John Ostrosky, Ace’s tour manager, twice prior to the show with no response. I even tried reaching him through Facebook. I get that you’re busy, but if you can’t respond to questions from an email address you provided, hire someone who can. Finally, less than 24 hours before the show, I received a group email with instructions for the meet and greet. I knew it was a group email because I could see the emails of all the other recipients and, presumably, they could see mine. I’m no IT guy, but it’s not hard to mask this info. It was starting to feel a bit like amateur hour. I don’t expect perfection, but more than 24-hour notice for an arrival time and not publishing my email to strangers isn’t asking for a lot.

The night of the show, I arrived at the venue, as instructed at 7:30 only to find the box office had not yet been given a list of those doing the meet and greet. It would be another 30 minutes before me and the other 50 or so received our tickets and passes. Once inside, we were first ushered downstairs to the merch booth to receive our t-shirts. We were told the rest of the meet and greet items (CD, small poster, 8×10, picks) would be given out later so back upstairs to line up for the meet and greet. It’s now about 8:15 and we’re told the meet and greet will begin at 9:00. The opening band is already on and all I could think about was people have been waiting in a general admission venue packed like sardines since 7:30 and the meet and greet isn’t even starting until 9:00. What time in Ace planning on going on? I hope he got his wake up call. 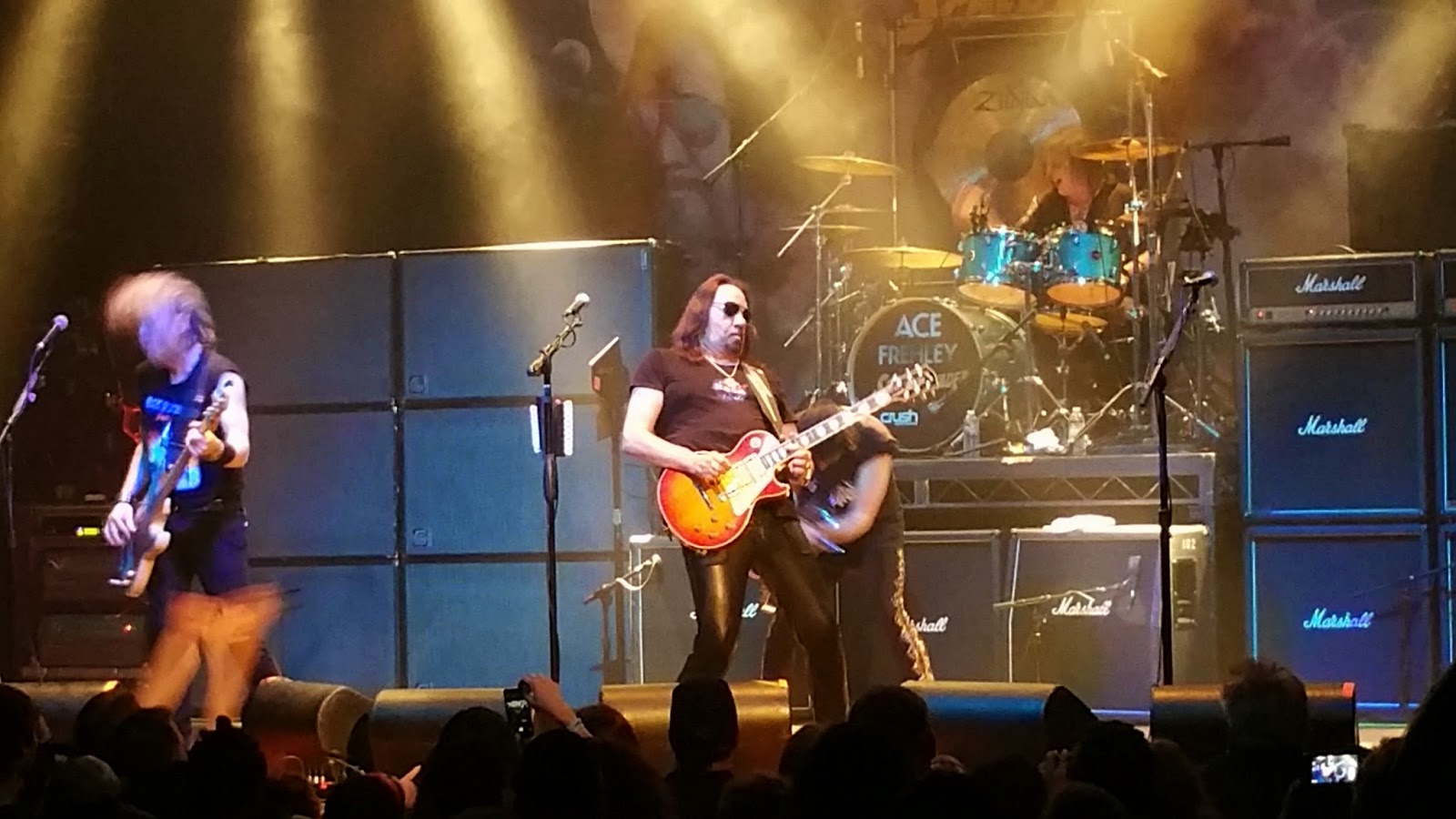 The meet and great finally got rolling at 9:30. A full two hours since we were told to be at the venue and over an hour since we lined up inside. I could tell the standing room only, near capacity, crowd was getting restless. They too had been on their feet for the better part of two hours. I had read that Ace had been forced to cut songs from previous dates due to curfews. I knew the House of Blues in Anaheim typically does not have a curfew so while it was shaping up to be a late night, at least I felt there was a good chance we’d get a full set. Finally, we were ushered in one at a time to see Ace. He was seated behind a table wearing his familiar sunglasses. He was quiet and did not say anything as I worked my way around the table and said hello. In addition to all the provided goodies, Ace will sign one personal item so long as it’s not a guitar or guitar part. Ace perked up a little when he saw what I had brought for him to sign, a Love Gun artist print signed by the artist, Ken Kelly. He asked me about the print and where I’d like him to sign it. He then reached out to shake my hand, thanked me and said “enjoy the show”. One of the House of Blues employees assigned to him took a photo with my phone and I was shuffled out of the room. All in all, I’m happy did the meet and greet. I had my do over and got my print signed. If you’re thinking about doing the meet and greet just set your expectations accordingly. My experience was it was quick, inefficient, and a bit disorganized. Ace’s tour manager, seems to be doing his best, but appeared to be overwhelmed at times. My advice to Ace or any artist charging fans for a meet and greet is if your going take money from your fans for a “meet and greet”, be on time, smile, be in a good mood and interact with the fans, even if you’re having a bad day and don’t want to be there. If you can’t do that, then don’t do them at all. 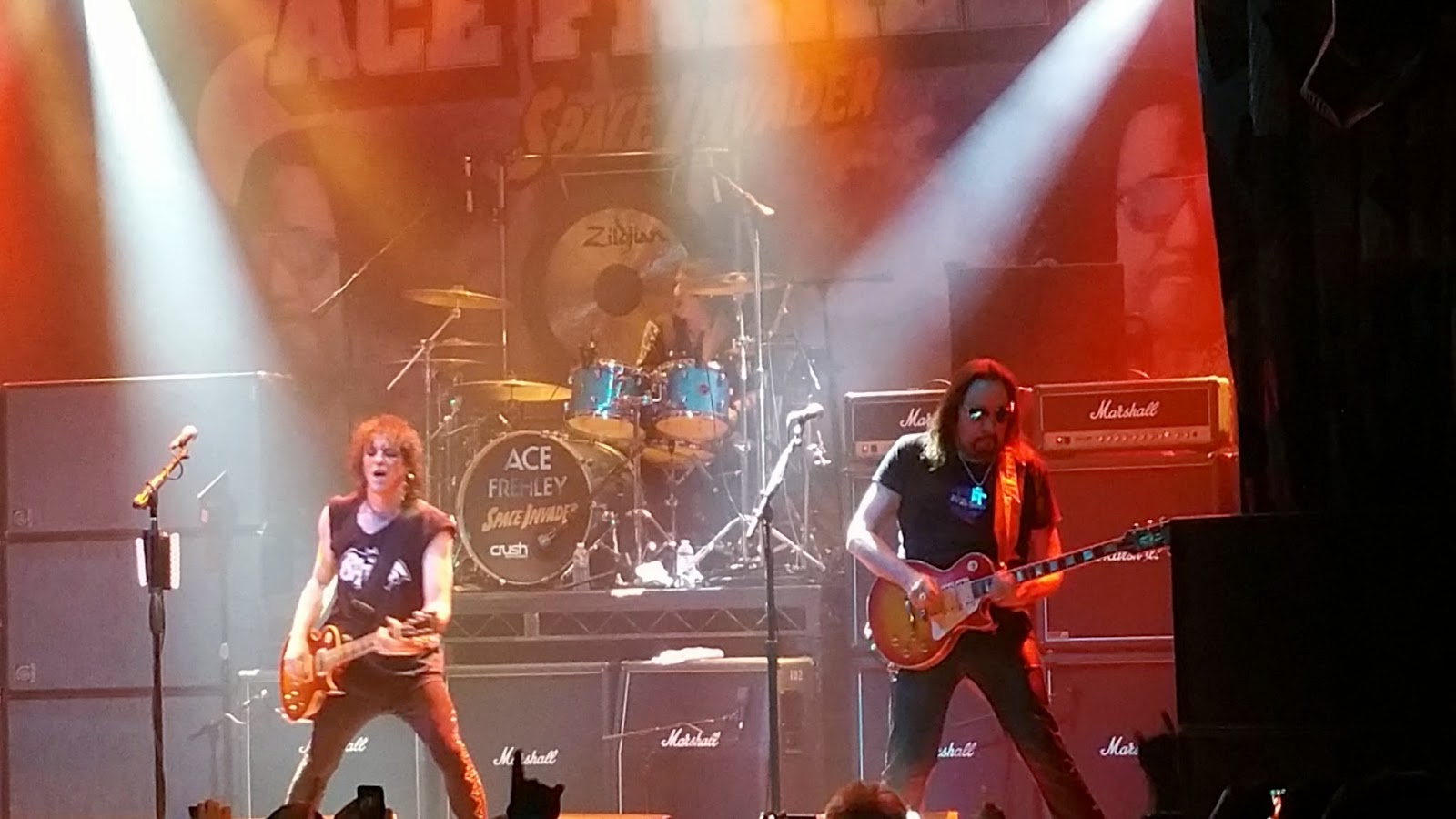 Ace and his band finally took the stage at 10:30 and just in the nick of time. The crowd, most of whom had now been waiting upwards of three hours were beginning to scream obscenities and make single finger gestures at the roadies or anyone else who dare walk onto the stage. Occasionally, a cup or other item would fly from the audience onto the stage. I had to squeeze in against the back wall of the room as there was no area roped off or saved for those of us doing the meet and greet. I learned from talking to people who had seen other shows that there were such accommodations. This must be venue specific so if you care about where you view the show from, do your homework before you pony up for the meet and greet. Once Ace came out and played that familiar intro to Rip it Out, all was immediately forgiven. Ace spend the next hour and forty five minutes ripping through a 20 song set. The band around him was tight and included, Scott Coogan on drums, Chris Wyse on bass, and familiar face, Richie Scarlet on guitar. All four took turns on lead vocals. Time and hard living has taken it’s toll on
Richie. Think Johnny Thunders meets Keith Richards. His playing and singing were not great this night, but he’s got that rock and roll attitude and vibe that makes up for it.

I’ll list the complete set list below but, as a fan of Ace, and let’s face it, the 900 or so other people in that room were not casual KISS fans, I would have liked to see fewer non-Ace KISS songs. While, drummer Scott Coogan does a fine job singing the Paul Stanley vocal, I could have done without the likes of Strutter, Detroit Rock City, King of the Nighttime World and Love Gun. I recognize that Ace was in the band when those were recorded and they contain some classic solos, to me, they just don’t belong in an Ace Frehley solo set. Whether I want to or not, I get nearly all those songs when I go see KISS. I would have much rather seen Ace break into, 2000 Man, Dark Light, Into the Night, Hard Times, Talk to Me, or almost anything else off the ’78 solo record. Let’s hope Ace will consider adding some of those in the set should he add more dates next year. 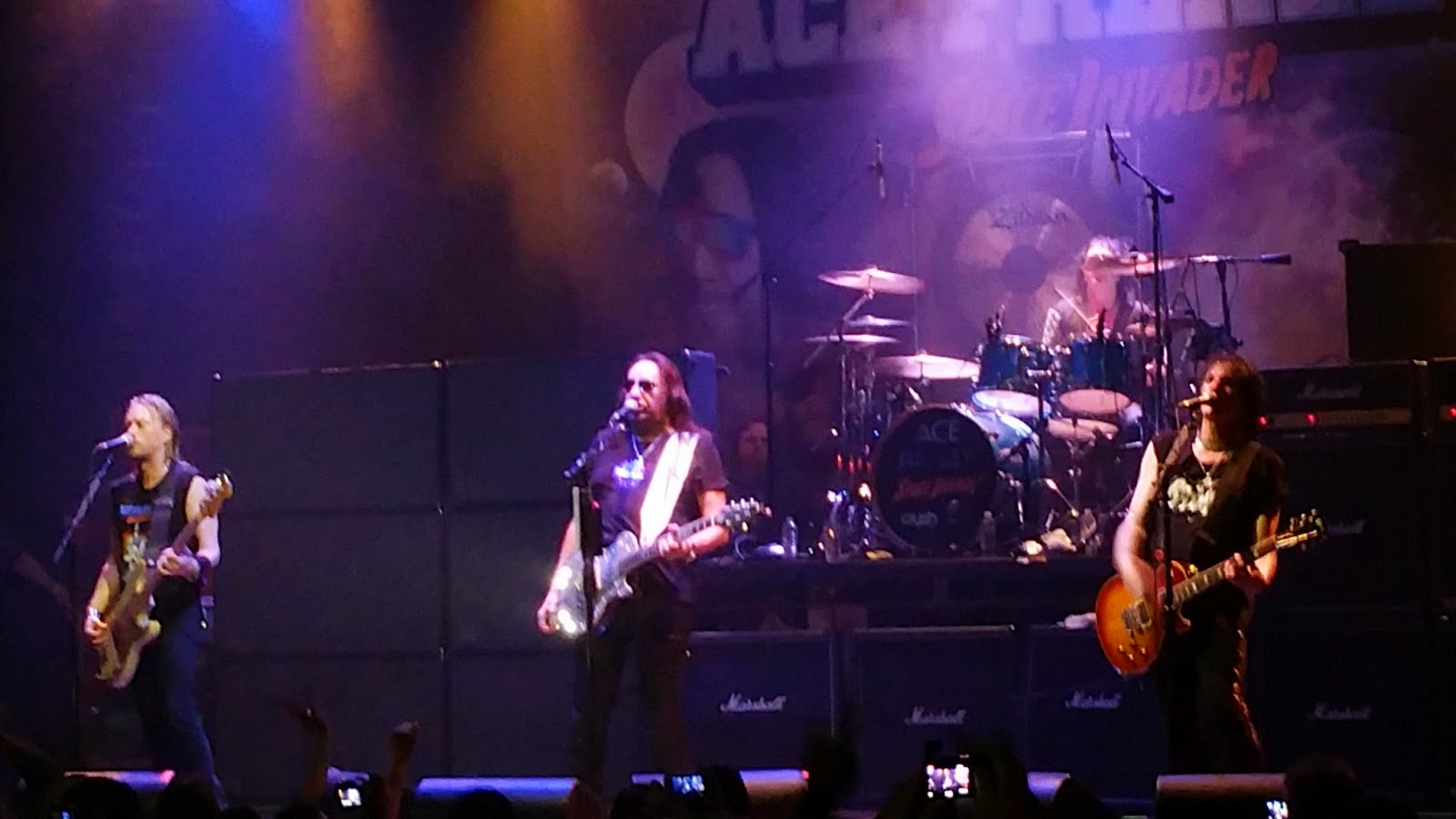 As I watched Ace, I really felt as
though he was playing with a chip on his shoulder. Like he had something to prove. There was a fire I hadn’t see maybe ever. Perhaps he was out to prove to Paul and Gene that he could still play a quality two hour set. Maybe that’s what drove some of his set list choices. At a couple points in the set, Ace couldn’t help but take a couple verbal digs at Paul Stanley from the stage. For as much trash talk that has gone on between the two camps in the press, it should stay there. Taking shots from the stage comes off cheap and unnecessary. I’ve never seen or heard of Paul or Gene take a shot at Ace or Peter from the stage during a KISS show.

If Ace was out to prove he could still handle the guitar duties in KISS, then mission accomplished. But as good as he played an sang, his punctuality and inability to put on a happy face for a meet and greet all but ensures that day will never come, and I’m just fine with that because, on this night,
Ace Frehley was great. 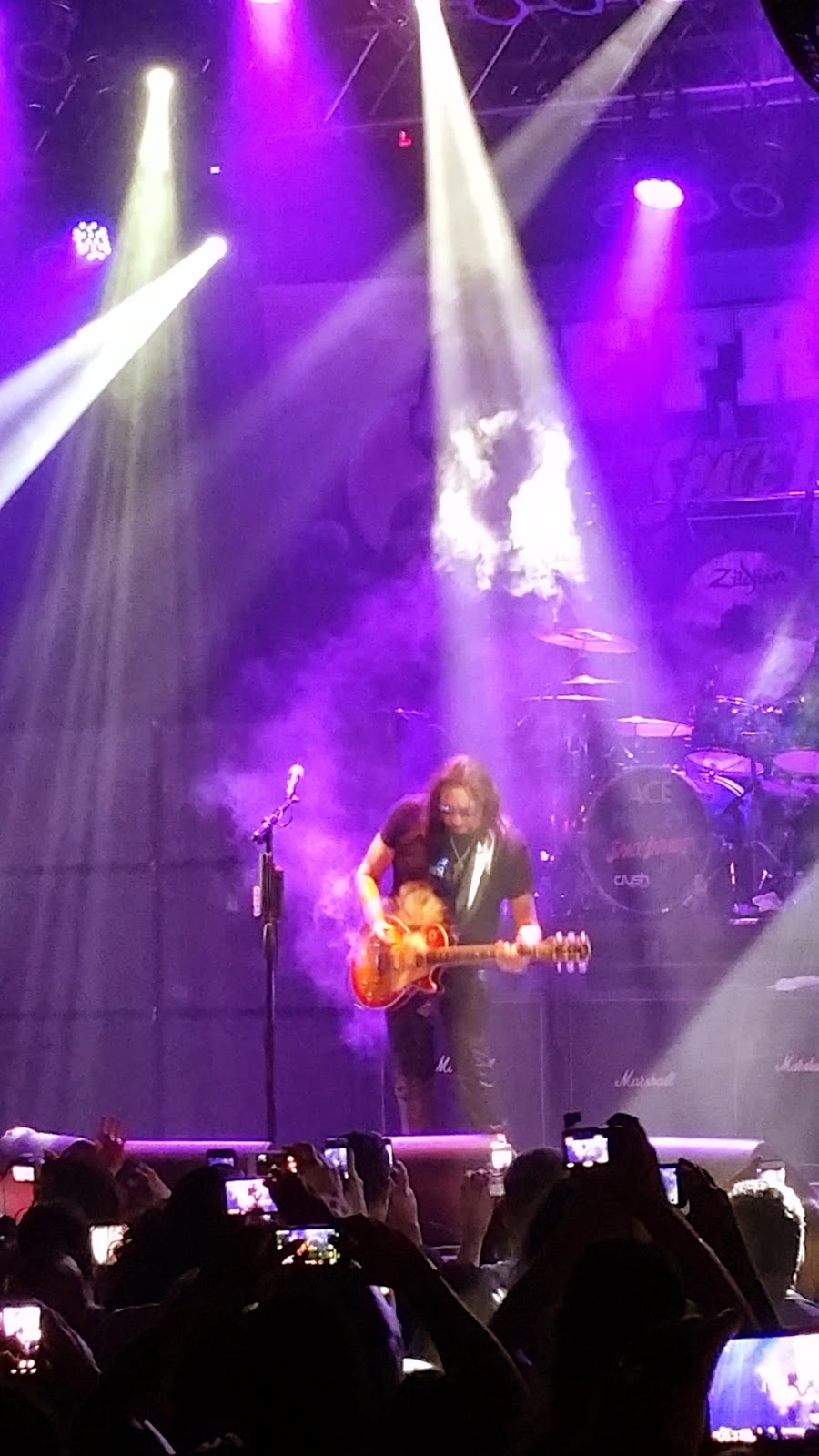