AN "ADRENALIZING" WEDNESDAY IN DUBLIN !! 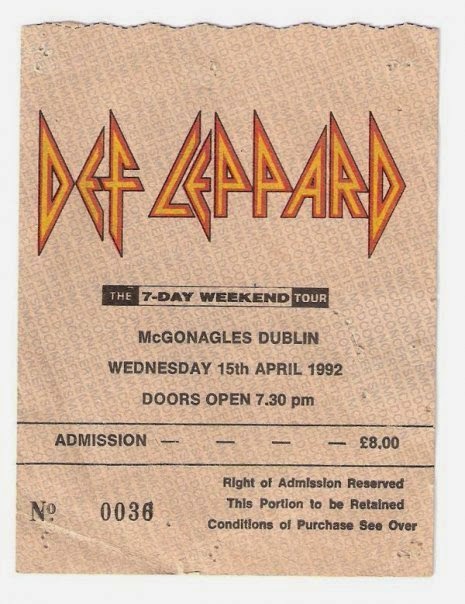 I’ve witnessed Def Leppard in some strange concert situations over the years.  The first one was in 1986, while on holidays in a seaside resort called Ballybunion,on the south west coast of Ireland. The Leps were doing a live rehearsal tour of the country in preparation for a series of Monsters Of Rock shows.  And also to get drummer, Rick Allen, back up to speed after his horrific car accident.  They played the local hotel, a run down little dump called the The Atlantic.  This place was a complete throwback to the 70’s, with a nicotine stained glitter ball swinging precariously from the roof.  The second was a year later, on the opening night of the Hysteria world tour.  This time the venue was a local bingo hall on the north side of Dublin, called the SFX.  Nothing special, just four beer and piss stained walls and a gaping hole in the roof.

Fast forward five years, it’s Wednesday and I’m in work getting lacerated with paper cuts.  I get a phone call around noon, it’s my buddy.  Guess what, he says, Def Leppard are playing McGonagles tonight, fuck off I say.  Tickets just went on sale,he continues, we haven’t a fuckin hope, I say, defeated.  The 400 tickets sold out in point 4 of a second.  The band were doing a warm up show for The 7 Day Weekend Tour, in support of their latest album Adrenalize.  It was also Vivian Campbell‘s first gig with the band.  He was replacing long time guitarist Steve Clark, who sadly passed away the previous year.  He was to be presented to the world the following week, at Freddie Mercury concert, in Wembley Stadium.  Despite not having tickets, we meet that evening anyway and make our way to the venue, with the faint hope of scoring tickets outside.

Let me describe McGonagles for you, it’s a legendary club on South Anne Street, just off the very posh Grafton Street, on the south side of Dublin.  It had hosted bands like Nirvana and U2 in their infancy, and was a well known venue for up and coming thrash metal bands.  And the interior, well, it was like a large toilet, with a hole in the wall for a bar, and box for a stage.  It smelled of damp leather and Spanish onions. Two hours to doors and we get approached by a suspicious looking character.  But, he was a suspicious looking character, with tickets.  This guy had a massive scar from his neck to his cheek with one eye facing north and the other facing west.  His breath smelt like he’d been French kissing a chain smoking camel.

With tickets at £8 face value, we offer £15 each.  Ah will ya fuck off lads, dirty, dirty (he meant thirty), was his response.  After about a half hour of this, we eventually agree on £50  for two tickets.  And he even had the good grace to escort us to the ATM.  The word “forgery” crossed my mind as we approached the door.  I nervously hand over my ticket, and just as I was preparing myself for the worst, there it was, stub ripped off, I was in.  Everything looked normal, drums, amps, lights, but I still had a nagging suspicion we had been, monumentally had.  That was until Leps manager, Peter Mensch, walked in my direction.  I greeted him like a long lost friend – he looked at me like I had Bubonic plague.  Despite my embarrassment it confirmed to me that this was no hoax, this was very real.  Def Leppard, one of the biggest bands on the planet, were playing this shit hole.

And on they came, I said welcome to my show, Joe Elliot screams, as they launch into a hair raising Stagefright.  They don’t let the crowd up for air as Rock! Rock! (till you drop) keeps the place shaking.  The mid tempo thud of Women lets us draw breath a little.  Just two songs off the new album, Adrenalize were played, lead off single Let’s Get Rocked and the reworked Tear It Down.  The main bulk of the set consisted of the Pyromania and Hysteria albums.  The last hour of the show was the most memorable for me.  With classics like Foolin’, Rock Of Ages and Armageddon It, all following each other.  I was in hard rock heaven.  1987’s comeback single Animal, was followed by a blistering version of Queen‘s, Now I’m Here, due to be performed with Brian May at Wembley Stadium the following Monday.

New guy Vivian Campbell, on home soil, fitted effortlessly into the band.  He traded licks with Phil Collen like he’d been in the band 20 years.  Joe Elliot gave him a “welcome to the family” introduction much to the delight of the sweat soaked crowd.  After the encore of Photograph and Tear It Down, the band exited and the “house light” came on.  And that was it.  Bar witnessing the birth of my two children, this was one of the most exhilarating experiences of my life.  I have yet to be at a gig that had as much energy and intensity.  I actually saw Ozzy at the same venue a couple of years later, great gig, but not a patch on Leppard.  Sadly, McGonagles has since been demolished,  I like to think that the wrecking ball that was Def Leppard,on that Wednesday in April, cast the first blow.