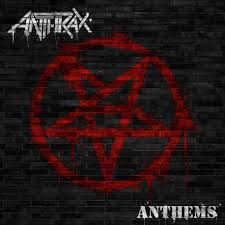 Cover albums are certainly nothing new. Bands have been doing them for years. Often viewed as “unnecessary” by many fans, I always view them as a treat, something a little different and a look into what music my favourite bands are into. I imagine for the artist, it would be a fun project getting to rock out to some of their favourite tunes without the pressure of record labels and writing original material.

From Skid Row’s “B-Sides Ourselves” to Halestorm’s “ReAniMate – The Covers EP” I am a sucker for these albums as I truly enjoy hearing the new versions of songs that influenced my favourite artists. In fact, in some instances it has made me seek out the originals and opened up new bands for me to explore. The Skid Row EP had me searching out the Jimi Hendrix catalogue back on the day after hearing their version of “Little Wing”

So last week Anthrax released their new cover EP entitled “Anthems”. Anthrax are no stranger to recording cover tunes as they have often rolled tape and given us some great Kiss covers “Love Her All I Can” and a killer version of “Parasite” come to mind. The EP is made up of 6 covers and then a couple or remixes of the song “crawl” which is found on their last album “Worship Music”

As I slipped on the headphones and checked the volume (nice and loud like) I hit play to hear the opening chords of Rush’s “Anthem” from the 1975 Fly By Night album and Anthrax was off and running. Sounding very true to the original I was actually quite shocked to hear Joey’s vocals, for the first verse and chorus he turned in quite the “Geddy” clone voice which settled back into his own voice as the second verse got going. These guys were obviously having some fun. 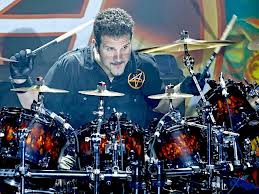 The song even made me laugh twice because let’s face it, we Canadians take out Rush pretty seriously. We don’t just listen to Rush, we study and analyze these songs. Dissecting and devouring them, so time to geek out on this track for a second. Now Neil Peart quite possibly the supreme ruler of rock drumming. If you don’t agree, check out the band live.

So for the total die hards, listen closely to Charlie. At the beginning he throws in this very loud cymbal accent after the intro part. This sounded completely out of place from the Rush version but sounded very Anthrax and it made me smile. Next, he adds a little percussive fill in the middle of the song that is certainly a tip of the hat to Mr. Peart. and lastly he ends the song with the oriental fill from “Passage to Bankok” from Rush’s 2112 album.

Who better for anthrax to cover than AC/DC? “TNT” from Bon Scott and the boys gets the nod in another true to the original cover. I am starting to notice Mr. Chameleon on vocals as his impression of Bon Scott is pretty convincing. I once ears someone say “you have to be communist not to like AC/DC” and the Angus riffs are flawless here. “Oy!” 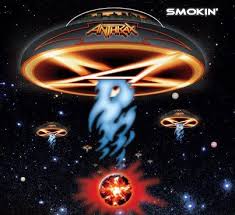 Two tracks in, I am digging this EP but up next is a cover of Boston’s “Smokin”. I have a simple one word review of this song, “WOW!” They freakin’ nail this song. Belladonna once again goes chameleon and turns on a silky smooth vocal, and the keyboard work (courtesy of Fred Mandel) is completely off the hook.

Now the next couple tracks, Journey’s “Keep On Runnin” and Cheap Trick’s “Big Eyes” are a little less familiar to me. That said, both rock and maintain the sound and vibe of the original bands. I had to smile as “Big Eyes” kicked in, Cheap Trick just has a certain sound that I knew immediately who they were covering even though I had not heard the song previously.

Closing out the covers part of the EP is Thin Lizzy’s “Jailbreak”. Not breaking the formula, Anthrax play this song close to the bone. Playing the Thin Lizzy classic with all the conviction and soul of the original and yet again we get another vocal that echoes the late Phil Lynott in tone and inflection. 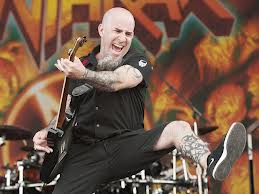 As a bonus, the band includes two versions of the song “Crawl” from the Worship Music album. This is a great song from a great album but personally I would have enjoyed a couple more cover songs as I was quite honestly disappointed that the EP had come to an end. This EP really showcases the vocal prowess of Mr. Belladonna combined with the fun loving, mischievous energy of early Anthrax albums. Wearing their influences on their sleeves, they seem to be having a blast playing some great classic songs and that fun is infectious to the listener.

Now if you will excuse me, I have been inspired to go look up some Cheap Trick and Journey music.