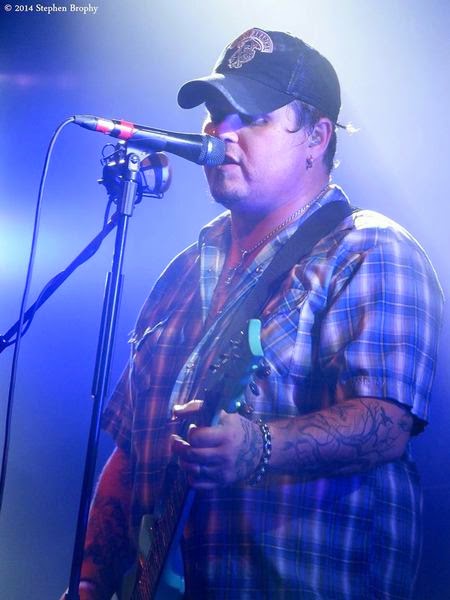 A little over 700 people packed this tiny Dublin venue to witness the Kentucky rockers unleash their brand of Southern fried hard rock.  With a set spanning their four albums, this was a band hell bent on making this chilly Thursday night, a memorable one.

Launching into Rain Wizard, from their self titled debut album, Frontman, Chris Robertson‘s opening roar of “here comes the rain”, set the tone for the night straight away.  A brilliant Blind Man was followed by an ear splitting Me And Mary Jane from their new album Magic Mountain.  The energetic rhythm guitarist, Ben Wells, and bassist, Jon Lawhon, swap stage positions like men possessed.

On In My Blood, Robertson lets the crowd take stage singing the chorus.  The clearly moved singer tips his cap in appreciation.  A nice moment.  Another new song, Holding On…To Letting Go, gets the energy pumping again. Next, they get their Zeppelin out on the riff strewn, Maybe Someday, leaving the crowd gasping for breath.  The great thing about Black Stone Cherry‘s music is it’s sincerity, it’s guts, and how their songs take on a whole new meaning in a live setting.  Evidence of this is clearly seen on Remember Me, and the sublime, Like I Roll.

After Bad Luck And Hard Love, drummer John Fred Young gave a five minute masterclass, that was probably felt anywhere within a fifty mile radius.  Young reminds me of a human version of Animal from The Muppet’s, but Robertson summed it up best by simply calling him a beast.  The band return and raise their glasses to their roots with Hollywood In Kentucky,brilliantly performed with a Southern swagger.  If anybody in the crowd thought the band were taking their foot off the gas, then they must of got the fright of their lives for what was about to follow.  Bang – Boom – Bang – Cherry classics, White Trash Millionaire, Blame It On The Boom Boom and Lonely Train hits the crowd firmly between the eyes.  And just to finish us off, 30 Seconds Of Death Metal is the parting shot. 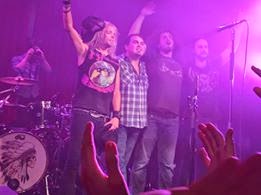 Encore, Peace Is Free, closes the night on an inspiring note.  An emotionally drained looking Robertson once again gives the Cherry faithful the mic, who pay him back with interest. Performances like this are proof that Black Stone Cherry are one of the best live acts around today.The quality of their music grows with every album release, and the chemistry between them is infectious.  These are four guys who have known each other since childhood and have a genuine bond.  And an even greater one with their audience.   Apart from this flawless performance, it was heartening to see a young audience at a proper rock show.  And also, to see them with their fists in the air, and not a sea of smart phones.  A memorable night.