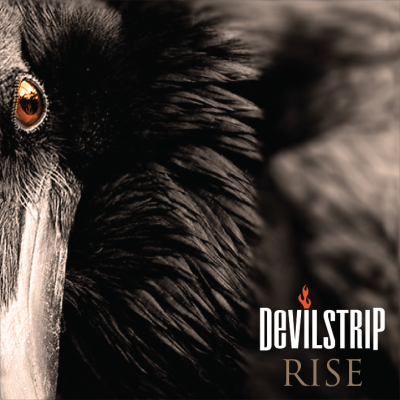 When I think of brilliant, three piece rock bands, straight away the likes of ZZ Top, Rush, Cream and Motorhead spring to mind.  These are all bands who emerged in the 60’s and 70’s, and, with the exception of  The Winery Dogs, nothing is really turning my head at the moment.  But having just discovered this power trio from Ohio, my luck has definitely changed.

Devilstrip‘s debut album Rise, incorporates melodic rock brilliantly blended with hard edged riffs.  Right from the opening track, Not What You Need, you immediately get the impression that this isn’t your average weak boned trio.  This is a powerhouse of a song, played with rhythmic intent. The bass led verses of Go, quickly ascend to a bombastic chorus.  A perfect choice for a single release.

If your partial to a bit of funk driven rock, then you’ll love Including Me, featuring grimacing vocals from Marc Wasmund.  Also, some throbbing drums from Jimmy Gray.  The nasty riff work on Are You Ready, compliments this melodic gem perfectly.  This is a song that is sure to take on a new life when played live.  Kill The Headlights(Roll) ups the speed of the album to an explosive pace, featuring a Steve Harris like, galloping bass line from Graig Lingren. 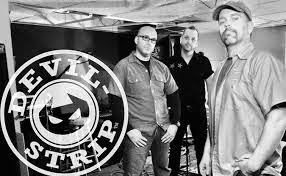 The only real criticism I have of Light Up The Room, is that it just isn’t as meaty as the previous tracks.  It’s by no means a filler, but it doesn’t get me off  my seat.  Any hint of negativity is firmly put to sleep on the haunting Love, Hate, Die.  Wasmund‘s vocals put a classy stamp on this arresting track.  Closing track She Said, is the nearest thing to a power ballad on the album, but it retains enough grit and macho emotion to lose that tag.

So if you love discovering new rock bands who are making music a little bit left of centre, you’re not going to do much better than this.