Diemonds are a Toronto Ontario based band and while you maybe haven’t heard of them yet, I’m sure that you will soon!  They are getting out on the circuit playing tons of gigs and making a name for themselves, something easy to do with their great songs and infectious stage performances. 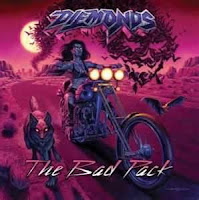 Diemonds are a Toronto-based, female fronted hard rock band founded in 2006 and comprised of Priya Panda (vocals), C.C. Diemond (guitars), Daniel DeKay (guitars), Tommy Cee (bass) and Aiden Tranquada (drums).  This quintet issued their first full-length record, The Bad Pack in October 2012 and prior to that an EP, In The Rough in 2008.  Diemonds have brought their brand of booze soaked (sponsored by Jagermeister and Pabst Blue Ribbon, no less!) rock and roll far and wide opening for big names such as Slash, Steel Panther (which was my first complete show Diemonds live performance, see my review of the show: Diemonds Shine Brighter than Steel), Jack Russell’s Great White, L.A. Guns, Teenage Head and Faster Pussycat to name a few.  They have played at Heavy Mtl in 2012 (a two-day rock festival held in Montreal,Canada), Rocklahoma (2012) and they even made history being the first female fronted hard rock outfit to play in the city of Shillong, India.  They have toured the US and Canada on several occasions and are hard working, relentlessly touring and always on the road.  In November I went to Memphis, Tennessee to see Tora Tora‘s 25th anniversary concert (to read my account of that adventure: https://steeletech.us/decibelgeek/?p=705) and I even saw their CD for sale in a record store down there, right on the shelf next to Sister Sin‘s new release, Now & Forever, whom Diemonds play with on February 7th as they open for the legendary Doro.  Yet I can’t find The Bad Pack in a store here in Canada! And now on January 23rd the awesome cover artwork of The Bad Pack will grace the shelves in stores of Japan in a release via Spiritual Beast Records.  I even saw The Bad Pack hit a top ten albums of 2012 list and it wasn’t my own….or esteemed Decibel Geek cohort, Wally’s….lol…..both of which saw it in there, however!  Ron Keel even spun a Diemonds track on his Streets of Rock & Roll radio show recently!  That sounds like a band on the rise to me, better jump on this train before it blows by, leaving you in the dust! www.diemonds.net

Diemonds rolled into Barrie, Ontario making a stop for their Dead of WinTour schedule last night and lit the small, but very cool Foxx Lounge venue on fire!  As I entered the club I immediately liked this intimate venue with the stage on the right and the bar on the left.  There was a giant screen behind the bar showing the classic Snake Plissken and his Escape From New York movie as the first band came on to set the stage, playing against The Bad Pack artwork backdrop.  The sheer volume in the little club was deafeningly loud, which in my ears is perfect for a real rock show!

Unfortunately, I missed the name of the first band hitting the small stage, but they blasted through their set getting the crowd warmed up and into it.  A little heavy for my taste in some parts (I’m not a real fan of the “Cookie Monster” style of vocals), but they were very good and a couple of the songs had me grooving right along, the highlight being when the singer dedicated a song to his Mom down in front of the stage “’Cause Mom loves this shit!” I’ll have to investigate a bit further and find out who they were. 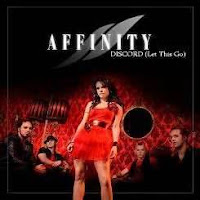 Affinity, a female fronted rock band from Toronto took the stage next and they were very good as well.  The five-piece band looked quite young, but played well and were a cohesive unit even doing a decent job covering a Foo Fighters track.  They showed good stage energy and during the last song the bass player wandered off stage and out into the crowd.  After the set, I purchased their CD, Solid Ground from singer Ashley, who seemed very nice and appreciative of the support.  She also told me that they have been on bills with Diemonds a few times in the past. 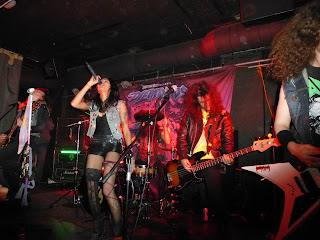 Reportedly the next band scheduled was Outbound Flight, but they dropped out, leaving Violet Society to take the stage next.  The owner or manager (presumably) of the Foxx Lounge gave an introduction as Violet got ready on stage.  They blasted into the first song, very heavy and a good sound musically, but the vocals were not a style that I personally prefer (Cookie Monster).  They had an excellent stage presence and obviously a bit of a following judging by the reactions of the crowd.  The singer was extremely charismatic and was often off stage and mingling in the crowd during the set.
Diemonds (not “Dee-mons” I should mention…..never figured out why some folks pronounce it like that) hit the stage at around midnight, assaulting us with “Trick or Treat” from The Bad Pack record, followed by “Loud & Nasty”.  It was easy to see that the band was in top form this evening and were obviously loving being up on stage.  Priya recommended to the crowd to tip your bartender and make sure you don’t drive home as you’re gonna party with Diemonds tonight for the first time since 2008!  They blasted into their latest video release of “Get The Fuck Outta Here” and once again, just as when I had seen them live before I was struck by Priya‘s beauty, but don’t let that sway 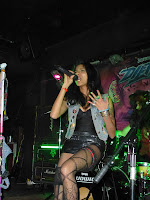 you, the music stands alone and her attitude and vinegar can be heard oozing through the lyrics and fuelling her stage performance.  Next up was the title track to the full-length début The Bad Pack and from there they played a new track that they have been working on, not sure what it was called but, damn was it good, fitting right into the catalog even reminding me of Motley Crue a little.  Priya then let the crowd know that the band had spent the afternoon at Misty’s Cafe, hanging out with some of Barrie’s finest ladies.  Daniel quickly added that they looked but didn’t touch, he swears as they started into “Take On The Night” and rolled right through into an awesome AC/DC “TNT” cover.  A personal favourite for me is “Little Miss” which sounded amazing live and brought C.C. and Daniel down into the audience with a sort of duelling guitar show.  In the video for “Livin’ Tonight” the band is seen shot gunning Pabst Blue Ribbon 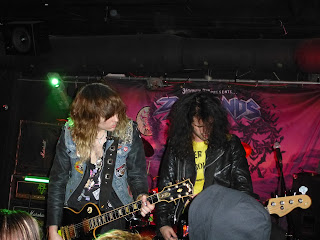 beers with “Deaner” from FUBAR and here on stage Daniel invited a young lady up on stage to do just that with him as they “drank a beer his way” before cranking out the song.  “Mystery” was next which brought us into a short drum solo to lead us into the only cut from the In The Rough EP with “Highway”. They exited the stage briefly before returning and pounding out a song that Priya jokingly proclaimed that they wrote back in 1987 as they ripped through Skid Row‘s “Youth Gone Wild”.  A bit ironic perhaps as they were slated to open for Sebastian Bach a while back at The Rockpile Bar & Nightclub in Etobicoke, Ontario before Bach had to cancel the performance.
In talking with a buddy at the show, another Diemonds follower, he was even able to see them the night before in Alliston, Ontario as well. He told me saw a guy on the Shiprocked cruise wearing the Diemonds shirt. Assuming he was from Toronto struck up a conversation, quickly learning that he was actually from a southern state (forgot which one) and he had been turned on to Diemonds by their Rocklahoma performances, so the band is definitely getting noticed…..if you’re not in the know I highly recommend you correct that pronto!  A Diemonds live performance is like a thrilling roller-coaster ride, if you’re already familiar with Diemonds then you know what I’m saying, if you’re not, I highly recommend that you rectify that and get out to catch them live as soon as you can.  Here’s the next few dates in Ontario and Quebec:

I’ve been spinning The Bad Pack CD over and over all day long after last night’s show and can’t wait until February 7th when I get the opportunity to see them set the stage for two other truly amazing female fronted bands in Sweden’s Sister Sin (read my interview with vocalist Liv Jagrell: https://steeletech.us/decibelgeek/?p=722) and the “German Metal Queen” herself, Doro!