Drum Wars…..or is it Geek Wars? 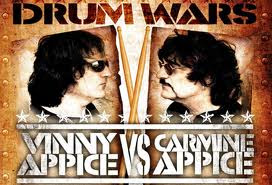 A few weeks ago The Canadian Decibel Geeks (well, I guess I have to be careful now as Wally and I are the “original Canadian Decibel Geeks”, having been recently joined by my friend Kate Campbell as our newest writer.  Kate was also hoping to join us this night, but prior commitment prevented it), Wallygator and The Meister headed out to catch Drum Wars showing at The Rockpile Bar & Nightclub in Etobicoke Ontario. This review is rather late in it’s posting and both Wally and I apologise for that as we were having issues surrounding our conflicting schedules to meet up and hash out our own “Geek Wars”.

I would like to point out that the evening of May 10th provided me with a real dilemma  Soon after getting word of Drum Wars, I also found out that Motley Crue would also be performing nearby on the same night. Having already confirmed the Drum Wars show I was suddenly pained to realize the compromise I would have to make. Motley Crue was my first ever concert and I haven’t missed many of their shows for any reason. 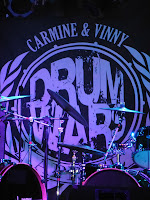 Both Wally and I were no strangers to Vinny Appice, having seen Kill Devil Hill back in August?? and having the opportunity there to meet Vinny.  Then Wally had the pleasure of doing a phone interview with him for an article on Drum Wars itself.  Drum Wars is a rock show put on by Vinny and his duelling drummer brother Carmine.  Wally was clearly in support of Vinny Appice and I rose to the challenge backing my guy in Carmine Appice.

Vinny has drummed for the likes of Dio, Black Sabbath, Heaven & Hell and now Kill Devil Hill.  His older brother, Carmine has sat behind the kit for Cactus, Rod Stewart, Vanilla Fudge, Ozzy Osbourne, Ted Nugent, King Kobra and Blue Murder.  Quite Obviously the skin bashing skills are abound in the Appice brothers and on May 10th, 2013 they brought Drum Wars to the Rockpile. 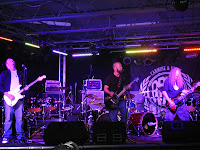 Starsik was the first band to take to the stage with it’s odd arrangement.  You see there was not a lot of room for the band given that the two drum kits of the Appices sat down on the lower level off of the drum riser and took up quite a bit of real estate.  With Starsik’s drum kit crushed into the right corner of the stage they blasted through their opening song called Silence.  These kids were obviously from Barrie, Ontario when they announced that they had been the winners of Rock 95’s (the Barrie radio station) Rock Search competition.  They were quite entertaining with funky grooves and a good stage presence.  They played musical instruments, well obviously!  But I don’t mean that, more like musical chairs as the drummer shared  many of the vocals with the rhythm guitarist, but for a couple of songs the lead guitarist and bassist switched instruments.  That wasn’t the end of “musical instruments” as the drummer came out from behind the kit and took up rhythm guitar while the guitarist bashed the skins.  Really fun and cool to see such talents.  Their set list included songs such as Special In My Heart, Fourteen Minutes, The Devil and Red, Black and Blue.  The latter was a great song and apparently has been seeing airplay on Rock 95 for about a year.  Watch for their upcoming CD due out June 15th, sure to be loaded with tons of crunchy guitar and pounding rhythms.

Violet Society was up next and I had had some previous experience with them when they opened up for local favourite Diemonds some time ago in Barrie, Ontario.  They are a little “cookie monster” in the vocal department for my tastes, but they do have a following and a friend of mine from work also works his second job with a member of the band. 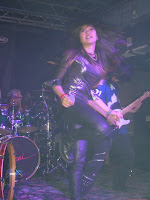 A band that has come straight into the cross hairs of The Decibel Geeks is J’nai.  This band just gets better and better each time we see them.  Lead vocalist J’nai’s wacky dance moves and intensity on stage are winning over audiences every time they play.  The rest of the band is an incredibly tight unit and obviously practice regularly.  These kids put on a great show as well and I was happy to see them with good placement appearing right before the head liner.  A few weeks earlier they were set to open for Loudness, but when Loudness had to cancel due to unforeseen circumstances, I took an extra shift at work.  No sooner did I commit to that did J’nai announce that they would still be playing at the show and would do an extended set!  Dammit!  That’s something that I dearly would love to see, but in any case we move on and they opened tonight with their amazing cover of Heart’s Barracuda, once again blowing it away.  In The Light saw the synchronised bouncing of all four that we’ve come to know and love, there was hardly enough room on stage for them tonight with their 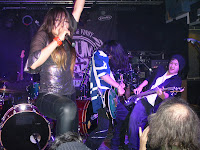 energetic moves.  My absolute favourite song Skipping Stones brought the simultaneous kicks in the air, it might be gimmicky a bit, but I love every minute of J’Nai’s new and fresh live show.  They dedicated Defeat Them All to Toronto’s hockey team (who had just won their game that night, but would shortly thereafter be put out of the play-off’s) and the guitarists performed their signature guitar switch, where they each toss their instrument at the other, catch it and continue playing!  Closing out with Guns n’ Roses classic Welcome To The Jungle or as J’nai sung “You’re at The Rockpile baby” was the perfect end to another awesome set! 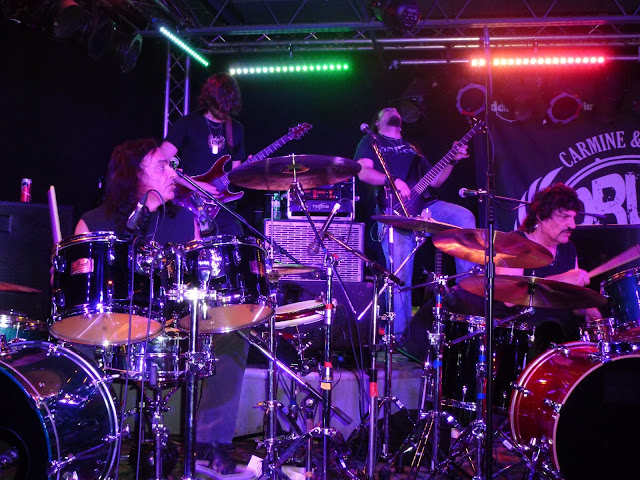 The lights dimmed and the show began with a wresting style intro announcing both duelling drummer brothers and their accomplishments. Brothers will be brothers and Vinny certainly set the tone of the evening with his intro tape int
roduction that had Carmine weighing in at over 300 pounds! This sense of humour would continue throughout the show. The drum sticks were twirling in the air and the synchronisation of the brothers was awesome to watch from our vantage point down in front of the stage.  Then the sticks flew between each other as they attempted the exchange in a rather entertaining “Three Stooges” style of move.  The pounding version of Mob Rules that they treated us to with both of the brothers drumming in incredible synchronisation gave the song a new life of its’ own. 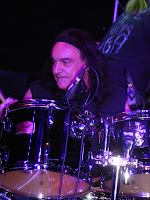 Then the duets were over and Carmine vacated his seat behind his set as Vinny showed his prowess with the assistance of the band that they had brought with them featuring Eddy Levitsky on bass, Manuel Iradian with the guitar and Nick Guerin handling the mike.  They ripped through the Dio classic Holy Diver and I was reminded of the recent announcement that Vinny would be joining Dio Disciples when they hit The Rockpile in July.  Carmine was not totally out of the picture as he assisted on the vocals with Mr. Guerin.  “Anything you want to hear?”, Vinny addressed the crowd afterwards.  The response was met with a resounding chant of We Rock, on which they promptly accommodated  Carmine still assisting on vox.

Ok, I am clearly a member of Team Vinny for one simple little reason, I love Carmine too but that little reason is simply – Ronnie James Dio. Whether it be Black Sabbath, Dio or Heaven and Hell, the combination of Ronnie and Vinny is magical and gives me goosebumps that very few bands can. Hearing these songs “Mob Rules, Holy Diver and We Rock” live once again was simply amazing and I declared Vinny the winner right then and there m/!

Before much else could take place we had to call in the drum tech as Vinny broke a snare.  Vinny’s eleven year older brother Carmine now seated once again behind his kit passed a snare from his rig over to his brother adding, “what are brothers for?” as they joked back and forth.  We were next treated to the dual drumming of both brothers on an updated heavy version of the Flintstones Theme song before Carmine got his chance to impress with a little solo and some stick tapping, getting us to follow his movements with our clapping hands. 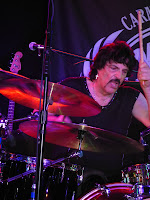 Carmine then called for us to out do the cheers for Dio as he rolled into Ozzy Osbourne’s Bark At The Moon and the singer, Nick Guerin sounded really very good, even having Ozzy’s tell tale laugh down pat.  A song that Carmine co-wrote and went to #1 in every country was next up and the heavy rock sound of this version of Rod Stewart’s Do You Think I’m Sexy? sounded awesome as Carmine sung the verses.

With Vinny’s snare issues finally repaired we were treated to dual drummers again for Black Sabbath’s Lady Evil. Ok this might have been the highlight of the evening for me as having two of the greatest drummers driving one of my favourite Sabbath songs ever was magical. There is nothing quite like the sound of two drum kits in perfect synch. 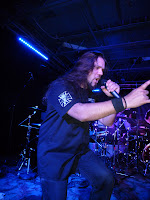 This led into a little drum stick war in which Vinny came up with some very flaccid sticks!  Vinny the gave us a solo before the brothers ripped into a tribute to Ozzy with Crazy Train as they had both played with him, something that I did not know previously.  Again the singer sounded good on Crazy Train and the guitarist, Manuel Iradian was no slouch either.  For the encore the brothers switched kits and pounded out Black Sabbath’s Paranoid followed by Cactus’s Evil.

Wally and I, feeling elated by this excellent performance decided to follow suit with the brothers as there was no clear winner in the war, (I still say Vinny won) we declared each of winners for having seen the show and celebrated our successes with another frosty adult beverage.

No doubt about it, the Appice brothers are rock royalty and the history of the music they have been involved with is undeniable. I can’t even count the number of times I have seen one or the other live, with Dio, King Kobra, Heaven and Hell, Blue Murder, Kill Devil Hill and every show has been spectacular. The chance to see them both on the same night, up close and personal was a once in a lifetime treat that I will cherish forever. The fact that I missed a Motley Crue show on the same night was no longer a crisis. The Rockpile was the place to be on May 10th, 2013