Go See The Doctor-An Interview with The Treatment 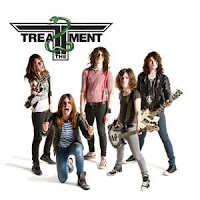 Many of you have probably not heard of The Treatment before unless you’ve seen The Tour 2012: Kiss and Motley Crue this summer.  The Treatment is the opening act for the rock giants and I was excited to hear that they were on the bill.  I discovered the CD through a review on another website and always searching for new bands and music, I purchased their debut album This Might Hurt without hearing a track.  Holy crap, I was not the least bit disappointed and the more I listen to the album the more I enjoy it. Just when I have my favourite track decided, one of the other ones gets stuck in my head and just like that it’s changed…..a perpetual state of confusion as every track is a standout rocker through and through.  Do check out “Shake the Mountain” or “Lady of the Night”, wait “Departed” is good too……..and “I Fear Nothing”…….dammit listen to the whole album.
.
The Treatment originates from the Cambridge area of the United Kingdom and got together in 2008, founded by drummer Dhani Mansworth when he was just 15 years old.  Mansworth recruited Matt Jones to hold the microphone, Ben Brookland and Tagore Grey ripping the dual guitars and Swoggle (also known as Rick Newman) to plunk the bass.  This five-man outfit recorded their CD at Barnyard Studios owned by Steve Harris of Iron Maiden fame.
. 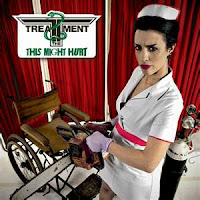 Even the CD cover screams rock depicting a kind of sexy nurse holding a chainsaw as opposed to the flimsy designs, artwork and band pics that seem to adorn today’s CD’s.  The only thing that gives away their young age of 18 is the energy, antics and stage presence.  The song-writing here is clear and concise.
.
Drummer and founding member, Dhani, had grown up with the likes of AC/DC, Aerosmith and Led Zeppelin and he had the idea of the kind of band that he wanted to form.  He found his fellow members from areas outside of Cambridge.  Ben came from Tadley and Rick and Tag from Petersfield.  Packing their bags the boys all moved into Mansworth’s house with his parents so that they could rehearse every day.  In Norwich, they found Matt six months later and within a week he had also moved to Cambridge.
.
Look and listen to “The Doctor” here: https://www.youtube.com/watch?v=yaBe2hcZDdw&feature=player_detailpage and “Nothing to Lose But Our Minds” here: https://www.youtube.com/watch?v=CavppF7iRFQ&feature=player_detailpage
.
I was able to catch up with vocalist, Matt, via email a few days before the curtain goes up on the show in Toronto.
.

The Meister: I’m sure that you guys have been asked these same questions about a hundred times now, but hopefully, we can help introduce you to some new fans. Where did the band’s name come from and who came up with it?
.
Matt: The band name came from a love from a mid 70’s band from England called Dr. Feelgood. Dhani suggested it and it just stuck from then on.
.

The Meister: Now, you guys are only 18 years old, is that correct?  Maybe you could introduce us to The Treatment and everyone’s role?

Matt: Some are we age from 18-21. Dhani Mansworth is the founding member and Drummer, Rick “Swoggle” Newman plays Bass, Tagore Grey plays guitar, Ben Brookland plays guitar and I sing.

The Meister: I’ve heard comparisons to Def Leppard, UFO, Aerosmith and Guns n’ Roses, all great bands.  How would you guys describe yourselves?

Matt: They are all great bands! We have grown up listening to all of these bands. I would describe us as a classic rock band but with a modern edge. We also listen to current rock music and pop so there is a youthfulness to our sound too. But we don’t shy away from our AC/DC Judas Priest roots.
.

The Meister: I read that you all moved in with Dhani Mansworth in the beginning.  That must have been a bit of a madhouse?

Matt: It still is! But we love living together. It’s a hub of activity. As Laurie is the producer of the records it makes recording in his studio really easy. as soon as an idea is formulated, we get straight into the studio and start working. the best thing though is that we are a bunch of friends, so who wouldn’t want to live with their mates? We are constantly having fun.
.

The Meister: How did that help or contribute to the writing, recording and playing process?

Matt: We all write the tunes together so we can get the bare bones of a song and present it to Laurie straight away and he can go and work his magic on it there and then. It’s perfect! It helped us massively. As we all moved down as ammeters it meant we could all learn our craft together and learn as a group. we are all in one place to help each other out which is great.

The Meister: You guys have accomplished quite a lot in the few short years that you’ve been together, what do you attribute that success to?

Matt: Its down to hard work. From everyone. From day one we have always said this is our dream and we would not stop until we get there so all of us work at what we do and are never satisfied. But also its hard work from our management Laurie who never stops and everyone else who is behind us.
.

The Meister: This tour is a great opportunity for a new band, how’d you get on tour with these heavy hitters?

Matt: It started with Nikki Sixx tweeting about us and sharing our video. Then it was a case of our management getting in touch with their people and it was all worked out. It’s amazing to here with these bands that we have all grown up being fans of!
.

The Meister: I understand that this is the first time any of you have been in North America.  How’s the feeling playing these huge stadiums and the crowd reaction? 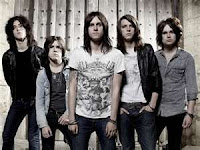 Matt: Its a dream come true just to be here let alone playing these shows. This country is fantastic and as a kid growing up it is where you want to come and play so we are very privileged. These are the biggest shows we have done so its brilliant exposure.
.

The Meister: Has KISS/Crue given you any words of wisdom or advice?  Have you had the opportunity to hang out with them at all?  Any good road stories to share?

Matt: Yeah we have met them all loads of times now. Everyone is really friendly and have made us feel very welcome. On my 21st birthday, I was lucky enough to have two strippers in Tommy Lee‘s dressing room and while they were doing their thing Tommy and Nikki made sure I was drenched in Vodka. It was surreal but very fun!
.

The Meister: Are you playing any off date shows while you are here, or is the schedule too gruelling already?

Matt: Yes we are! we hate the days off so we would rather play shows. We have done a couple already and we have been surprised by the reaction we have got from the new fans. Loads of people coming to see us and even knowing the words to our songs!
.

The Meister: After watching your Tour Diaries Part 1 & 2, it looks like you guys are having a blast aside from the heat that you’re not used to!  How are you guys managing in the close quarters of the tour bus?

Matt: Yeah the heat on the first part of the tour was unreal! being from England we aren’t used to much sun haha! but new experiences are what it is all about. as for the close quarters it’s no different than being at home so we aren’t struggling with that.
.

The Meister: I’ve seen the videos for “Nothing to Lose” and “The Doctor” on You-Tube, both great videos.  What was it like filming them and are either videos getting airplay here in the US or Canada?

Matt: Videos are great fun to film. It’s just messing around all day! “Nothing to Lose” was especially fun as we filled the room with all our friends and started drinking early. By the end of the day everyone was looking a little worse for where.
.

The Meister: I noticed someone on Facebook asking where to get the CD after seeing you perform at a KISS/Crue show.  I recommended Amazon to them as that’s where I got my copy, is that the best place?

Matt: Yeah I believe so. Or there is always i-Tunes. The best place to get one is at a show, though!
.

The Meister: What are your thoughts on the digital age of music with downloading and releasing an album now?  Do you think that hard copy and liner notes will become a thing of the past?

Matt: I hope not as you can’t beat getting a CD and looking through the cover at all the artwork and so on. It’s nice to have the music in your hands. But we will see. The music business is a funny thing and you can never predict what will happen.
.

The Meister: When I get home from work I like to open a beer and put on my favourite CD to unwind.  Do you guys ever listen to your own CD?

Matt: Occasionally if I have my iPod on shuffle a song of our will pop up and I listen to it. I have no problem listening to our tunes. It’s good as you can go “well that’s great, but I want to do this next time” it’s always good to critic yourself.
.

The Meister: So, what’s the future hold for The Treatment after this tour?  Is it back home or more touring?  Are there any plans or material written for a new album?

Matt: We go home and have a tour with Thin Lizzy in November/December in the UK. we will rest up and work on new songs in the time off. We actually have a few songs ready for the next album so we will be building on that.
.

I look forward to getting the treatment September 13thin Toronto!!  Fellow Decibel Geek, Wallygator and I will be attending the performance and will tell you all about The Tour 2012: KISS and Motley Crue featuring The Treatment next week, stay tuned!

Shake the Mountain!
The Meister