I'm on the Night Train – Ready to Crash and Burn! 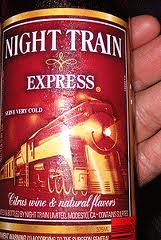 I first heard of Night Train while listening to the first Guns N Roses album. Axl sings his ode of amore to the liqour beverage. At that time I wasn’t old enough to buy Night Train, let alone know what it did to the adverage man.

In 1992 I was a freshman at UNC (University of Northern Colorado) in Greeley, Colorado. Not much went on at that time in Greeley. On Wednesdays you didn’t go outside because that was the day they took the cows from the fields to the slaughter house. Yes, Greeley was SMALL.
Wednesdays were also party nites at the school. Classes ended at 3, the parties and the debauchery started at 6pm (gotta eat dinner).  On this night, my friends and I had decided to stay in and drink. So we placed a call to one of my friends who made regular alcohol runs for us. We didn’t have much money between the four of us. Altogether we had less than $25. By today’s prices, that’s nothing, but back then, we could rule the liquor kingdom. Night Train at that time was the drink of choice for all the college kids. 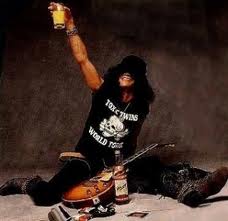 Now, we got maybe like 6 bottles of this stuff, and like four bottles of the Boones Farm (strawberry passion) and some orange juice, cuz everything goes with orange juice.  I think that night it was snowing, so of course the heat was crankin, and the music was playin. We cracked open the Boones first. Since Ive drank it millions of times before, it was just like drinking kool aide in the summer. The strawberry flavored wine was like a cool frozen treat. I looked at the bottle of Night Train, and it called me. Since Axl Rose was one of my favorite singers I thought it would be fitting to tap the bottle and crack it open. I take a swig, and its not pretty. It burned my throat and it had a wine smell to it. So I mixed it with orange juice, yum. Again, in my defence I was young and my stomach didn’t know any bounds.

I continued to drink and I continued to think I was QUEEN B!! Strange thing happens when you drink, you think you can take on the world and you think that everybody is against you. In the song, Axl sings about how while drinking the Night Train he’s a ‘West Coast Struttin’ bad MF. And I felt the same way.

Now from here the story is here say, because it was told to me by my roommates and others. So, as I’m drinking and getting crazier I start basically being that typical drunk girl. I’m dancing to whatever is playing on the radio, and whatever I can find to play.  As with anyone that has no experience in drinking, you get that period of euphoric happiness, the off beat dancing and singing like your life depends on it. Yes, that was me. I was channeling the spirit and dance moves of one Axl Rose, calling everyone a bitch, and telling random strangers I loved them. From there I’m told that I also cursed out our D.A. (dorm adviser) and also preceded to try and talk to some football player. I was told that I called a few exes and told them they were assholes. Oh and I called my ex roommate and told her it was me that told her boyfriend that she was sleeping around on him…yes, Night Train will make you do somethings that you can’t do sober. For me, it was a wild and somewhat crazy night. 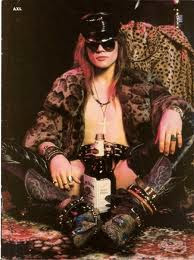 No, I didn’t knock over a liquor store, drive drunk or even get into a fistfight that night. But I can say this. Night Train, is not what the song makes it out to be.  The stuff tastes awful, and its cheap…DAMN CHEAP! I didn’t feel like a Rockstar that night and I damn sure didn’t feel sexy the next morning. In total, we each drank 2 bottles(one Boones Farm, one Night Tain). My head felt like it was being jumped on by a group of small toddlers. My mouth felt like I had licked the asphalt all night long, and then ate rocks. As my roommates counted everything that happened, I could only think that this cant get any worse. But it would.

If you want a quick high, Night Train is the drink for you. But if you want a good time and still remember everything that happens in the process, just listen to the song by Guns n Roses.
Moral of the story: NOT ALL CHEAP BOOZE IS GOOD BOOZE