IRIS DIVINE – The Static And The Noise (Album Review)

“There is no justice…a court of lies“, so begins this fantastic release from the super talented three piece Iris Divine.  So, let the Decibel Geek Court take a look at the facts and reach its verdict – guilty!  Yes, guilty of producing an amazing chronicle of modern life through the prism of progressive metal.

All the relevant musical evidence points to an electrifying mix of aggression, progression and possession.  The songs eat into your soul and take you to worlds beyond the here and now.

Formed some ten years ago, this three piece hails from Virginia and they forge a mixture of thrashy metal with the pop sensibilities of Nirvana and the progressive tendancies of Rush or Dream Theater.

Zink Hossain of the sublime Shumaun used to play guitar with these guys, but unfortunately left in 2012 – the good news is that one great band became two.  Now the band consists of Navid Rashid (Vocals, Guitar), Brian Dobbs (Bass) and Kris Combs (Drums, Keys/Programming).

The record gives spirituality and brutality equal billing.  They smash open the musical melee with the brutal riffing of “Catalyst“, which sounds like an out of control train, straining at the tracks.  The drums drive the opener, with Rashid‘s strong vocals telling stories of injustice and pain.

Coombs recently stated that the band’s lyrics were largely about “personal conflict and/or relationships” and you feel that through songs such as “Like Glass” and “The Acolyte“.

The record is very dense, yet completely compelling with its haunting melodies and complex riffing.  You can hear influences of thoughful bands such as Rush, but you can also hear more metallic elements (it was no surprise to find videos of them covering Metallica‘s “Battery“).

The strongest songs for me are the title track, “Like Glass” (with its Chilli Peppers‘ groove) and “The Acolyte“.  However, the whole affair is pure class and I truly love Navid‘s vocals, with the guts and glory and soul.  This band are amazing and so very intelligent.  I rate this as one of my favorites of the year to date and am looking forward to Shumaun‘s sophomore effort too!  Get something Divine as soon as you can!

Buy: The Static And The Noise 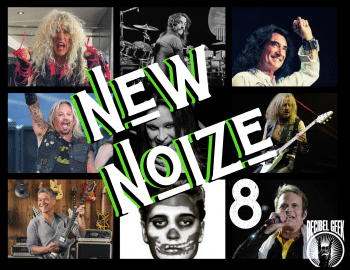 We return this week to discuss all the latest happenings in the rock world with New Noize 8! The past couple weeks

With 2019 now in the rear view mirror, we’re back this week to share our Album Anticipation for 2020. Several great artists