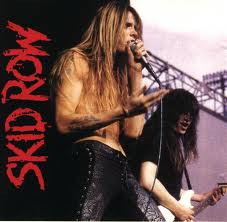 Ahhhh 1991, I was 21 years old and although we were starting to hear music from the incoming “gunge” tsunami, heavy metal was still ruling the world with some major releases and big tours that were rocking through North America and the world.

One such tour rolled into Toronto in June of 1991, was about as big and bloated as the genre got. Guns and Roses had gone out in support of the “Use Your Illusion” records. The fact that neither album was ready and wouldn’t be for another three months when the tour got underway didn’t deter the biggest band on the planet. After all they were Guns and F’n Roses!

Along for the ride was Skid Row who had released the metal masterpiece “Slave to the Grind” album. This was going to be one bad ass metal feast for the ears. Definitely the biggest show of the year. 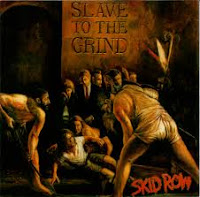 Skid Row hit the stage like they were shot from a cannon. This band exuded an intense energy that I haven’t witnessed many bands match. They truly lived the moniker “Youth Gone Wild”. Fact is they were on top of the world, “Slave to the Grind” was faster, meaner and more intense than their debut album. No easy feat and it debuted at number one on the Billboard 200 charts.

Skid Row worked the crowd into a frenzy. Sebastian Bach is a ball of explosive energy and was blessed with a set of metal pipes that puts him in the league of Halford and Dio in the sheer talent category. The band left everything they had on the stage, a stronger opening band I can’t recall. (possibly LA Guns opening for ACDC but that’s another story) “Slave to the Grind” is a must have album for any self respecting metalhead, and my pick for best metal album of 1991. 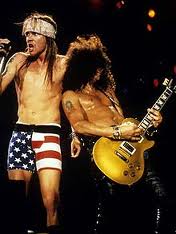 Now remember Guns and Roses had become the biggest band in the world. Appetite for Destruction had propelled them into the stratosphere. Lies was just a little ear candy to hold us over as they prepared what was going to be 2 albums released on the same day. The buzz on Use Your Illusion was off the hook. People were so anxious and excited to hear more from the street urchins turned “Kings of the World”.

So very early in the tour they pulled into Toronto’s CNE stadium to rock a full house of metal maniacs. Now I do remember a longer than normal wait between sets but it wasn’t horrible. I don’t recall what time the Gunners hit the stage but this was before Axl’s time schedule and inability to arrive on time became a bigger story than the shows themselves.

So Guns and Roses arrived and played a solid and long set. Clocking in at over two hours they put on a good show. From an energy level it was a little strange because the crowd would go from rocking their asses off to the “Appetite” material and then be brought down a bit with the unfamiliar new songs. This early in the tour, they had not yet grown into the full bloated beast with backup singers, horn sections, etc. that they would add when they passed by the following year with Metallica.

Funny story, a few months before the show I had found a fairly rare bootleg of Guns and Roses entitled “No Refrain”. On this CD was a per Illusion version of November Rain. So my buddies and I knew this track inside and out before the concert. When they brought out the piano for the “live” version, my crew were singing along with the still unknown tune. After the song ended the people in front of us turned around asking “how did we know those lyrics?” Ahhhh yes I was even a decibel geek back in 91. 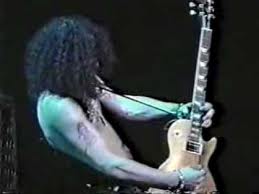 Slash’s solo that night was way way way too long. Now I love Slash love his guitar work, but I have never been a fan of solos period. The exceptions are musicians that make the solo a visual treat (Tommy Lee for example) instead of just a musician’s wank. So Slash noodling on and on for over 25 minutes was to me, just a tad boring. With the exception of the snippit of the Godfather theme all I could think was “I wish they would get on with more songs”.

I was glad I got to see Guns and Roses at time when they were still a band, but on this night I have to give it up to SKID ROW as, in my opinion they upstaged the headliners that night. Come to think of it, Metallica would do the same the following year in the same building.