I love being a KISS fan! That’s really the point here, quite honestly there really isn’t much use in reading any further. I love KISS, always have, always will. From the moment I walked into my cousin’s room and laid eyes on the ultra-cool KISS poster above his bed, I was mesmerized. I would spend hours looking at his KISS trading card collection while I listened to Dressed to Kill and Destroyer over and over again on my orange Fisher Price record player. They were larger than life super heroes that played guitars and to my impressionable six year old mind, there was nothing cooler. The makeup and image grabbed me by the imagination, it was truly genius.

Throughout my teenage years KISS remained strong and true. The fact that they washed off the face paint and continued on with other members was really of no consequence to me. They were still putting out great albums, still putting out great live shows and they were still KISS. I supported every genre and member and welcomed them to the family and truly there isn’t a KISS record I dislike. 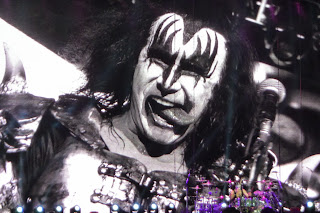 As an adult, I am able to remove myself from the situation and look at things from other perspectives. I understand to some KISS is contrived and calculated and that goes against the true “artist” mindset. I understand that KISS is a business as much as it’s a band. That said, I remember an interview picture disk I had back in the day where Gene and Paul said “if you take away all the extras, the bombs and the fire and the costumes and the like than what you are left with is songs” and they are right. I am the first to admit that it was the makeup that grabbed me, it was the image that drew me in, but, it was the music that kept me a KISS fan for the years that followed.

What has always annoyed people about KISS is their honesty about this business. Suffering for their “Art” was never part of their plan and using makeup and effects was dismissed as gimmicky and even silly. The music they create is meat and potatoes rock n roll, this is not a five star dining experience, it’s a Big Mac with large fries but you know what? McDonald’s has done alright with that recipe. I laugh when I hear people denouncing their music as basic pop rock songs, that’s exactly what they were going for and to be honest it’s also what the Beatles (insert collective gasp) were going for when they got together too. Don’t get me wrong I am not trying to compare KISS to the Beatles, but on second thought, yeah I am! Beyond the surface they are both simply successful rock and roll bands whose music made some people very happy and infuriated others. 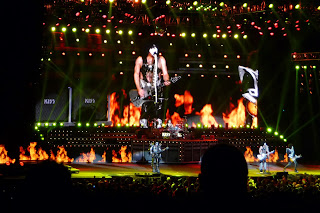 Let’s be honest here, the lyrics for “I Wanna Hold Your Hand” was just as much about “gettin” with the opposite sex as the more blatant “Uh! All Night” just a different era people. The Cleaver parents slept in single beds yet Wally and Theodore were still conceived and “Gee Ward, you were kinda rough on the Beaver last night” was still the most erotic thing spoken in TV at the time, but I digress. No pop song has ever or will ever change the world, it’s entertainment people. Maybe to be taken seriously KISS should have broken up the day Peter Criss left the band, personally I disagree. Anyone remember Peter Best?

A number of years ago the topic of KISS 2.0 came up. A possibility of KISS continuing on without Gene and Paul in the band and at first I laughed but then I stopped and though about it. From a business “lets keep the paychecks coming in for Paul and Gene” standpoint I certainly wouldn’t be surprised if something like this were to happen. 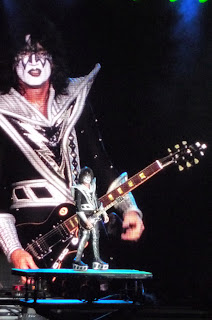 This of course brings us to the now, and I must apprehensively open the nasty can of worms that plagues Kiss fans today. The whole Tommy Thayer/Eric Singer “FAKE” Ace/Peter war that continues to polarize Kiss fans. I would have loved the original lineup riding into the sunset together, but it didn’t happen that way for a million reasons. I don’t want to get into this battle again, from what I understand, the fact is Peter sold his makeup design back to KISS and Ace has licensed his back to KISS. So Paul and Gene are calling the shots, if it wasn’t Eric and Tommy it would be someone else and I do feel Eric and Tommy bring great energy to the band.

This dilemma of separating the player from the character or should I say not being able to separate the is really quite amusing to me. Ace Frehley is the guitar player in KISS, Ace Frehley is also the “Spaceman” from the planet Jendell. Kiss is the only band that has created such a thing and it’s only because of the makeup that we are talking about this. I have made this analogy before but nobody has ever accused Ronnie Wood about being the “FAKE” Brian Jones, its simply because Tommy has been given Ace’s character that has everyone in an uproar. 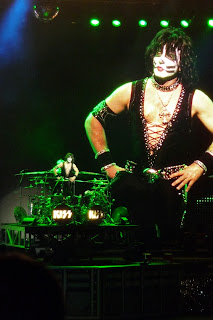 If that’s what it takes to still have KISS around than I for one am going to accept and enjoy it for what it is. If Journey tours through my town and I catch the show I wont be there to slag Arnel Pineda as the “fake” Steve Perry, I am going to enjoy the music and the show that they can still deliver with Arnell at the helm. Recently I was lucky enough to see Quiet Riot and they put on an amazing show. Honestly, in the year 2013 to have these bands still around and making music is a blessing and I will continue to support and enjoy the music they created because I love it, its that simple.

So on to KISS 2.0, when I first heard the idea it sounded ridiculous, who would pay for that? Paul and Gene kept the band alive but, the uniqueness of this band opens up the possibility. Like no other band, the makeup and characters they have created would allow for “others” to jump in and deliver a worthy s
pectacle. How this would be delivered to the fans is the real question. I do not see it as a recording, touring entity as Kiss exists now but there are certainly ways in which a KISS 2.0 could be marketed successfully. Maybe a Broadway type of experience? It certainly worked for Rock of Ages and Tommy and it would be a way to keep the music alive.

I love being a KISS fan and all that it entails, through all the eras and styles and twists and turns, I am all in. Their music has always been a positive influence for me and their live shows have always been amazing to behold. If it comes down to a KISS 2.0 vs. a world without KISS, I am probably going to check out KISS 2.0 and enjoy the music probably while eating a Big Mac and large fries 🙂