Maiden and Mayhem in Montreal 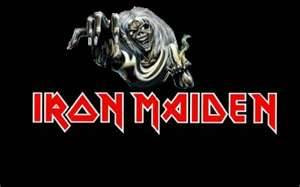 With this past episode of The Decibel Geek podcast being a radio sucks episode in which the boys featured Iron Maiden’s Can I Play with Madness I thought I would take this opportunity to post a rather late concert review on one of my all-time favourite bands Iron Maiden. 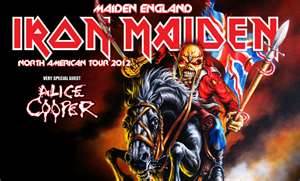 As tragic as it is I must confess that I have only had the opportunity to see Iron Maiden once previous to this summer’s Maiden England Tour featuring special guest Alice Cooper and that was for the Brave New World Tour, which marked Bruce Dickinson’s return to the band way back in 2000.  My “Maiden Buddy” and I were determined to catch this tour after missing their shows for so long.  “Can I Play with Madness” is rather fitting as a theme for our concert adventure as instead of seeing them in , for some unknown reason we formulated a plan to travel to to catch the Number of the Beast.  I guess we figured what the hell, might as well go all out as we’ve missed so many shows!  We booked a hotel on line and opted to take the train, thinking that we could ride in comfort and begin the overwhelming consumption of frosty adult beverages at an early hour.  Apparently, the rail company was not on the same page as us, as there was no “bar car” and the attendant pushed a beverage cart up the aisle around 10am, telling us that we could not get a beer until the bar serving time of 11am……and then she disappeared and we didn’t see her again until the last half hour of the ride!!  And then she would only serve us two each….lesson learned about 5 hours of train travel and the availability of beer, oh well, lots of drinking to come.  The hotel was just a short walk away from the central train station past the Bell Centre, home of the Montreal Canadiens and venue for the mayhem of tonight’s show.  We found it easily and had a rapid fire check-in, basically opening the room door and tossing our gear inside, we hit the streets in search of the frosty adult beverages that we were so very, very far behind on.  I was sporting my “a little bit” snug Brave New World shirt, my buddy was in his “Eddie” football (soccer) jersey and we were not alone.  Maiden shirts were everywhere on the streets and it was an electric atmosphere, with people stopping us and others to chat about their choice of shirt and it’s origin, and in some cases showing offstunning “Eddie” tattoos.  I was surprised to run into a couple of guys that have travelled from Nova Scotia as this is the closest place that they can see major bands, and I thought we’d come a long way!!  What a great rock and roll party atmosphere and buzz for the show, something that we don’t get at most shows.  Everyone was friendly and in great spirits as we walked around the downtown core, often opting to sample the sights from a couple of sunny patios.

We headed down to The Bell Centre (a thrill for me being a Montreal Canadiens fan) and joined the milling throng entering the building after posing for some candid photos with statues of hockey legends outside the Arena like Guy Lafleur.  Alice Cooper was just coming on as we lined up to purchase more rather overpriced, but oh so sweet “Nectar of the Gods”, beer and took our seats.  started out with The Black Widowfrom his iconic record Welcome to My Nightmare and then moved into the less well-known title track from Brutal Planet, all of which sounded great as we impatiently waited in the beer line.  I noticed several Cooper shirts around my nosebleed seating area of high and to the left of the stage.  We hit the seats in time for I’m Eighteen and the crowd was lapping up every minute of Cooper’s set, I mean that’s a helluva opening band right there!!  With a large yellow snake around his neck, No More Mr Nice Guy (I still prefer the Megadeth version, just punchier, sorry ) and then Hey Stoopid led us into the guitar solo.  The guitarist was a rather attractive blond girl who’s chops sounded as good as she looked!  Billion Dollar Babies came next before the Wayne’s World soundtrack tune of Feed My Frankenstein and although Tia Carrere was not on stage with , his new guitarist was a fine substitution in my eyes. A huge “Frankenstein” came out on stage during the tune; I guess spared no expense on this tour even though he was the opener.  Waving his trademark riding crop through the air, Poison delighted the crowd next and then into another cut from the Brutal Planet CD, Wicked Young Man.  That’s two tracks off that twelve year old disc now that is certainly not his most popular work, but a very fine recording effort indeed, wonder why is he promoting that one so hard?  In true fashion the guillotine was rolled out next and he cut off his own head for I Love the Dead.  He closed out his way too short 40 minute set with the anthem heard across the world every June, School’s Out and sporting a Montreal Canadiens hockey jersey. Wonder if he’ll wear The Leafs in in two days. An Alice Cooper show is certainly an entertaining event and I loved it all the way.

Seventh Son of a Seventh Sonwas the first real album that I had listened to and purchased from Iron Maiden, yes I know a
bit late to the party.  It’s not my favorite CD, but indeed the one that started me rolling and it all began with the single Can I Play with Madness.  After an into of Doctor, Doctor, a classic UFO cut, I was thrilled as the opening track was Moonchild and then blistering through into Can I Play with Madness.  The “We want information” intro announced that The Prisoner would be the next treat and then Two Minutes to Midnight from Powerslave, an album which is considered to be a true heavy metal achievement.  It was nice to hear Afraid to Shoot Strangers as it is a rarely played song before lead vocalist Bruce Dickinson came out adorned in the red coat uniform jacket and waving the Union Jack for The Trooper.  The classic Number of the Beast is a great song and has to be heard live to really be appreciated and the crowd was singing along the whole way.   Phantom of the Opera was next and then Run to the Hills, during which a huge “Eddie” appeared, dressed like General Custer.  I was treated to one of my personal favorite Iron Maiden tunes next in The Wasted Years.  Seventh Son of a Seventh Son, The Clairvoyant and Fear of the Dark all preceded the standard show closer of Iron Maiden.  After a brief break the boys treated the fans to a killer encore set of three songs consisting of Aces High, The Evil That Men Do and Running Free.  They encompassed something from almost every CD, sticking to the older ones which are by far the best recordings of this pioneering NWOBHM band………. and for those keeping track, that’s five tunes (half the album) from the Seventh Son of a Seventh Son album.  I would have liked to hear more from the Piece Of Mind CD, but with a setlist like that and such a big repertoire of great tracks to choose from, you can’t really complain.

We filed out after the show and hit the streets. If you’ve never been to (and this was my first time), the dowtown core in an excellent party area with different bars and clubs lining both sides of the streets in the three block radius.  With Maiden shirts surrounding us (and now both sporting a new shirt with eddie riding a moose in front of the CN Tower and waving the Canadian flag) we proceeded to party on into the wee hours of the morning! What an awesome show experience through and through, proving that Maiden can still rock all the way. 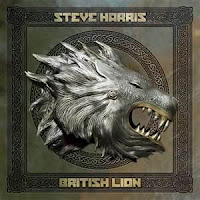 Iron Maiden bassist and founding member, Steve Harris just released a solo effort entitled British Lion and while it is not Iron Maiden, he puts forth a creative and well composed disc of solid rock tunes. A recommended purchase for any fan.