Meister Has Hell to Pay: A Stryper Album Review

November 1st in North America was the release date for the latest offering, No More Hell To Pay, from the biggest, most widely know Christian Hard Rock/Heavy Metal band in the world, Stryper.

There are facets of the rock community that can’t get into Stryper, citing the messages in their lyrics as the main reason or that they don’t like to be preached at.  As a big fan of other Christian Rock bands in my younger days, it wasn’t the messages or lyrics that shied me away, but I always thought Michael Sweet’s vocals were way too high and screechy for my personal tastes.

Thus forth they were not high on my “hit-list” when I embarked on the first Monsters of Rock Cruise in 2012 and I was not at all disappointed when they were snowed in with Lynch Mob and were late to join the ship, missing their originally slotted performance.  Fast forward to last year’s Monsters of Rock cruise where again Stryper was booked to play.  I had been sampling some of their back catalogue in order to familiarise myself with their music and found myself rather enjoying it.  Why had I not liked it previously, I don’t quite know, but his vocals do take some getting used to for sure.  I was able to catch a couple of songs from their set aboard ship and even though I was terribly intoxicated at the time and I don’t mean by their performance, I was genuinely impressed by guitarist Oz Fox and the general tightness the whole band exuded.  I made a point to keep going on my path of Stryper discovery, well as far as the music is concerned at least!  In July 2013 they were set to appear for a show at Toronto’s premier rock club, The Rockpile in Toronto.  I decided to take in the event and was suitably impressed, catching myself singing along and smiling all the way.  Read my review of the show here: “Yellow & Black Attack At The Rockpile”.  Michael’s vocals have mellowed a little with age, but not that much, I guess I’m just more open to them now, they have certainly taken a long time to grow on me, but now I’m banging the Stryper drum all the way to the church (so to speak)!

Stryper was formed in 1983 in Orange County California and while attracting several bouts of controversy from various groups over the years have unleashed eleven studio albums to date including the latest, No More Hell To Pay.  Stryper consists of vocalist/guitarist/composer Michael Sweet, his brother Robert Sweet on drums, Oz Fox on lead guitar and Tim Gaines on bass. 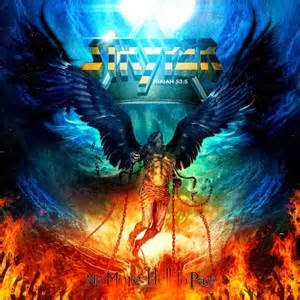 I was looking forward to hearing the new Stryper album, No More Hell To Pay, but also apprehensive, wondering if they could live up to the quality of their youth and the music that I now hold in high regard.  Well, I’m happy to report that Stryper fully exceeds any and all expectations with No More Hell To Pay, containing some of their heaviest music to date.  Beginning with “Revelation”, featuring harmony vocals, but Sweet’s higher octave register dominates fitting well here against that backdrop.  The song is a complete test to their 80’s work that I’ve recently become increasingly rabid for…….perhaps you could say that I’ve had a revelation…..Stryper is one awesome band!  The title track, “No More Hell To Pay” sits in the number two slot and features some blistering guitar work courtesy of Mr. Oz Fox.  Opening with a lightning fast pace the third offering, “Saved By Love” finds Michael’s voice in a lower register/tone and is a definite stand out.  Three songs in, No More Hell To Pay has me hooked and you just know that it’s gonna get even better from here!  My suspicions and hopes ring true immediately as next up we have a cover version of the song “Jesus is Just Alright” originally performed by The Art Reynolds Singers in 1966.  While Stryper has often performed some excellent cover versions (an entire album of, 2011’s The Covering) of classic rock songs and some of their biggest rock influences, they make this one extra special somehow and couldn’t have chosen a more fitting song to cover here.  “The One”, while sounding similar to their 80’s offerings, is a little lacking in punch and a bit boring to be quite honest, but maybe that’s just in comparison to the former track.  Then, like they’ve been injected with high test octane, the album really ramps up with “The Legacy” where some great riffs and growly vocals drive the chorus.  The thundering and almost larger than life “Marching Into Battle” could well be the heaviest composition that we’ve ever heard from Stryper and I’d already had a preview to this when they played the track at the aforementioned Toronto show at The Rockpile (“Marching Into Battle” at the Rockpile).  “Te Amo” (Spanish for “I love you”) features some great harmony vocals entwined with some more guitar showcasing.  Probably my favourite track here is “Sticks and Stones”, again exhibiting a message directly to me in the lyrics as I have certainly endured some heavy teasing in my childhood.  Correction…..I’ve now heard the track following “Sticks and Stones”, “Water Into Wine” and it is clearly my new favourite!  A completely rockin’ track from start to finish, totally worth the price of admission alone and I can’t get enough of this song.  “Sympathy” follows the suit set at the outset of the record and “Renewed” closes out the collection………Stryper are definitely renewed, pick this album up, you won’t regret it!