Well as I’m somewhat of a world traveller it’s only fitting that I would discover music and bands from across the world.  It’s really a shame that I was unaware of W.A.N.T.E.D when I travelled to Greece a couple of years ago, I would have for sure sought out a live show!

It was “all Greek to me” as the saying goes, but I cued up the music and started scouring the internet for information on this hard rock band with influences such as Guns n’ Roses, Whitesnake, Buckcherry and more.

W.A.N.T.E.D formed in Thessaloniki, Greece in 2001 comprised of Dean Mess (vocals), Strutter (bass), Jima (guitar), Angel (keyboards) and Constantine Matis (drums), they unleashed an EP called Shit Happens in 2003 and their début offering, Neon Nights, four years later in 2007.  2011 saw them release the single “Matter of Fact” from the forthcoming album, but it would take until 2013 before that album hit the stores.  Meat n’ Greed, the second full-length record finally came out in the fall of 2013 and last week found it’s way into my collection.  Having set the stage for the likes of Steven Adler, Paul Di’anno, Dokken, Bonfire, Firewind, White Lion and Whitesnake, W.A.N.T.E.D. have developed a following derived from their “remarkable shows”. 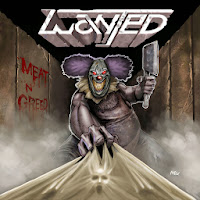 Meat n’ Greed explodes with a track titled “No Space Town”, a hard rockin’ song that sets the tone for what is to come.  We get “Your Life Your Game” next and it’s even better than the opener with it’s grinding guitar riff.  “Unbelievable Mess” features a really catchy, hooky kind of chorus and lyrics while “Mr. Wise Guy” begins weirdly with amusement park sounds…..I think, before it opens out into a brooding, but none-the-less-catchy slower pace track.  In a quick study of the cover artwork, we see some sort of killer clown? Or is it a mouse? With a cleaver pulling a sheet over a human face……rather cool actually.  “Last Calling” delivers an up beat, charging song after it explodes away from the foreign language intro.  A rousing little number, contrary to the title with “Misery Loves Company” takes us through into “Myself Again”.  “Mamma Miss Hell” could well be the standout track here if it’s possible to choose, but on the first few listens, not having the track

listing directly in front of me, I could’ve sworn Dean Mess was saying “My, My Michelle”.  We find “No Way We Stop” up next and I sincerely hope that’s a mantra for this band. In 2011,  W.A.N.T.E.D released a video single for the fans of the “Matter of Fact” song as a prelude or teaser to the forthcoming album which did not see the light of day until 2013.  The longest track of the collection was a fitting choice for the video treatment and is definitely another highlight.  “Shot” closes the recording, another brooding piece that effectively ramps down the high energy and displays the versatility of W.A.N.T.E.D to be more than just a band of sleaze rockers.  Great job guys……now it’s off to search out the début Neon Nights album!