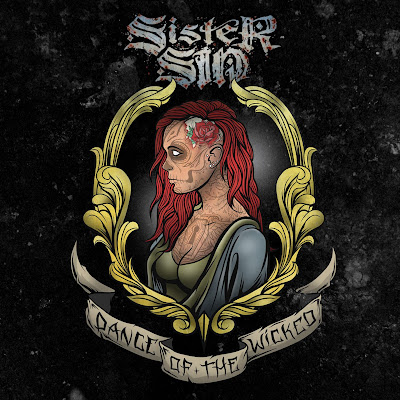 Way too late in joining this party I discovered Sister Sin only late last year when I checked out some you-tube videos of their stuff, trying to get a feel for them as they were slated as the middle band in a trio of female fronted rock acts for Doro’s North American tour including a stop in Toronto in February.  Those couple of you-tube videos led me to purchase the Switchblade Serenades CD and shortly afterwards True Sound of The Underground.  I was sucked in by the aggressive flavour of the music, the riff-laden tracks and sing along choruses, feeling the hunger that this band had.  Front woman Liv Jagrell’s haunting, throaty vocal styling seethed venom and attitude that was hypnotising, bringing the music to life.  Unable to satisfy my voracious appetite for their music, I impatiently ticked the days off my calendar until their third CD, Now & Forever, was released.  I had the opportunity to interview Liv via email as I reviewed the Now & Forever album (Now & Forever/Liv Jagrell Interview) and then again, meeting her in person at the Toronto show (Toronto Show Review/Liv Interview). 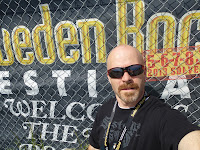 Just a few weeks ago I had the opportunity to leave my Canadian homeland for a whirlwind trip to Sister Sin’s homeland of Sweden and attend the four day festival Sweden Rock Festival 2013.  Watching them perform there in their home country was simply magical that day and they all really brought it to the show, playing hard with fury, passion and anger, one of the best sets I’ve ever seen (and I’ve seen a lot!) (Sweden Rock First Day (Sister Sin Review).  The good folks over at Victory Records had provided me with an advance copy of Dance of the Wicked, originally released independently in 2003, some time ago and it served to be a soundtrack for my journey, only just now days after it’s release have I had the time to sit down and note my thoughts.  I had hoped to meet up with Liv and the band in Sweden or even a phone interview afterwards to include here with my thoughts on Dance of The Wicked, but I just haven’t had the time to put it together, so hopefully we can get to that in the near future.  Right now Sister Sin is busy with summer festivals throughout Scandinavia and Europe 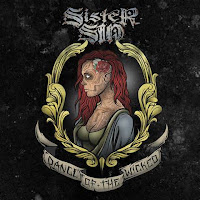 Opening up sounding like someone is tuning in a radio station to a live performance and then opening out into the beginnings of another song rich with the distinctive Sister Sin sound I’ve come to love.  The inclusion of cowbells are a nice touch on Dave Sundberg’s part as the anthem chorus of Kiss The Sky will have you singing along.  The Swagger of the title track, Dance of the Wicked oozes from the speakers for the next cut followed by Fall Into My Dreams.  The latter is one of my favourite tracks on this record with it’s tempo and melodies and I ask you: what guy wouldn’t want to fall into front woman Liv Jagrell’s dreams, named one of the hottest women in metal by Revolver Magazine?  The haunting, just over a minute long instrumental End of The Beginning appears next with Liv showing her vocal prowess on the melodic slower Love Lies after that.  That brings us to the perhaps oddly titled Dirty Damn 1 and I can’t quite make out the lyrics to the chorus, but is a fast paced rocker with the punk influences showing through.  Often when a band does a cover of another artists song they stick to the original as close as possible, but that’s not the case here.  Liv leads her

boys through their version of The Rolling Stones classic Paint It Black in which they really make it their own.  Trag
edy Loves Company has a kind of lighter contemporary flavour and feel to it and is another catchy composition.  The demo, Minor You (Major Me), could easily have been included on their latest release, Now & Forever, perfectly matching the feel of that album.  Writings On The Wall, another demo rocks fast and hard, another stand out cut in this old school metal assault.   Head Over Heels (demo) is trademark Sister Sin, jam packed with riffs and the piss and vinegar attitude.  The last selection on the CD is their Motorhead cover of Rock ‘N Roll featuring Doro Pesch.  This track was originally released in 2011 for download only and has a great video to match (Rock ‘N Roll Video)

This may be re-masters of their earlier work and while you can hear the progression of the song writing and the maturity that has obviously set in with later works, this is still a rockin’ album start to finish and fits well into the Sister Sin repertoire.  Pick it up at I-tunes or Amazon or through Victory Records (Victory Records/Sister Sin) and do us all a favour and crank up the volume when you listen to it…this CD as do the other Sin releases deserves to be listened to at an intensely high volume.

As the song from the Now & Forever CD says I am In It For Life and have been studying my “in progress” full sleeve tattoo (the line work is complete and colour starting soon) which is a guitar case that has travelled the world and has the stickers of band logos for my favourite bands on it, trying to figure out just where I can fit the Sister Sin logo in!