The Monsters of Rock Cruise 2014: Escape to Monster Island is fast approaching, but not fast enough for me and many of my fellow cruisers.  This year we set sail from the port of Miami from March 29 to April 2nd.  Co-workers are already reaching their breaking points as I mutter on all day 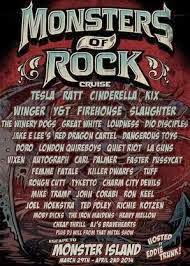 long about cruise related business.  I’m often met with blank stares as I arrive for the shift all excited about the latest band announced, development or travel plan I’ve concocted.  They’ve realised that the best way to shut me up is to allow me to don my headphones and play my playlist peppered with Monsters Of Rock Cruise artists, which also entertains them quite well as I have been known to randomly start air-drumming with whatever utensils are readily at hand during the cooking of that customers meal, I just have to remember that it’s not safe to use knives…lol.  The only thing on my Christmas list each year is to do with my upcoming voyage from the few albums of bands playing that I don’t already own to gift cards for new cruise wear or hotel vouchers for pre and post parties.  This year will be The Meister’s third experience with MORC as it’s become to be known but surely won’t be my last!
MORC has become so much more than a cruise, vacation or concert for me and many of the other cruisers…it’s developed into a community and in more than a few cases a family.  The initial Monsters of Rock Cruise set sail in 2012 from Fort Lauderdale, Florida and sailed to Key West, 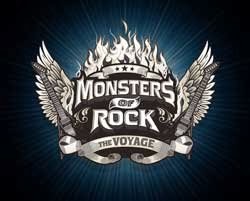 Nassau Bahamas and back during three days of pure rock and roll bliss from February 26th to 28th.  I was so excited leading up to the cruise, singing songs at work and making it a quest to purchase the discographies of every band aboard.  I left Toronto that night for the first cruise, so timid and shy, even though I had done a fair bit of solo travelling in the past, this was with goose bumps to see some of my rock heroes and my first venture on a cruise ship.  I met a few different folks on board the floating rock party during the first year and generally had an excellent time….it was everything that I’d hoped for!  To read about my adventures from the first year, here’s the first in my 2013 “Views of the Cruise” series of blog articles: (“Views of the Cruise #1-The 2012 Recap”).
I re-booked for the 2013 voyage and adventure before the first trip was even completed.  Now fully embracing my love of hard rock and heavy metal music that had been suppressed or lain dormant for so long, I started to travel to see some of these bands that just don’t come to Canada.  In the process I met other “MORC’ers”, so when it came around to 2013’s excursion my MORC family had grown exponentially.  From there it was like an explosion and I am proud to say that last year I added to that repertoire and now actually use my Facebook account for more than the friends you see every day or “that person from high school that you never talked to back then”’s friend requests.  Through MORC I have met folks from all over the USA, Brasil, The UK, Finland and even a surprising number right here in my own backyard in Toronto.  I no longer attend concerts here alone as there’s always a like-minded person, usually from MORC to enjoy a great show 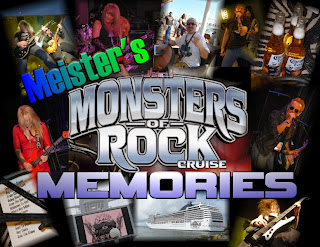 with.  Between the 2012 trip and the 2013 excursions I had been fortunate enough to become involved with The Decibel Geek Podcast as a writer for their website submitting concert/album reviews, interviews and commentaries.  I love discussing this music, introducing people to new bands and Decibel Geek was a great fit for me, so when it got close to the 2013 voyage I decided to start a series of articles called “Meister’s Views of the Cruise” about my beloved MORC vacation.  The series swelled to twenty volumes encompassing personal stories, interviews, band bios and generally anything and everything cruise related with the final instalment being me as a guest on the live podcast to recap my “top twenty” moments from the 2013 voyage.  Listen to the episode here: (“Episode #88-Meister’s Morc 2013 Memories”), just click the play arrow in the centre of the graphic at the top of the page to listen or download through I-Tunes.  I will include the links to the whole series at the bottom of this rambling. 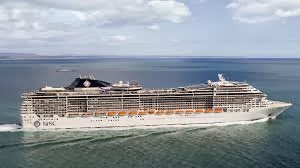 And now we get to the upcoming 2014 voyage.  This time the cruise has moved to a larger ship as it has totally sold out in the past two years and is nearly there again even with the additional approximately 1000 passenger spaces.  We depart from the port of Miami verses the port of Fort Lauderdale and our new vessel is christened the MSC Divina.  Here’s one of several You-Tube links for a tour of this floating beauty: (MSC DIVINA), I wonder how different that pool deck will look filled with 3500 long-haired, tattooed metalheads?  Part of the excitement is making all the plans and arrangements in anticipation of seeing old friends again and making new ones.  This time around I had the brilliant idea to contact everyone that I’d met and try to request that our rooms be close to each other during our booking process.  We chose deck 11, seeming to have the style of cabins that would suit everyone’s price point and requirements, to be our home after scouring deck plans of the Divina on line.  Everyone agreed that it would be a capital idea and I think in the end most of us did indeed end up on deck 11, but it doesn’t really matter as long as we’r
e all aboard.  In another of my brilliant ideas I collected a group of “MORC’ers” that I knew from the Toronto area in an attempt at a “countdown shot” with Ted Poley/Bang Tango/Enuff Z’nuff when their 80’s Invasion tour rolled into town 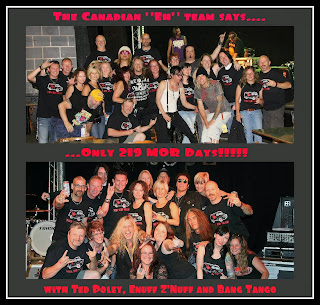 given as they were all MORC alumni.  A “countdown shot” is a photo from a cruiser, usually something creative or with a MORC band, to depict the number of days remaining until we set sail that year.  The group grew as people added other Torontonian Cruisers that they knew and I even had t-shirts made for our group.  The excitement was high between us all as we prepared for the countdown shot, some of us veterans and some first-timers to the cruise.  The veterans anxiously answering the questions from the virgins as the Facebook page became alight with chatter. (STORY OF THE COUNTDOWN PHOTO).  I began to find other Canadians from across the Great White North and our “EH Team” group has now surpassed forty “Canadian Cruisers”!!  My next plan is to attempt to gather us all (and more Canadians yet to be discovered) for a huge “Canuck Photo” aboard ship…..let’s see what happens……Hit me up on Facebook if you’re a “Canadian Cruiser” and want to join in!
In another exciting turn of events this year……prior to the 2013 cruise experience I had met, at Queensryche’s Toronto concert (“Views of the Cruise #11-Queensryche”), another cruiser from my area and we became friends meeting several times aboard ship during the voyage.  He was friends with another young lady who I met at that same Queensryche show and a couple of other times throughout the year.  She contacted me after she had seen a concert, wanting to do a review and subsequently became a writer for The Decibel Geek podcast as well….I’m very excited to announce that my fellow Decibel Geek, Kate Campbell will also be aboard the MSC Divina for her very first MORC experience this year!  Expect lots of drinking and general silliness as we bring you our adventures or better still visit the website (Monsters of Rock Cruise) and book yourself a cabin before they’re gone!

Thank-you Larry Morand and MORC for creating this absolutely amazing floating party and bringing us all together to make new friends and see the bands we love, I for one will be a part of MORC as long as I’m able…..at this point I’m not sure I even care if the ship ever leaves port!