Meister's Right to Rock With Keel 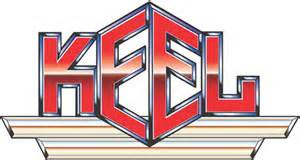 When I saw the track listing for Part One of 1985 year in review episode last week one of those songs sparked a huge cord in the ole’ Meister.  I immediately opened up my music file containing my over 3500 albums (all backed up on external harddrive of course) and clicked on The Right to Rock album.  By about halfway through the first track the memories were flooding in so thick that I had to swat them away as they buzzed around my head in a foggy haze.  Not the memories of 1985 because I have the memory of a fish and often can’t remember this morning, but these Keel memories concern the past two Monsters of Rock voyages.  I pulled out the hardcopy of The Right to Rock from the shelf and studied the 25th 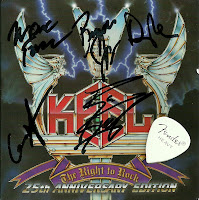 Anniversary edition’s autographed cover, only missing original bassist Kenny Chaisson having new (several years with Ron now) addition Geno Arce in place.  I had purchased this particular edition on the inaugural Monsters of Rock Cruise right after I saw them perform on the first night aboard ship.  Their first show in the small claustrophobic Pigalle lounge with the low ceiling and dark red color scheme on the the first night of the trip marked my first time ever seeing Keel live, even though I’ve been a fan since purchasing the Final Frontier cassette (based solely on seeing Gene Simmons name on the back) as a kid and from there collecting the rest of the catalog.  In fact it is Keel that I have to thank for being aboard the Monsters of Rock Cruise.  Being out of music for a time, I missed that they had released Streets of Rock & Roll in 2010, their first of new material in many years and the best they’ve ever recorded cover to cover in my ears.  When I found out, I went directly to RON KEEL to make the purchase and saw there on the home page an icon proclaiming “join us on the Monsters of Rock Cruise”….”click” and the rest as they say is history.  Being so enthralled (and absolutely without a doubt hammered) with that first Keel live experience, where I was right at the front of the stage, I saw vocalist and namesake Ron Keel sitting

in the lounge after the show.  In my excitement to talk to him and congratulate him and shower him with praise on a great show I approached, interrupting his conversation and mumbled and slurred my way through spitting out “best show on the boat tonight” as I totally embarrassed myself.  Keel’s second show of the voyage went much better, for me anyway.  They closed out the pool stage and after an eventful show in which Ron tripped over bassist Geno’s patch cord, tumbling to the stage, but seemingly not missing a note and special guests Oz Fox (Stryper), Brian Vollmer (Helix) and Jamie St. James (Black N’ Blue) joined the stage for a magical music moment during “The Right To Rock“.  Ron proclaimed that the band would all be over at the merch table to meet us all and thank us for keeping this genre of music alive.  I shook his hand and got a photo with him, thankfully he didn’t seem to remember the incident of two nights ago, at least he didn’t mention it anyway.

The second voyage in 2014 absolutely blew anything previous away totally.  I began to work on a full sleeve tattoo, 26 of my favorite bands logos depicted on the background of a guitar case and of course Keel was one of those logos.  Through a friend I was able to worm my way into attendance at their rehearsal session the day before we embarked for the trip.  If that wasn’t enough, I was told that we would be taking a limo out to the space, collecting a couple more fans/cruisers at their respective hotels along the way.  After a stop or two we rolled into the parking lot of the next hotel (a more ritzy one) and I saw the trio of gentlemen waiting out front with their long hair, ripped jeans, bandanna’s and guitar cases….holy shit

we were picking up Keel!!  Ron Keel, drummer Dwain Miller and bassist Geno Arce were some of the nicest guys and made us all feel comfortable during the limo ride out to Deerfield, regaling us with stories such as the bellhop at the hotel trying to get them to wait for the limo inside the lobby as they were scaring away customers and Ron’s “Geno book”.  It was literally our own personal concert during the rehearsal and for “Speed Demon” Ron came next to me with the microphone and we sang a line of the song together.  Wow!  Can it get any better than that?…..well, yes it can!  During “The Right to Rock” guitarist Bryan Jay called me up to sing with him for about 3/4 of the song!  The band loved my tattoo and Bryan Jay even took a photo of the Keel portion and asked me to send pictures when it’s completed fully.  What an awesome experience all around with an awesome band!  Long live Keel m/! 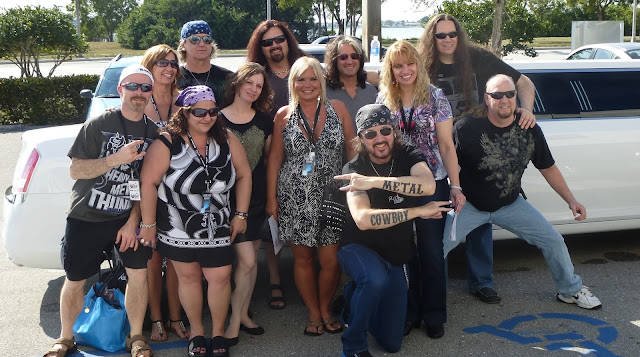 The ride back was filled with more stories, Ron and I even briefly talking about Toronto band Diemonds that he has played on The Streets of Rock & Roll Radio show and my conversation with Dwain.  You see Dwain and I had become Facebook friends awhile ago and in true stalker fashion I followed his updates as they crossed my news feed.  To be fair, we also had a loose arrangement to do an interview aboard ship.  I remembered that he had posted something like this as a status one day “I will be following Saxon around the boat like a stalker.” and I immediately thought to myself that he wasn’t the only one as I pictured me following Dwain as he followed Saxon like a conga line around the upper deck.  Well Dwain told me in the limo that Nigel Glockler, Saxon’s drummer was a hero of his and he wanted to meet him, that’s about when I opened up my big fat mouth and said something like “I know Nigel, maybe
I can set up a meeting”.  This

was not wholly untrue, but over exaggerated perhaps as Nigel and I had done an interview as a part of my before the cruise series of Decibel Geek articles.  I sent Nigel a message that evening and he said that he would be more than happy to meet Dwain.  Perfect!  After a couple of days of shipboard adventures I was finally able to make the introductions.  Nigel and I had run into each other earlier that evening and were now in the process of enjoying several drinks as Dwain happened upon us.  I made the introductions and the two drummers gave each other a big hug as I heard Dwain say “You make me want to practice”, what a cool moment, made even cooler as I looked over and saw that Ron Keel was interviewing Saxon lead singer Biff Byford for The Streets of Rock & Roll.

Both Keel shows aboard were magical and moving and I was front row for both.  I love this band and although Ron is announced in a solo gig aboard the upcoming 2014 voyage I wait with baited breath, wishing that Keel the full band will yet be announced as joining us again………if not maybe they’ll get to Toronto for a show at The Rockpile one day…..what do you say boys?