Hello folks, once again I’m back to ramble on about the Monsters of Rock: The Lost Weekend cruise and anything related to it!  Thank you for joining me, I’ve been looking forward to this voyage since I disembarked from last year’s tour.  Finally it’s here and here’s a quick recap of my first day of this aptly dubbed “Lost Week”.

I departed my home north of Toronto Canada on Tuesday around midnight and began my trek to the airport.  Arriving quite early, the evils of being at the mercy of the public transit system, I found a quiet section of the departures lounge and curled up to catch an hour or so of sleep.  By the time I awoke, snow was falling outside and the check-in counters were just opening up.  Our plane was delayed leaving by about an hour while they de-iced the wings, but the rest of the flight went by smoothly.  As dead tired as I was I still couldn’t sleep, just like a kid at Christmas I was so excited for the trip.

It was an amazing feeling to step out of the airport in Fort Lauderdale and feel the warm air hit you…….ahhhh, farewell snow, hello sun.  I missed my pre-arranged shuttle due to the flight delay, but a quick cab ride brought me to Fort Lauderdale Beach.  Throwing my gear into my hotel room located right on Fort Lauderdale Beach (The Merriweather Resort, which is a great place with excellent management I found), I wandered out to grab a burger and the first adult beverage of the trip.  During this half hour lunch on a patio overlooking the beach I also grabbed, much to my dismay, a little sun on the ole’ melon!  Not too bad, but best break out the chapeau and the sunscreen.  Wow, after only two beers, I was a little “buzzy”…..and I call my self Canadian….snap out of it Meister!  Must have been the sun.  I noticed that there was a ton of open real estate along the beach,  I thought that it was supposed to be packed down here for spring break, not that I care (being one who does not particularly like crowds, unless it’s in front of the stage), just surprised. 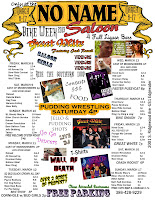 After lunch, I set out with some cruise friends on our ridiculous, but fun journey (3.5hrs) to Edgewater to catch Faster Pussycat at The No Name Saloon during Bike Week.  Check out the promo poster and see if you think a few of those events are “a little odd”.  I felt a little like I was in scene from Sons Of Anarchy as we walked up to the outdoor venue as it was absolutely littered with bikes out front.  I can’t say that I’ve ever seen that many bikes in one place, I don’t ride myself, but it was so cool to see!  We obtained some beverages from one of the many bars and I might add from a young lady wearing nothing but body paint above the waist!  Funny, I spent several minutes of hard studying of the artwork, but couldn’t tell you what it was, must have been distracted!  Unfortunately we had missed the first band on stage, Art, who I’m told are quite good.  Faster Pussycat came on for their rather early set at shortly after 8pm, opening with my absolute favorite Faster Pussycat song Jack The Bastard.  They rolled through their set including Cathouse, Slip Of The Tongue, Number One With A Bullet, Sex, Drugs, Rock & Roll, House of Pain, (during which Taime did his trademark sitting on the front of the stage for that song), Don’t Change That Song, Porn Star, Bathroom Wall (with Pretty Fucked Up featuring bassist Danny on vox in the middle), Shut Up & Fuck and closed out with Babylon.  After the show came more beverages (don’t get me wrong here, I’m not trying to imply that they had stopped at all during the show, ’cause that would be misinformation for sure!). 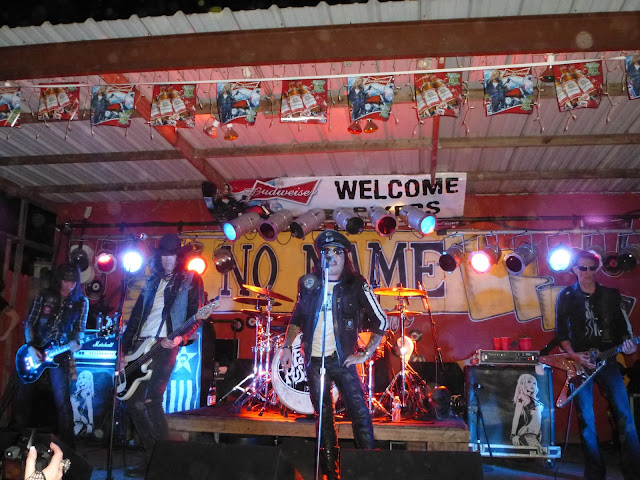 Today I’m just preparing to head out to the Rockerz Gone Wild Pool Party put on by one of our fellow cruisers and featuring bands Glitter Boys, Pretty Little Suicide, Liberty Lush, Bang Tango, Ted Poley and L.A. Guns……sounds like debauchery in the making, liver don’t fail me now!

Until tomorrow,
The Meister