Day two of my epic journey for the Monsters of Rock Cruise 2013 started out quite early around 8am.  We were all set to depart Edgewater and head back to Fort Lauderdale, when the search for a missing passport from one of the party held us up.  None the less it was a gorgeous sunny day and we eventually got on the road, arriving back in Fort Lauderdale in the afternoon.  Unfortunately the delay caused me to have to cancel my planned interview with guitarist Maz Mazza from Ted Poley.  Hopefully we will be able to reschedule soon. 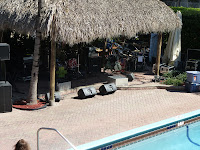 The Rockerz Gone Wild Pool Party began at 2pm, but things were just getting underway as I arrived around 4pm.  The Glitter Boys were first up to take the stage, or maybe I should say take the brick under the tiki hut!  The setting for the party was quite cool, although I immediately sensed danger with the pool being only a few feet from the stage.  With the stage being raised only about two inches above the ground and the grass roof of the tiki hut dangling down so low I knew that no matter where I was for the show I would not be able to see well, unless it was right up front.  I made some friends and chose a spot along the upper railing, settling in for The Glitter Boys.  The DJ announced them as having driven 14 hours in their “glitter bus” as they 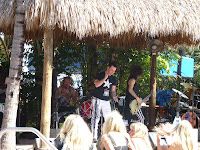 started into their set.  Surprisingly the sound was decent considering there were only a couple of P.A. speakers set up on either side of the tiki hut.  The drummer screams Van Halen fan with his clothing and his red and white drums.  As their set went on, the drummer did quite a bit of the talking in between songs and was actually quite funny overall.  Their all original songs have incited me to search out their recordings if there  even are any.  It was a fun set and perfect for this fun temporary venue, not a great set up for watching bands, but it sure was a fun set-up. 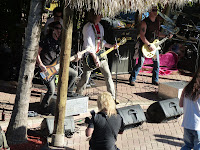 Next to hit the bricks was Pretty Little Suicide.  They sounded quite good as well, but by this time I had begun the consumption of frosty adult beverages and left my railing post, circulating the crowd and meeting many friends.  What I did notice as I floated through the crowd around the pool were the same two young girls that I had seen at Tora Tora’s 25th Anniversary in Memphis back in November.  The sisters at a guess are about ten years old and they study rock music.  One of them is a drummer and was standing behind the kit at Tora Tora and the band there was great at interacting with them.  So cool to see young kids loving rock and roll.  I ran into the fellow cruiser who had organised this whole shabang and she looked tired.  She handed me a guitar and asked me to deliver it to L.A. Guns, telling me where they were having lunch.  Before I could ask anything else, she was gone like a magician’s trick, poor girl had so much to do.  Off I went, beer in one hand and the raffle guitar in the other.  I spotted Steve Riley seated at a table eating lunch and passed off the guitar with a few words.  He seemed quite pleasant, but I didn’t want to disturb him for pictures and autographs during lunch, damn my manners that might have been my only opportunity!

During the set changes the DJ’s kept the tunes pumping and they played several things that I was not expecting (Jackyl’s “She Loves My Cock” for one, not often you hear that at a function…lol).  I noticed a t-shirt while I was mingling and trying to make my way back to my railing and the newly made friends that were guarding my post there and I laughed out loud……”Rock & roll all night and fiber every day”. 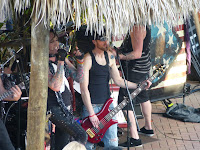 Liberty Lush was next up and they stormed the tiki hut with a great energy.  I had searched them out on the internet prior to starting my journey and was able to listen to some song samplers through their website.  Liberty Lush is currently on tour with L.A. Guns.  They had some cheerleaders that had been noticed by my new friends and I earlier on, but now they were right down in front.  We dubbed then “Team USA” as they were all decked out in US flag bikini’s that had Liberty Lush printed on the posterior, not that I was looking! By this point the breeze had started to get up and it was actually quite chilly.  Damn, that’s two nights in a row that this hardened Canadian is cold in Florida, what’s going on here?  One of my newly made friends hotel room was near by and they procured a sweater to lend me, life savers! 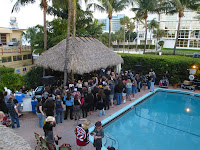 Bang Tango was next on the bill and the crowd started moving in, bad news for a short guy such as myself!  I decided to remain at my upper railing post enjoying the company of my life savers rather than moving front and center, after all they will be in Toronto a few days after the cruise anyway.  I was a little disappointed with their performance, granted my intake of frosty adult beverages by this time of the day was at a high level and may have assisted in clouding my judgement, but the sound was not very good up here at the top balcony railing.  I could barely hear the guitar and Joe Leste’s voice sounded terrible.  I’m not sure if maybe he had a cold or was sick or if there was a sound issue.  In any case they rolled through their set playing their hits and selections from the latest CD, Pistol Whipped In The Bible Belt.  I then understood a lot better 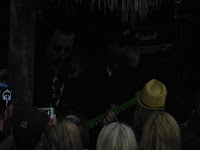 why the young girls were there as Joe brought them on stage, announcing that they are students of Bang
Tango and are going to sing a song with them.  Very cool, these kids have awesome pa
rents…lol.  They sang “Suck It Up” and did a decent job, getting cheers from the audience.  By this time our attention had wandered again and settled on a window in the Sheraton hotel next door.  Someone had pointed out that there were topless girls easily seen from the window and they were not wrong!  I suspect that it was some sort of photo shoot. 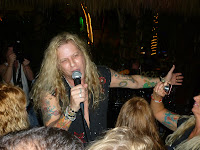 I returned my borrowed sweater as one of the ladies in our group was starting to feel the chill and headed down front to try for a decent vantage point for Ted Poley.  Ted looked happy to be playing and is generally such a nice guy in person as well.  There were a couple of sound issues at the start of his set and by about the fifth song there was a full on problem, taking several minutes to resolve.  I noticed that it was much warmer down here surrounded by the audience who apparently make excellent windbreakers!  Things got going again and Ted announced that he would have to cut his set short a bit due to the problems asking L.A. Guns to be patient with them for one more song.  One more song quickly turned into three with no complaints from the crowd.  Ted played “Don’t Walk Away”, followed by the Danger Danger hit “Naughty Naughty” and they closed out with a cover of Ozzy’s “Crazy Train”.  Last year’s cruise was my first time seeing Ted and that show had been acoustic, so this plugged in show was another first for me and I was not disappointed at all.  I really have to try to catch up with Maz in the next few days aboard ship for our interview, he is a great guitar player. 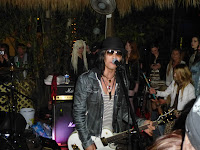 While down front I was joined by a friend from last year’s voyage and also met several other folks, in particular a gentleman from Nova Scotia, who often visits Toronto.  Now what prompted me to introduce myself to him was his t-shirt.  The absolutely incredible local Toronto band, Diemonds!  L.A. Guns took the stage and I could hardly see anything, just held the camera over my head and hoped for the best as I snapped several photos.  They sounded great and I really wish that I had a better view for this my first experience with the Guns.  Part of me also hoped that we might see some sort of appearance from Tracii Guns as he and Phil Lewis have recently buried the hatchet.  I guess there are still some things between Steve Riley and Tracii and it was only a couple of days ago that the hatchet got buried, but it’s OK to wish and dream sometimes.  Guns played all their hits during the shortened set like “Rip & Tear”, “Over The Edge” and “Never Enough”.  Part of my plan here was that catching this show would alleviate any schedule conflicts aboard ship, but now it’s only made things worse as I want to see their set even more so now after tonight. 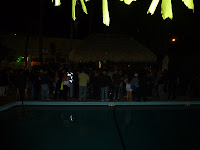 I decided that it was time to leave, perhaps my decision was wisely brought on by my staggering about.  I did have a second to catch up with a friend of podcast host Chris’ for a few minutes.  After that I made my way to meet my friend from last year and I was stopped by a guy who was absolutely enamored with my shirt.  He started off by asking me about it, but quickly moved into throwing out dollar amounts that he was willing to pay for it.  He ended at $120, before he was coaxed away by his friends, saying he’ll see me on board and claiming to have the shirt by the end of the voyage.  Who knew that a Four Horsemen shirt from a Canadian tour in 1994 would generate that kind of buzz.  He was certainly a nice guy and I look forward to hearing his next offer….lol.  All in all an awesome night, still amazed that no-one fell into that pool!

My friend and I closed out the night with dinner at a bar on the beach and being joined by several of her friends.  They were all quite intrigued by the work on my tattoo sleeve and generally seemed like a great group.  Wow, soooooo many new friends this year mingled with old friends, this trip has been absolutely awesome so far and it’s only day #2!!  Time to sleep off the effects, big day planned for tomorrow……..wait until you read this one, stay tuned.