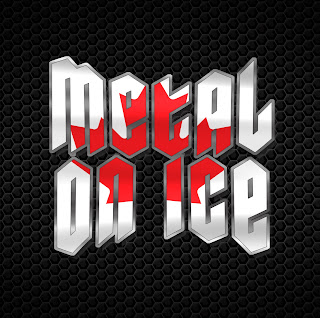 Many of the Decibel Geeks are no doubt aware of my proud Canadian heritage and today marks one of my proudest moments ever as a fan of Canadian Hard Rock and Heavy Metal. An advanced copy of the Metal On Ice EP is now playing ultra loud through my sound system for the third time in a row and I declare now that Canada Day has been changed to October 22nd when this EP becomes available to the metal hungry masses. If we cant officially move Canada Day, then I will be recognizing it as Hoser Heavy Metal Day from this year on.
For those that might not have a clue just what the hell I am talking about, let me fill you in. Rocker and now Author, Sean Kelly has recently published an incredible new book entitled “Metal On Ice – Tales from Canada’s Hard Rock and Heavy Metal Heroes”. This book digs deep to capture the sights, the sounds and the smells of many of Canada’s greatest heavy metal treasures. Culled from countless personal interviews with such bands as Helix, Killer Dwarfs, Brighton Rock, Coney Hatch, Lee Aaron, Slik Toxic, The Headpins, Honeymoon Suite and many, many more. Sean gives the readers a glimpse into what it was like out on the road as a working Canadian band, with it’s unique musical and geographical challenges. As a music book junkie, it is one of the best rock n roll reads I have ever come across and the only thing that pisses me off about it, is that I didn’t write it first. Kudos to Mr. Kelly.

What makes this book so special is the personal approach of the author. Sean Kelly is both an accomplished guitar player (Crash Kelly, Helix, Nelly Furtado, Gilby Clarke) but is also one of the genre’s biggest fans. It’s that honesty and passion about this music, he loves metal and Helix and Lee Aaron and Coney Hatch every much as I do and that excitement translates to the reader making it seem like your best friend is writing this book and not a “journalist” sent out on assignment. I am sure this also played a part in the way the artists being interviewed opened up to him with some incredible and entertaining road stories.
It is this passion that also fueled the idea for a “Metal On Ice” EP. Some companion music to listen to while you turn the pages of the book you might say. So Sean assembled some of Canada’s Heavy Metal royalty (Lee Aaron, Coney Hatch’s Carl Dixon, The Headpins’ Darby Mills, Killer Dwarfs’ Russ Dwarf, Helix’s Brian Vollmer and Slik Toxic’s Nick Walsh), added the killer rhythm section of bassist Daryl Gray (Helix) and drummer Dave Langguth (Nelly Furtado, Allanah Myles) and handled all the six string duties himself. The result is the Metal On Ice EP and in a word it’s outstanding.
To me re-recording some of the Great White North’s finest rock makes for a great treat for all metal fans. Listening to Lee Aaron belt out “Metal Queen” in 2013 gave me goosebumps, Russ Dwarf on “Keep The Spirit Alive” has me doing headstands in my living room. Brian belts out “Heavy Metal Love” like it’s 1983, Darby Mills hasn’t lost a step with a killer version of “Don’t It Make Ya” and Carl Dixon’s “Hey Operator” sounds as fresh as the day Coney Hatch released it. It’s like none of these singers have aged a day, every song maintains the integrity and energy of the originals.
Two other tracks make up this EP, Kick Axe’s “On The Road To Rock” with Slik Toxic’s Nick Walsh handling the lead vocal duties. From 1984’s classic metal masterpiece “Vices”, this song has been given new life with Kick Axe bassist Victor Langen on bass and Nick doing a masterful vocal track causing the hair on my neck to stand up and rock!
…and now for something completely different. Sean and Nick Walsh wrote the title track “Metal On Ice” that lyrically captures the spirit of the book in a four minute balls out rocker that features Lee, Brian, Carl, Darby and Nick trading off on the vocals throughout. A great addition that you won’t find anywhere else.
Quite honestly, this EP should be included as required listening for any self respecting metal head Canadian or otherwise. Remember October 22nd is now officially “Hoser Heavy Metal Day” so grab your touque, your back bacon, some Molson Canadian, the Metal On Ice EP and turn it up real loud….eh!