My Son the Hurricane 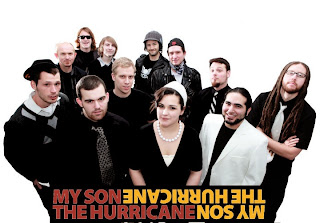 Recently, my good friend Dawn contacted me and asked me if I was free to help her on June 9th. She didn’t tell me why, she simply told me that she desperately needed my help all day and night. As luck would have it, I was indeed available, and agreed to help her without any clue as to what she needed. All she would say at first was “You’re gonna hate me after it’s over! You’ll be more exhausted than you’ve ever been.”  I thought, “What have I signed up for?”
Turns out it was about the coolest volunteer job one could ever ask for! Dawn is the Sound Crew Coordinator for the S.C.E.N.E. Music Festival in St. Catharines, Ontario.

S.C.E.N.E. is a HUGE one day music festival, featuring over 150 bands on eight different stages throughout Downtown St. Catharines. Our job was to  walk around in a constant loop, stop by the 8 stages, and check if the audio techs had everything they needed. We brought them equipment, water, lunch, dinner, and basically anything they needed because they couldn’t leave their posts.
This was about the most fun day I could imagine and a dream come true for a hairdresser obsessed with taking photos of cool and funky hair!! The colours, the styles, the awesomely cool dreads. It was also the first time I met Danno, My Son the Hurricane’s drummer, although I didn’t know who he was at first.

We were running around so much that we barely had time to stop and watch any of the performances and I didn’t think, for a minute, that there would be any opportunity to review any of the 150+ acts, but one band literally stopped us in our tracks.We were so awestruck , in fact,  that we completely neglected our audio techs for the band’s entire set!

My Son The Hurricane are an incredible combination of Brass Band, HipHop, Metal, and – as they so aptly put it – a healthy dose of groove. The band features 8 horns (4 sax, 2 trombones, 2 trumpets and a sousaphone) and a rhythm section of drums, guitar, bass and percussion. All of which support the ultimate MC, Mr. Jacob Bergsma.
They have been featured on CBC Radio One and Canada’s Much More Music and have headlined a number of music festivals from coast to coast.

https://www.mysonthehurricane.com/
We were on a water run when My Son the Hurricane took the stage. It proved to be a while proved to be a while before any water was distributed! Oops!!
The fourteen member group filled the stage both sonically and visually. Emcee Jacob Bergsma took the crowd by storm with his high energy, hiphop style.  The band were clearly a well oiled machine, creating an impressive cohesion between so many genres of music.
They played a selection of tracks from each of their three CD’s including all three from their brand new EP Cashing a Deadman’s Cheque that was released in March.

Special guest Sarah Beatty accompanied Jacob on “Ain’t My Style” from  their 2009 release Check the Barometer, and “Pushing Up Daisies” from their 2011 release You Can’t Do This. She is a friend of the band and a local singer/songwriter who really knows how to get her funk on. The crowd loved her.

Then came the piece de resistance, perfect for a metal head like me!!! The drummer counted in song number six and the horns kicked into a very familiar riff. “No way!” I thought. “Not possible! Is it?” And low and behold it was! Metallica’s “For Whom the Bell Tolls” played by a  totally amazing genre-bending band and featuring
killer vocals from the MC himself.

https://www.youtube.com/watch?v=Zvy1YqwMk0o&sns=em
It was AWESOME!! I was hooked! I now needed to find out all I could about this band because I knew I had become a fan for life! They closed the show with “Poison in the Water” from the new EP and Jacob did a little crowd surfing before bidding farewell to excited fans both old and new.
Moments later the band members were at the merchandise table to meet and greet their fans. I  purchased a CD and chatted with the drummer (the guy with the great dreads) for a minute or two. I learned that they are all local guys from Toronto and surrounding towns and cities. I’ll definitely check their tour dates and look forward to seeing them again soon.
My Son the Hurricane are most definitely worth checking out. A bit of a departure from the bands I normally review but I’m excited to introduce them to the Decibel Geek world. Hope you enjoy:)