Nice Day for a DWaRf Wedding. 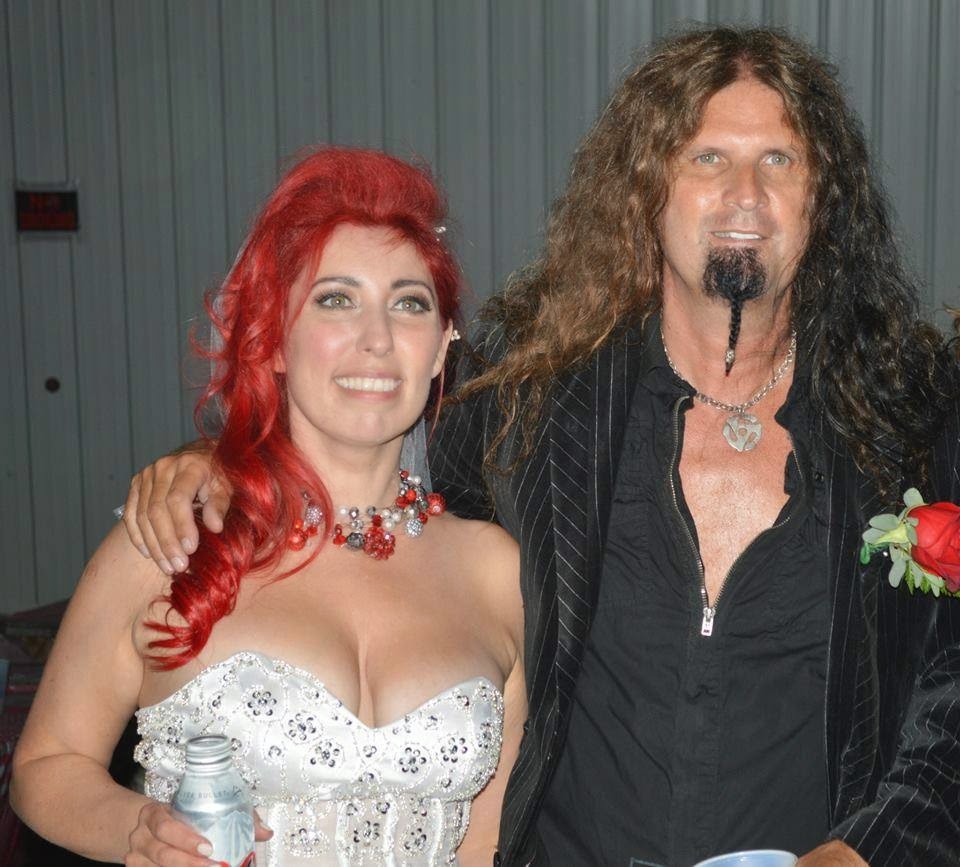 July 25, 2014.  I’ve been looking forward to this day for months. For me, this beats all the other events of the summer. We’re heading down to Buffalo for a rockin’ concert and the wedding of Darrell Millar (aka Darrell Dwarf) and his long-time girlfriend, Stracey Burtch.
The venue is one of the coolest I’ve been to.  Braun’s Bar and Grill, in the quaint little town of Akron, NY, is a favourite of the DWaRfs. The owner, Ray, has become a good friend of theirs over the years and he is actually the one hosting the free concert and also the wedding. 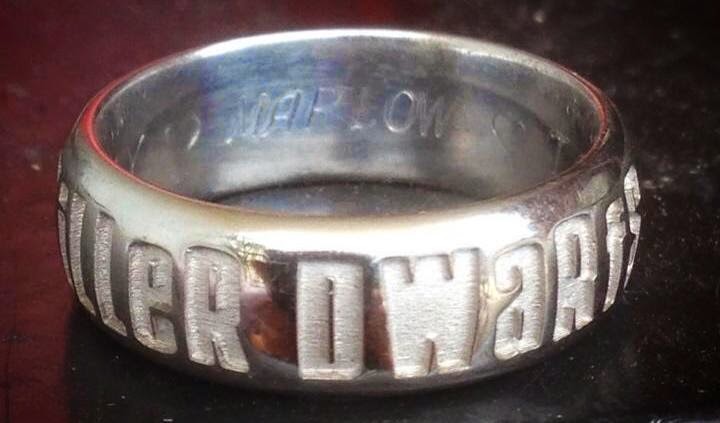 The line-up is great. John Corabi will play a set, followed by his band, Cheap Thrill, and then there will be a real live rock n roll wedding, on stage, with the ceremony officiated by the Rev. Luc Carl from Sirius XM Hair Nation. Closing the night will be a concert by the KiLLeR DWaRfS. Awesome right?? Right!
We arrived at our hotel around 6:00pm and it was spectacular!!! Salvatore Garden Place is filled with old world Italian grandeur. It’s right there, as you get off the highway, and it’s breathtaking. We checked in and headed out right away. We cabbed it to the venue (of course) which is between Buffalo and Rochester, about 15 minutes from the hotel.
Walking out to the patio and down to the ‘Concert Cove’, the first face I saw was John Corabi. 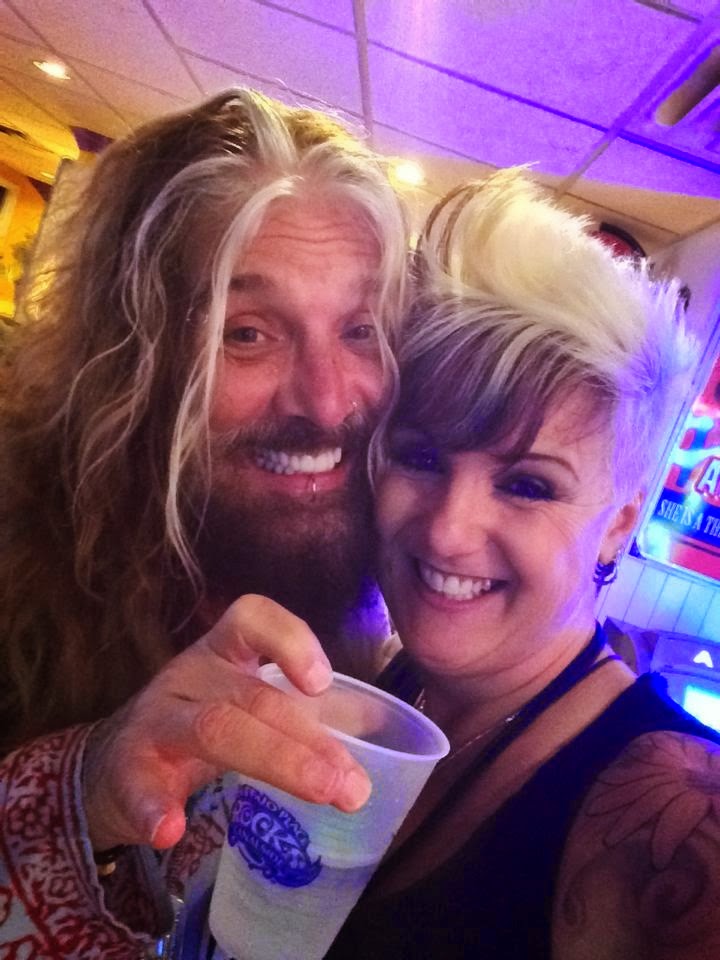 He’s such a friendly fellow. I’d met him briefly on the Monsters of Rock Cruise, so a big hug was needed to greet him. (I think I’m known internationally as the Canadian girl who hugs everyone.)
He had already played his solo set before we got there (darned border crossing delays, get us every time!!) but he was just about to go on with Cheap Thrill.
The ‘Concert Cove’ was buzzing with energy. Every time I turned around, I saw another familiar face, here to support a great couple, fantastic musicians, and have a good old rock n roll time. Ray Braun has done an outstanding job of bringing a top notch concert venue to the small town of Akron. It’s a great place to eat, drink and party with friends. I can’t believe I’m just finding out about Braun’s!! It’s definitely one of my top places to see live shows. I’m hoping there will be many more opportunities to visit Braun’s but it’s future is somewhat uncertain, due to a few influential people and some extremely dirty politics. (See the link at the end of the article.)

We took our places in front of the stage along with many familiar faces. It was somewhat of a Monsters of Rock Cruise reunion. People had flown in from far and wide for this event – from Minnesota, Missouri, New York City and, of course, a great showing from north of the border.  Cheap Thrill were so much fun. I hadn’t seen them play before but we completely enjoyed both the music and the great energy. There was a young boy (about eight years old) sitting on the stage and he was totally rocking out, following Crabby’s riffs on a mean air guitar.  It’s always great to see rock appealing to youngsters like that. Next up was a real live Rock ‘n Roll Wedding. The guys took the stage. 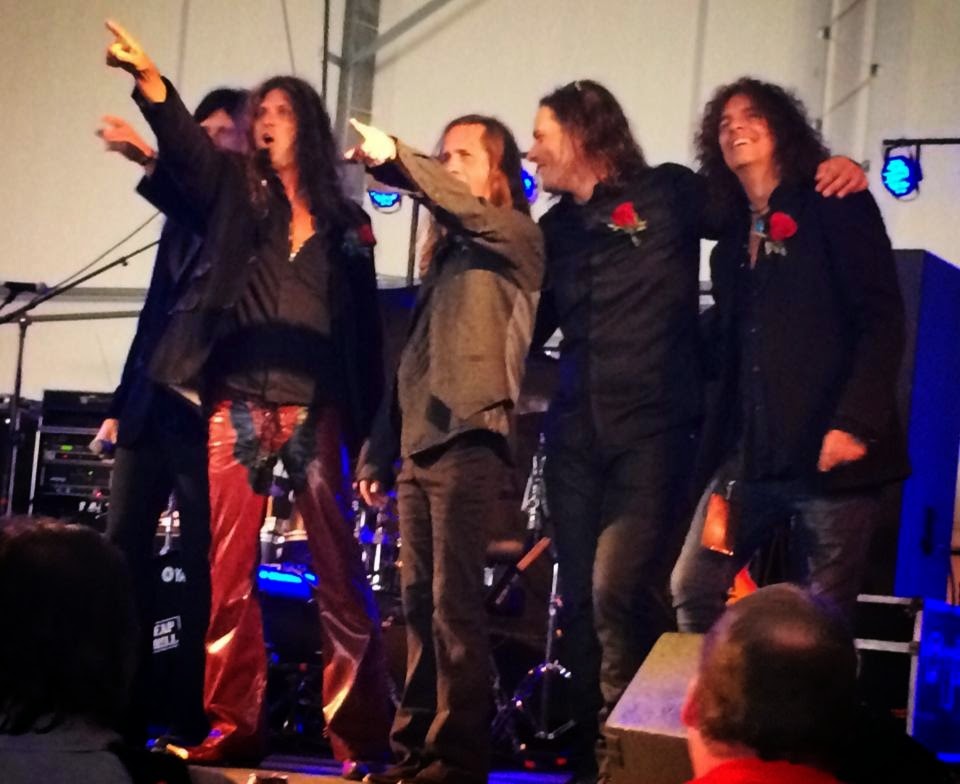 It was no surprise that Darrell’s ‘best men’ were Russell, Gerry and Johnny Dwarf. Also on stage, ready to officiate, was Luc Carl. Stracey arrived in a wicked cool, yellow Lamborghini, 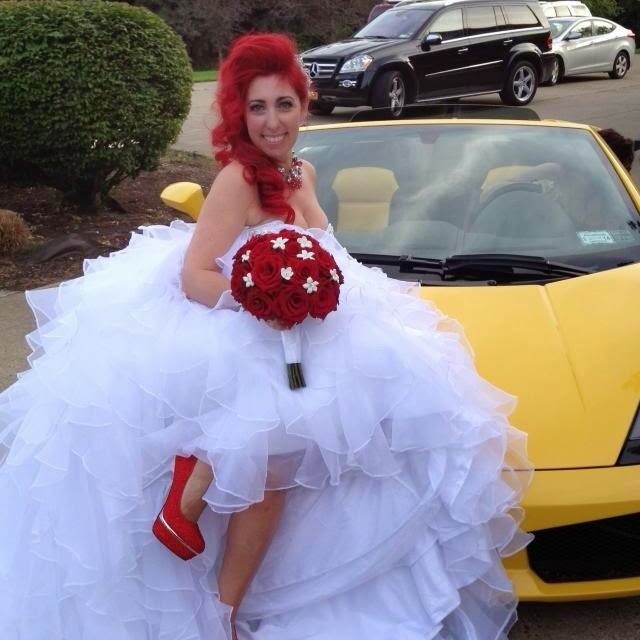 chauffeured by bar owner, Ray Braun. It was a perfect rock n roll entrance.  It was so cute when the guys saw Stracey arrive – they all pointed, excitedly, to the back of the venue, then pulled out their phones and started snapping photos.
The sound of AC/DC’s Hell’s Bells rang out and the processional began with beautiful Marlow Millar, (Darrell and Stracey’s four year old daughter), accompanied by Stracey’s two gorgeous bridesmaids setting the stage for the stunning bride, who was proudly escorted by her uncle. Darrell was certainly glowing with pride as his bride stepped up on to the stage and the ceremony officially began. 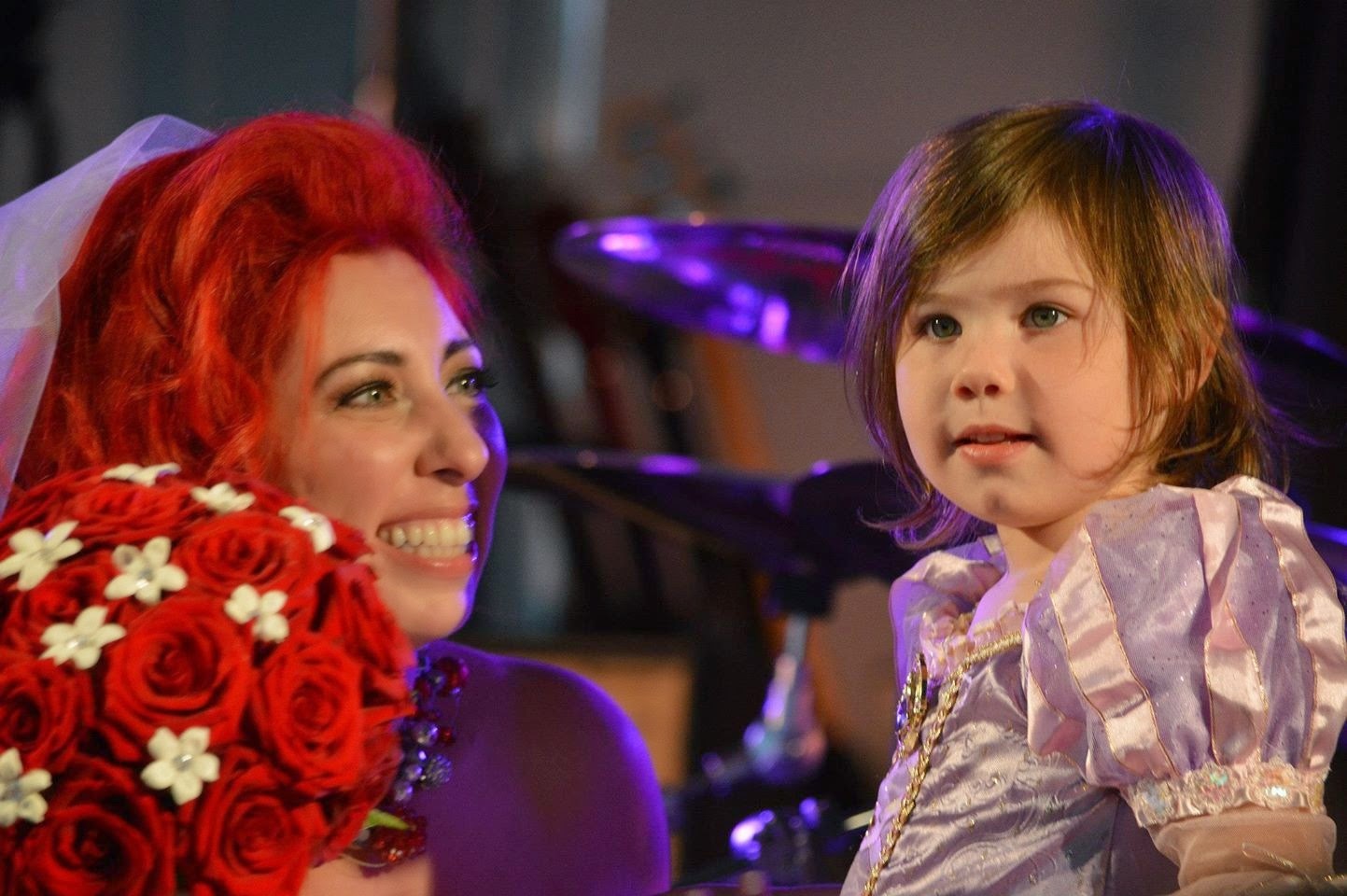 The Ayatollah of Rock n Rolla (aka Rev. Luc Carl) laid on the perfect set of vows. Short, sweet and very rock n roll. Four year old Marlow, had Mommy’s ring, for safe keeping, and was beyond adorable when called upon for the ring. She ran to her Dad , calling out “Daddy, here’s the ring!” With a cymbal crash, each said their ‘I do’s’ and, with their choice of wedding song being ‘Long Live Rock n Roll’, it was on with the party!! The DWaRfs then played a killer set, ending up with a stage full of musicians and friends and even the bride, to close off the concert with a bunch of great cover songs by BTO, AC/DC, Goddo and Led Zeppelin to name a few.

It was an incredible night – one I’ll never forget!! The party continued on into the night, catching up with old friends, and making new ones. Then, it was back to the hotel for a few hours sleep before heading back over the border and back to reality once more.
Until the next time, which won’t be long, I promise.
Rock on and Keep the Spirit Alive. 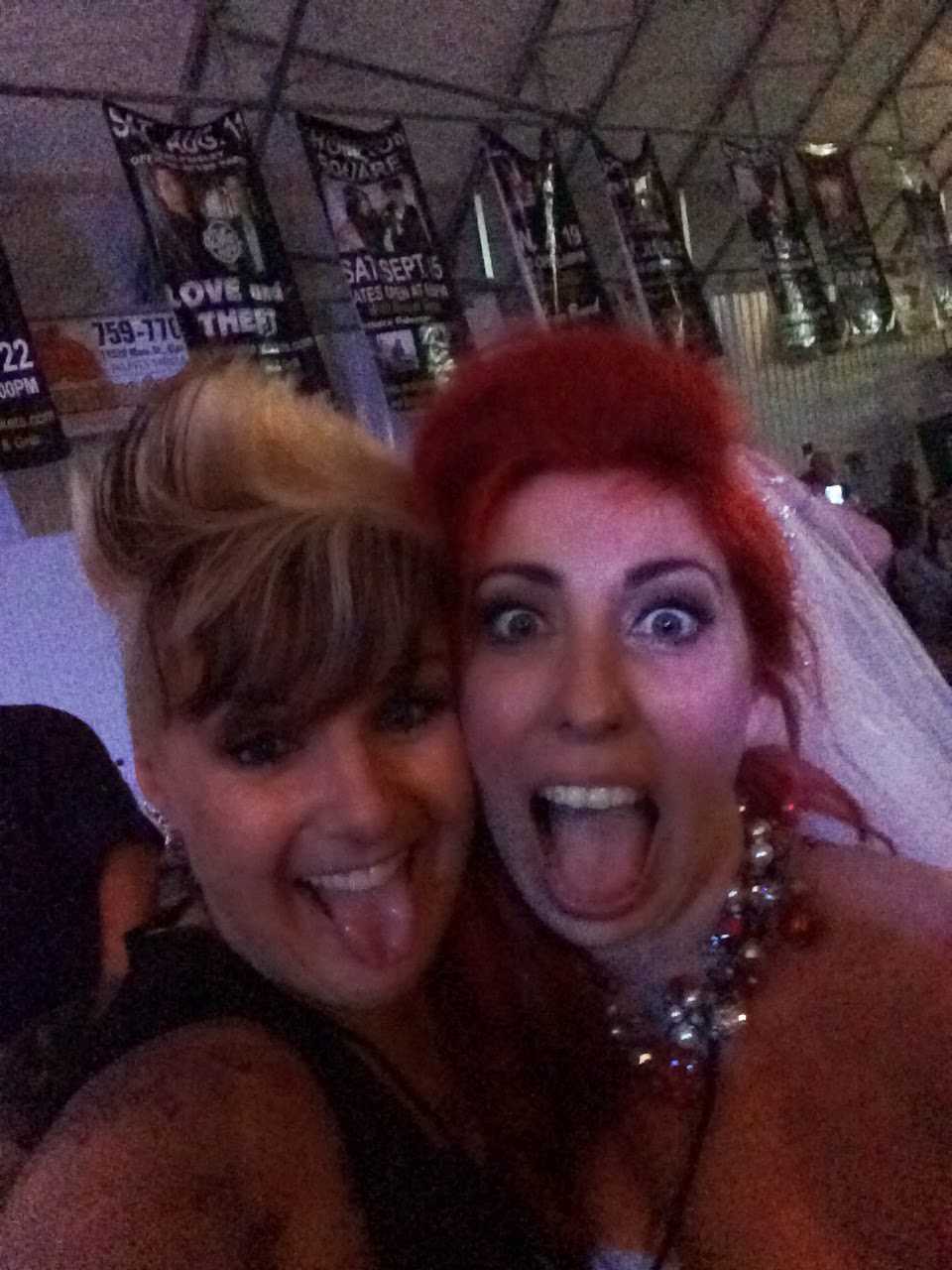 Kate Campbell,
(a proud member of Dwarfnation) signing off.

Here’s some great footage of the wedding.
https://www.youtube.com/watch?v=g4cnIQ7Lfu8&sns=em

The kid shredding on the air guitar with Crabby.
https://youtu.be/yymM1W6jW9I

One last thing:
Some people with some very dirty politics are trying their hardest to s
hut down Braun’s Bar and Concert Cove. Please check out the following link and share it to spread the word and help a local small business stay alive.

Photo credits to Joel Naphin, Darrell Millar and Tracy Milne and April Lee (except my awesome selfies and the one of the guys;))
Also, thanks as usual to my good friend Amanda Schumacher, who always double checks my punctuation and grammar before I go to print. 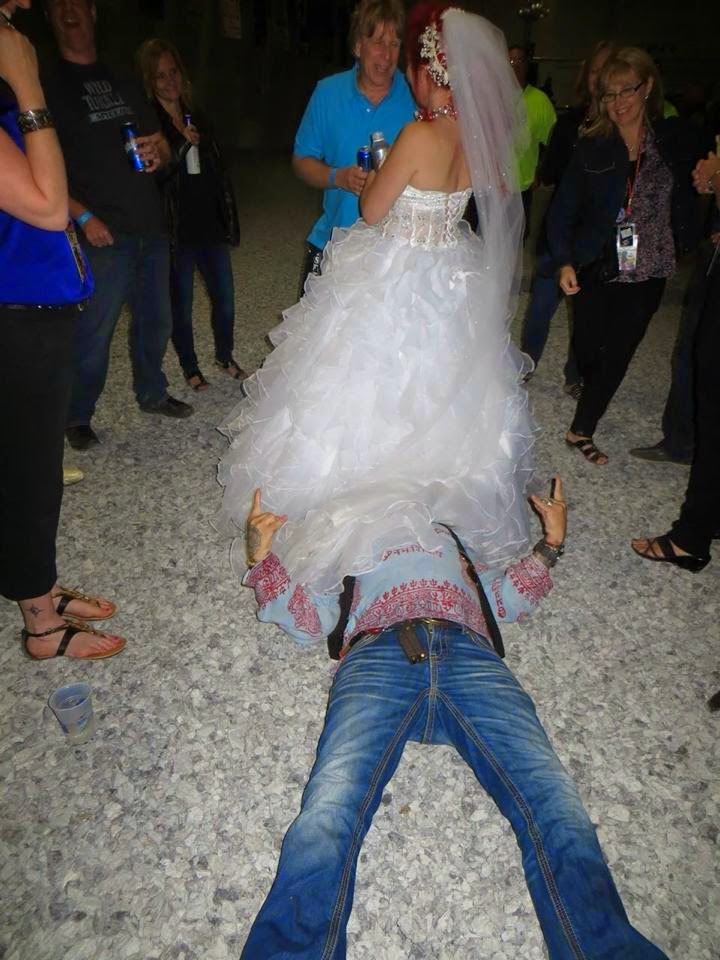