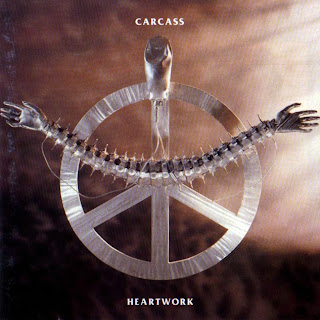 In October of 1993 something very strange happened: two well-known death metal bands, Entombed and Carcass, released albums that were entirely listenable. Each band went beyond simply injecting discernible melodies into the chaos, they wrote and recorded accessible songs with actual hooks. Entombed decided to take their death metal in a very cool rock and roll direction on Wolverine Blues but Heartwork, the album Carcass released in 1993, is pure, finely-tuned thrash metal.
Heartwork didn’t exactly come out of nowhere. While Entombed’s early work might have been your run of the mill, barrage of noise death metal, Carcass always had melodies lurking beneath the din. In fact prior to Heartwork Carcass’ 1991 album Necrotism-Descanting the Insalubrious (i.e. Death Worship-A Long, Boring Treatise On Its Inevitability) probably held the title of “Most Melodic Death Metal Album,” the problem being that the production on that record opted for brutality over precision. Heartwork was not a sell-out, it was a sharpening of the sound, a honing of the brutality. The band were working with the same producer, Colin Richardson, thus the shift in sound must have been a conscious and collective effort, but they definitely weren’t aiming for airplay or a chart position. Yes, the record is cleanly produced on purpose, as I suspect the sound on Necrotism was muddied on purpose, but that’s creativity, not pandering. Vocalist Jeff Walker maintains his ominous death metal screech on Heartwork but strives to serve the melodies of the songs at the same time. What’s wrong with that? It’s an odd dichotomy but it works.
The first track on Heartwork, “Buried Dreams,” is a perfect example of what I’m babbling about. The riffs are brutal and precise, the vocals horrific and jarring, the chorus melodic and somehow singable. All of that happening at once might not seem possible until you’ve given it a listen, so give it a listen:

The second song “Carnal Forge” sounds more like the Carcass of old, it’s a death metal song with slight prog leanings. There is definitely a prog metal vibe throughout the album. Third track “No Love Lost” is a groove-laden monstrosity and an uneasy yet enjoyable listening experience. If you could understand the lyrics you’d probably be even more uncomfortable.
Up next is the title track. The melodic guitar intro reminds me of Megadeth but the song swiftly devolves into a death thrash assault. Its a great song, skillfully arranged and produced. The band were forging new ground with a track like this: melodic guitar juxtaposed with a caustic verse resulting in a killer chorus. It would take awhile for mainstream metal to catch up with Carcass.
A slightly boring interlude called “Embodiment” lies between “Heartwork” and a headbanging workout called “This Mortal Coil.” The song sounds like Iron Maiden possessed by demons, locked in a dungeon, trying to bust out.
Next up is the ominously titled “Arbeit Macht Fliesch.” The hellish “Work will make you free” Auschwitz slogan is bastardized into “Work will make you meat.” The song seems macabre and insane but a closer inspection of the lyrics leads me to believe that it is actually a social commentary on the futility of working yourself to the bone for an employer that views you as a disposable hunk of meat. Capitalism=meatgrinder. They own you and will wring you dry.
Up next is “Blind Leading the Blind,” a Helmet-esque stop/starter. And now we’ve come to perhaps my two favorite songs on the record, for some reason they put them both at the very end. First comes “Doctrinal Expletives,” a pounding riff assault with a great chorus.


The last song on the album is called “Death Certificate” and it’s a vengeful headbanger’s delight.
If you like your music heavy yet melodic, look no further than Heartwork by Carcass. Holy shit is it heavy, yet the songs have hooks. Guitarist Michael Ammot left Carcass after this album and formed a seventies inspired stoner metal band called Spiritual Beggars. Carcass replaced him with Carlo Regadas and recorded one more album for Earache called Swansong, similar in style to Heartwork but not quite as good. One song called “Black Star” really stood out.
Guitarist Bill Steer left at this point and the remaining members of Carcass replaced him with Mark Griffiths from Cathedral, renamed themselves Black Star after the song, and released a great record in 1997 called Barbed Wire Soul. Very little of their death metal past remains, this is more of a rock record. Check out “Sound of Silence” and “Deep Wound.”
Carcass reunited in 2008 and have been playing festivals here and there ever since. No new music yet, but hopefully soon.