Now Hear This: Slade In Flame 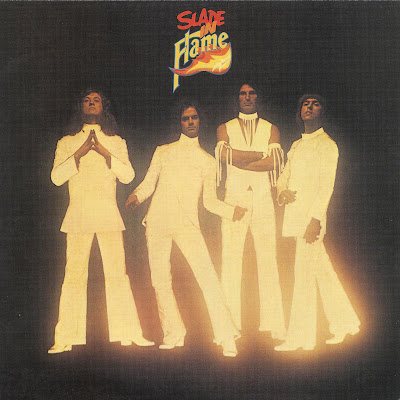 Between October of 1971 and October of 1974 Slade released an astonishing twelve consecutive top ten singles in the UK and half of them hit number one. The song that broke that amazing streak, “How Does It Feel,” which only made it to number fifteen in February of 1975, is quite possibly the best song of the bunch. “How Does It Feel” is the opening number of the album Slade released in 1975, Slade In Flame, which is essentially the soundtrack album to the feature film the band starred in that year, Flame.

Slade’s previous two albums, Slayed and Old New Borrowed & Blue (aka Stomp Your Hands Clap Your Feet in the US) had hit number one in the UK but Slade In Flame would only make it to number six. As these numbers foretold, Slade In Flame and its accompanying film were the beginning of Slade’s descent from the heights of superstardom in the UK. The band’s next album, 1976’s Nobody’s Fools, would only reach number fourteen on the charts and the album after that, Whatever Happened To Slade, wouldn’t chart at all. The thing is, neither Nobody’s Fools nor Whatever Happened To Slade really deserved to be top ten albums. The title track of the former is a great tune and the NWOBHM anticipating songs on the latter are entertaining, but the quality of tunes present on the band’s earlier hit albums was not matched, not even close. Slade In Flame, though, was a brilliant record, probably my favorite of the band’s albums, although Old New Borrowed & Blue gives it a run for its money. Slade In Flame should have catapulted the band to even greater heights, not precipitated its decline. 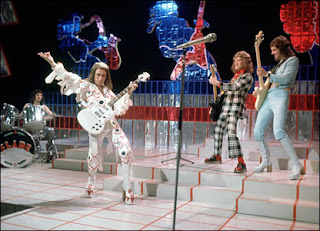 Basically UK rock fans began to lose interest in Slade an album too early, apparently they were burned out on Slademania. Slade’s enormous popularity had opened the doors for numerous other glam rockers, to the point that record labels were churning out single after single by this band and that band, you know the story: oversaturation. But Slade were a singular group, Noddy Holder and Jim Lea were supremely talented songwriters and the music Slade made in the first half of the seventies was truly unique and wonderful.
Slade’s unprecedented run between 1971 and 1974 may have amounted to overexposure but Slade In Flame was not just more of the same, the band was progressing, the band was getting better, the songwriting was stronger, the melodies more intricate. One interesting aspect not often considered is this: the band found themselves writing songs for fictional bands whose members they would portray in the film. This dynamic offered vibrant creative opportunities, it opened them up to try new things, explore different ideas. They came at the album from a fresh perspective. Thus Slade In Flame is in some ways the band’s most eclectic and creative piece of work, at least up to that point. It is important to note that there are two different versions of the album.
The UK track listing looks like this:
The US track listing looks like this:
In the US “Summer Song” and “Heaven Knows” were replaced by the UK single-only tracks “Bangin’ Man” and “Thanks For The Memory.” Although I like the former pair of songs a lot I’d have to say that the latter pair are better, thus the US version is a stronger record overall. The majestic album opener “How Does It Feel” is followed by a cheeky rocker called “Them Kinda Monkeys Can’t Swing” which is performed by the fictitious band Flame in the film. Check it out:
The third song on the album is not only my favorite song on the record but probably my favorite Slade song period, “So Far So Good.” This is one of those rare, amazing songs where I love the verse melody even more than the chorus melody, even though the chorus is fantastic.
The fourth song on the record is either “Summer Song” or “Bangin’ Man.” Please vote for which song you like best in the Comments section below (links provided–click song title). The last song on Side One is a classic Slade tune, “O.K. Yesterday Was Yesterday.” Punchy melody, just tons of fun.
Side Two begins with the first single released from the album, a top ten hit called “Far Far Away.” It’s a brilliant song, quite folky but it still sounds like Slade. It’s a moving tune. Great lyrics as well.
The next song on the album, “This Girl,” provides our introduction to Noddy Holder in the film. At the beginning of the movie Noddy is the frontman of a rival band to the other three members of Slade, The Undertakers, and he starts out the performance of this song in a coffin from which he is supposed to rise, on stage, but he gets stuck inside it. Hilarity ensues.
“This Girl and “Lay It Down” are my least favorite songs on the album. I still like ’em though! They are followed by either “Heaven Knows” or “Thanks For The Memory.” Once again, please vote for which song you like best in the Comments section below (links provided–click the song title). The last song on the album is a raucous rocker called “Standin’ On The Corner.” Noddy’s breakneck delivery of the quirky lyrics cracks me up.
She’s a shoe shinin’ shimmy shootin’ high falutin’ rootin’ tootin’ baby yeah!And she’s found herself a shimmy shootin’ high falutin’ rootin’ tootin’ man!She’s a hard casin’ fast racin’ male chasin’ boot lacin’ baby yeah!And to get her evil way she’ll do most anything the devil says she can.
The song plays an important role in the film, the band (Flame) perform it for an ecstatic crowd of young girls as they hit the peak of their popularity. Slade are one of my very favorite bands, they were a brilliant rock band with miles of personality and seemingly unlimited talent. Alas there was a limit, they hit a rough patch but came back strong in the early eighties with a gaggle of great songs. In 1975 they were massive stars in Europe and a feature film was the obvious next step. But Slade were smart about it and deserved more recognition for the results, not just for the amazing songs they wrote but also for the kind of film they chose to make. They took the project seriously, it was not a vanity project. Flame tells a stark tale about the dark side of the music industry. Hungry young musicians put together a band, hook up with shady management, become breakout stars, and everything goes to shit. Slade shocked everyone at the time by actually releasing a quality film which an open-minded audience would find thematically challenging and emotionally satisfying. Believe it or not it’s a damn good movie, and you can watch it right now on Youtube.