PANTERA…Just What The Doctor Ordered! 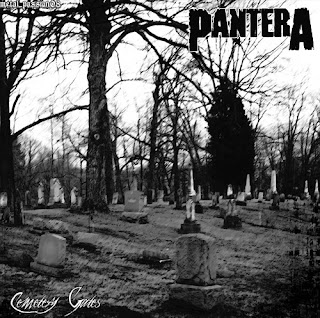 By the late 80’s, the music scene was dominated by metal, pop metal and rap. By the start of the 90’s, the heyday of metal was slowly coming to the end. Bands like Pearl Jam, Nirvana and REM were making their presence known that they weren’t in it for the girls or the booze. The party was over!
In 1990, while the grunge scene was flying high, and metal heads were running amok in flannel and doc Martians, a band named Pantera released its 5th album ‘Cowboys From Hell’.  Pantera, consisted of the Abbott brothers Darrell and Vinnie, Phil Anselmo and  bassist Rex Brown. The guys had already been around and had a reputation going for themselves, but it was this album, and the song ‘Cematary Gates’ that made the band stand out and more people take notice. 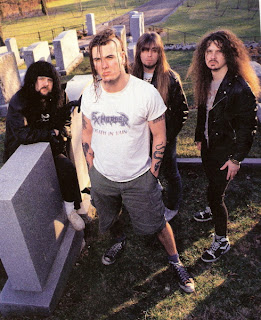 ‘Cemetery Gates’ isn’t your average metal song.  The length alone is just 7:04. I can imagine the original recording of the song. This is a epic song. Not epic in the sense of the length, epic in the masterful creation of the guitar merging with the drums and bass as it glides slowly through ones ears. It’s like Christmas Day for the ears and soul.  There’s no gloss or frosted tips here. No keyboards or auto tune necessary. This song is as pure driven as it gets. Darrell, or Dime’s guitar riffs are polished and tight. As he plays each riff, you can hear his brothers drums cheering his masterful playing on to victory. You forget the song is about death, it just sounds that great. The vocals of Phil Anselmo drive the song and move it through the veins. ‘Cemetary Gates’ is a head banging classic that is a must for every metal fan to have in their collection. Many call this song, and the album the inauguration of what was to be the glory age of Pantera.

The group would go on to record more albums, but issues would begin to surface among the members. Anselmo’s use of heroin would soon take front over everything and would begin a slow twisting end of Pantera. The last album the guys would record(and its said that there was so much animosity that the guys couldn’t even record together) , called ‘The Great Southern TrendKill’ would become the bands swan song album. The album, which was released in May1996 was a dark album. Thought to be one of the bands best albums, it dealt with the subject of drug abuse; a subject the guys were getting first hand education in. Soon, however tensions would boil over, and the band Pantera would be no more. In 2003, the guys disbanded Pantera, and without Anselmo formed DamagePlan. Now here is where things get messy. Anselmo says he was never told that Pantera was done, but the Abbott brothers say they tried to contact Anselmo to let him know what was going on. So, it’s a he said /they said situation. 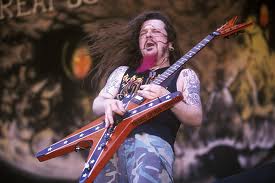 The Abbott brothers , with a new bass player and lead singer recorded ‘New Found Power’ and it was released in February 2004. The album was a commercial success, and brought a new group of fans, and previous fans to the world of metal.

On December 8, 2004, DamagePlan was playing a gig in Columbus, Ohio. Started out somewhat normal. A man named Nathan Gale, would make his way to the front onto the stage, just a minute into the set, and shoot Darrell ‘DimeBag’Abbott six times, killing him, along with four others before being killed himself by a police officer working security. DimeBag was 38. A man and his band who literally brought the American metal scene back from its coma, was gone. The world came to a slow, eerie shocked standstill. How could this happen? Darrell was laid to rest like any rocker would want, in a KISS coffin and with Eddie Van Halen’s bumble bee guitar. Fans still, like Rhodes, Hendrix and Morrison flock to his grave site, some to reflect and remember when and others to ponder and wonder what would music be if Dime was still here. 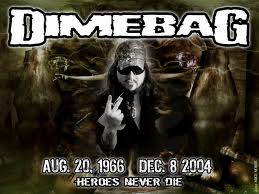 Darrell ‘DimeBag’ Abbott was a guitar player of the people. He was a fan of the music, and he dedicated his life to his art. Very few can say that about what they do, but he could say it and mean it. Dimebag, Pantera and DamagePlan were just what the doctor ordered for the American metal scene…And they brought it back from the dead. Pantera, was by all means, the shock that music needed, and shock they did…RIP ST. DIME.