Queensrÿche in England – With Queensrÿche's Own Kate Campbell 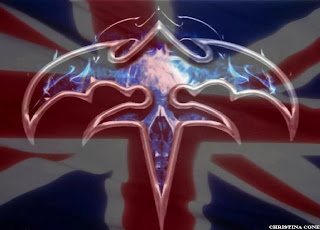 Queensrÿche in England
by Kate Campbell

So, here I am, after much anticipation – I am finally in England. The pinnacle moment of my trip is less than 48 hours away now and to say I’m excited doesn’t even scratch the surface.
This trip was, to say the least, spontaneous. After suffering the huge disappointment of Queensrÿche not being booked on the Monsters of Rock Cruise in 2014, and after I had booked my trip in anticipation of them making the return voyage – (my bad!) – a number of cool events took place, which have ultimately ended up with me here in England, about to meet the band.

So far, it’s been an amazing opportunity to visit with family and reacquaint myself with my heritage. It’s been almost three decades since I’ve been ‘across the pond’. I’ve been lucky enough to tour the historic town of Tetbury – where my mother grew up, and I’ve spent a day wandering around my cousin’s hometown Cirencester – another small, quaint town steeped in beautiful architecture and character.

I’m staying with the Kates. My cousin Kate, her partner Kate and me – we make up the Kate 3 crew, 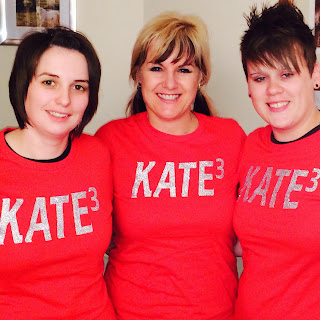 (although we’ve been referring to Kate #2 as Brenda to make it a bit less confusing).  The three of us will be attending the show and meeting the band.

My Facebook friend and fellow Queensrÿche superfan Matt is currently in London about to see their Islington show. I’m looking forward to hearing from him after the show.

The Kates are considerably younger than me and prior to my random self invitation to fly to England, crash on their couch and take them to a concert, they had no previous knowledge of Queensrÿche. They have done their research though and are becoming fast fans.

I’ve been in England now for a few days and it’s now the morning of the show. We had a rather late night last night and then, as I’d expected, I woke up very early, like a six year old on Christmas morning. I’m trying not to overthink the whole thing. I feel as though the last thirty years of my life as a Queensrÿche fan have all led up to this moment. (How’s that for not overthinking it!)?

I know the show will be phenomenal. There’s no chance it could be anything else. How it will feel to meet the band, however, is something I just can’t predict. I am more excited than I have ever been!!

We’re on our way to Wolverhampton.  It’s a typical English day – rainy and cold. The Kates purchased some quintessential Queensrÿche music – Operation:  Mindcrime – for our drive today. I have goosebumps inside and out!!! I can’t help but think about how all this came to be. After finding out that Queensrÿche had not re-booked on the Monsters Of Rock Cruise, I had posted my disappointment on their Facebook wall (still partially believing they would tell me it was a mistake). To my delight, they replied to my post, saying they were sorry to disappoint and would hopefully be on the 2015 cruise. Not the response I was hoping for but I was thrilled just to have a small dialogue with them. My friend (and former band mate, Stu) then messaged them to suggest that they get their dive licenses so they could scuba dive with him on the 2015 cruise and make me jealous – to which they replied “We’re already in enough trouble with Kate as it is!”  Again I was stoked!! Another mention!

I was out with friends at a local rock bar when I had the idea to fly to England and see Queensrÿche. Why not?! I’m at a point in my life where I’ve worked (and continue to work) very hard and playing hard is the reward. I booked my flight while standing at a local Toronto rock bar called The Rockpile, watching the Dio Disciples play a killer show.

My excitement grew. Queensrÿche’s album was set to be released soon and I had called dibs on reviewing it with my Decibel Geek counterparts. It took me longer than I’d expected to finalize my review. I loved the CD instantly but I had so much more than just that to say.  For me, it was closer to my heart than any review I had ever written. I finally finished and immediately sent it to the Queensrÿche Facebook page and the Queensryche Official website in hopes of approval and for them to post it to the band member’s individual sites. I received a response much faster than I had expected. “Wow” they said. “Thank you Kate! We’ll post it soon”. I was delighted. I must have checked Facebook a hundred times and then later in the day, I received another message saying “Don’t worry Kate, we’re saving the best for last!”  At 9:00 pm on Friday night, my review went live on their page. They introduced it by referring to me as ‘their own Kate Campbell’!! That’s right…’their own’!!!!!!

After I came down from the clouds I decided that this might be the perfect opportunity to pursue a lifelong dream. I posted on their Facebook wall “since I am now ‘your own Kate Campbell’, would you do me the honor of letting me meet you since I am flying all the way from
Canada to Wolverhampton just to see you?” 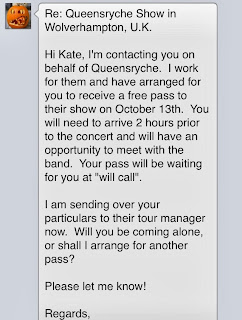 I had no expectations but again they responded. “No promises Kate but we’ll see what we can do.” I just responded with a smiley face but then, that’s where my friends decided to step in.  Dawn started it – posting some lovely words about me and urging Queensrÿche to allow me this opportunity. More friends followed suit. The outpouring of love was overwhelming. Even a stranger (now a friend) named Rita chimed in and by the next morning, there was a post on my wall from Queensrÿche urging me to check my messages. Dawn saw it before me. I received an urgent text from her…”check your FB messages!!!!!” I did and there it was.

So that is how I got here…now just a mere three hours away from a dream coming true! 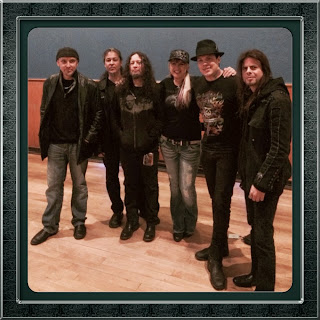 …and I have at least a thousand more after the incredible evening I’ve just experienced.

We arrived at Wulfrun Hall two hours before the doors opened as instructed. There were a few people milling about and the trucks were being unloaded into the venue. I spotted a guy wearing a Queensrÿche ID and decided he might be the guy to ask since it was a bit unclear what we were supposed to do next. He introduced himself as James and told us he was in charge of merch. When I told him why we were there, he immediately went off to find Fozzy, the band’s tour manager. Fozzy was awesome. He treated us like royalty – inviting us in to watch the sound check and then to stay to watch an interview with the band. We were the only people (other than the crew and the opening acts) in the venue. As soon as the band was done the interview, Fozzy asked them to come down from the stage to meet some friends. Us!!!

The whole band came down with smiles and hugs. It was truly beyond my wildest dreams. I asked them if I could do individual photos and then a group shot and if they would sign my shirt, my jacket, my CD and my Decibel Geek review of their recent CD. They graciously did it all. 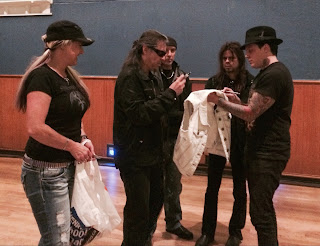 They were so fantastic!! We thanked them for their time and they thanked us for coming, leaving me in  a bit of a surreal state of mind. It all seems like a dream, because, in fact, it was. And now it’s a reality!

We decided to grab a quick bite to eat before the show so we wandered in to a local bar/restaurant and had a quick cocktail and some dinner while we reflected on the events so far.

We missed the first opening act but my new friend Simon said they were a bit screamy for the bill and we know how much I like ‘screamy’ so that was just fine by me. The second band was a local group named Awake by Design. Much more suited to this bill and I quite liked them. Four out of six had fantastic hair and weren’t afraid to use it!! The singer was a bit of an egomaniac but they were a good solid band and I’ll probably look them up sometime.

Then the moment we were all waiting for. The intro started and one by one Queensrÿche took the stage. They opened, as I’ve seen them do before, with Queen of the Reich. An amazing song and an immediate showcase of Todd’s voice for those who haven’t yet had the pleasure. 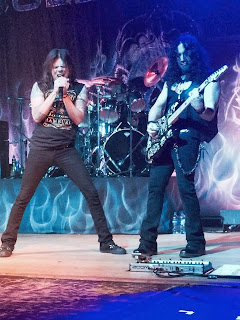 The set list was similar to the last two shows I’ve seen except for the addition of a couple of tracks from the new CD.  As usual it didn’t disappoint. For me, this show surpassed all others. Not only were we right in the front row, but Todd kept acknowledging me throughout the concert. For real ! It was awesome! At one point he motioned to me for my camera so I handed him my phone and he proceeded to take photos of each band member and then the audience. I was stunned! 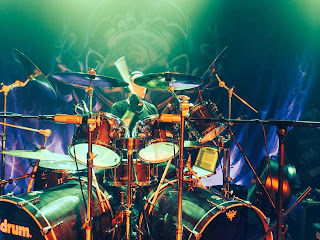 Photo credits left and below to Todd La Torre 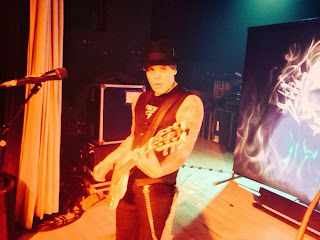 I tried not to have too many expectations and this whole experience ended up exceeding anything I could have ever imagined.

Queensrÿche are incredibly gracious and show such a great respect for their fans, it’s nothing less than heartwarming. One always hopes their idols will be everything they have always believed they are and in this case, my dreams were realized in exponential fashion. This has been a once in a lifetime experience for me. I’ve dreamed of this for thirty years and to have that dream come true is unforgettable.

My deepest respect and thanks go out to Queensrÿche, Fozzy, Tina and all of my friends who knew just how important this was to me. 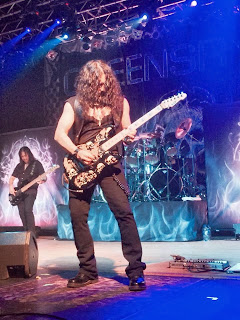 Rÿche on brothers and sisters.

The new chapter of Queensrÿche has begun and it’s going to be better than ever. 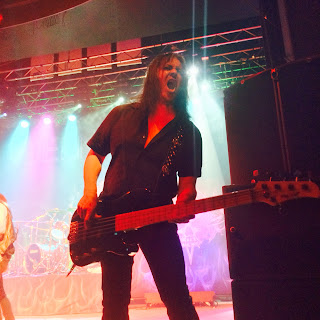 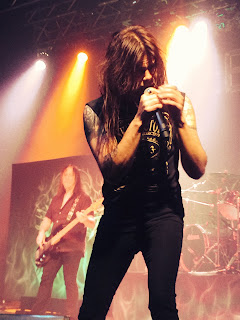 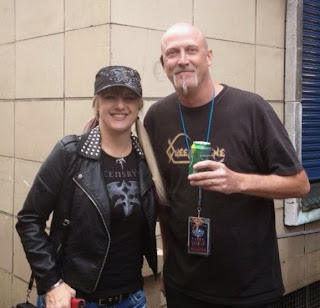 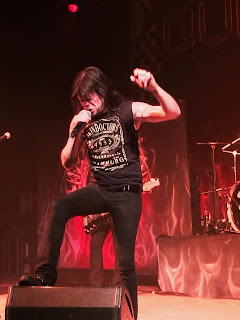 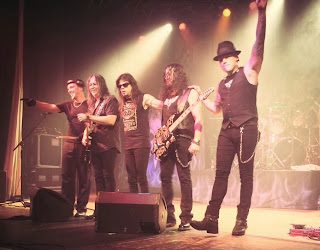 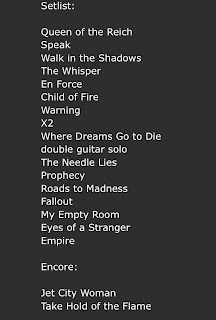