Redemption of My Soul in Rochester 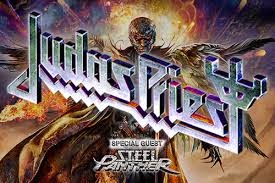 A Judas Priest fan through and through, the iconic British metal band is, of course, one of the elements of my full sleeve tattoo.  The tattoo depicts a 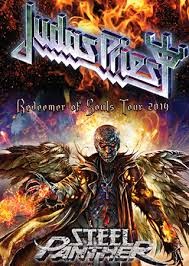 guitar case stickered with the logos of about 30 of my favorite bands.  Although not having seen “the Priest” live as many times as I would have liked, I am filled with determination to make up for that now before I lose the window of opportunity.  I was able to catch the previous two stops in Toronto, both shows were awesome and had their own merits.  Finding out that this new tour supporting the not too long ago issued Redeemer of Souls album (Redeemer of Souls Review) included special guests Steel Panther only served to add to the excitement.  Finding out that the tour would not be stopping in Toronto was near devastating, the closest venue (Casino Rama) being a place about two hours away and difficult to get to via public transport.  My good friend (and reviewer for another website) could also not make the Casino event and suggested Montreal, which eventually also turned out to be not in the cards.  Rochester popped up on the radar, only a three-hour drive away and a date that worked well for us both, we were “Hell Bent For Leather” once more.  I received excited text messages from him during the ticket purchasing, it seems to be all general admission he exclaimed!  Wow a general admission Judas Priest concert, doubtful we’d ever see that in Toronto!

We got “Heading Out To The Highway” in the afternoon and amazingly succeeded in getting a little lost on roads we were both familiar with, the evils of non-stop chatting about rock!  I remarked that even though I like the surprise of not knowing the setlist prior to the show I also cannot resist looking it up.  I couldn’t find anything for this event as it was the first show of the world tour.  We joked about a previous long drive venture to the US to see a concert on the initial performance of a tour (Motley Crue Show Review), one that did not go so well and hoped that we were not in for a repeat.  Arriving in Rochester we cruised by the venue, The Main Street Armory, which at first appeared that it could have been a church but in fact was more like a castle.  It was about an hour before the doors were set to open and we found there to be quite a few folks waiting.  After a horrible experience at a nearby Wendy’s we became successful in securing some “not too sketchy looking parking” and joined the now doubled in size line formed down the sidewalk out front.  Once inside, we instantly became like kids in a candy store upon seeing that it was, in fact, general admission with some seating on an upper balcony circumferencing the hall.  Not only was it general admission, but a surprisingly small arena, similar to Toronto’s Sound Academy for those who are familiar with that place.  Think high school gymnasium!  We had time to breeze by the awesome looking merchandise booth, peruse

the vantage points from the balcony and still secure positions two people back from the barrier at the front of the stage!  The phrase “We definitely have to hit more of these US venues” floated back and forth between us as we discussed the cheaper ticket pricing and much, much better seating availability based on our two experiences.  It wasn’t long before we ran into another rabid Priest fan and fellow Canuck who had made the journey from Ottawa for the occasion as well as everyone else around us, hey we’re friendly Canadians…lol.

Tickets were printed that doors opened at 6 and show at 7pm so by the time 7:15 hit everyone was starting to check their watches.  As we watched 7:30, 7;45 and 8pm pass, our phrase became “Perhaps no more first show dates for us”.  After we beat a dead horse with the “What are they Guns ‘n’ Roses?” jokes, we ourselves had become tired and claustrophobic in the steamy, sweaty gymnasium with a decided lack of air circulation.  The crowd was becoming increasingly hostile and were growing restless.  The colossal booing from the audience began around 8pm amidst chants of “let’s go”, “come on” and similar demands.  Around 8:15pm we could see bassist Lexxi Foxx and drummer Stix Zadinia milling around side stage, making no hurried effort to get going.  Methinks that Steel Panther will not be well received, a thought backed up by the huge deep booing that Stix received as he finally took up his stool behind the kit at 8:23pm.  Steel Panther quieted down the restless natives quite quickly

as they wasted no time in ripping into “Pussywhipped” followed closely by “Party Like Tomorrow’s the End of the World”.  Michael Starr (vocals), Satchel (guitar-formerly of Fight with Rob Halford), Lexxi Foxx (bass) and Styx Zadinia (drums) are something to behold if you haven’t already delved into the sensation that is Steel Panther.  The music is pure 80’s “hair band” (I’m not a fan of that term
, but it works) style material, but the lyrics are a little more sexually explicit, some may say crude.  With a Panther show, you also get some stand-up comedy as they banter back and forth with each other throwing insults at themselves and the crowd.  The jokes are quite funny, but they do get a little old

after seeing them a few times. They may not be exactly the same but basically the so, although this time they managed to fit in some quips regarding the late start.  All in all a rousing opening set by a fun and talented band that did a great job considering the frustration and hostility of the crowd with the near hour and a half late start.  Other selections in their hour-long stage appearance consisted of “Asian Hooker”, “Just Like Tiger Woods”, “Gold Digging Whore”, “Girl From Oklahoma” (which sounds a lot like Extreme’s “More Than Words” to me at the start), “Community Property”, “Eyes of a Panther”, “17 Girls in a Row”, “Death to All But Metal”, and “Party All Day (Fuck All Night)”.

The bitterness evaporated and the mood lifted, we chatted lightly as a colourful Judas Priest banner enveloped the stage while roadies were clearing away the Panther gear.  At 10:15pm the house music and lights dimmed in preparation for the main event.  “Dragonaut” from the July issued Redeemer of Souls album led the charge of the heavy metal machine known as Judas Priest.  Rob Halford (vocalist) set aside the cane that he had been using during the opening number and was surprisingly quite active around the stage during “Metal Gods”.  I decided to video (available soon on Decibel Geek YouTube) the next song, elated to hear the opening chords of “Devil’s Child”, a song I was hoping to hear tonight but not expecting.  “Victim of Changes”, a metal masterpiece, was delivered next complete with a bone chilling, piercing wail ala Rob Halford to complete the song.  As the audience was reeling from the obviously still strong vocal prowess of the Metal God himself the band greeted us with

another new song in “Halls of Valhalla“.  Halford with his intense facial expressions again absolutely nailed the scream near the beginning of that one as well, squashing any rumors that you may or may not have heard about his voice deteriorating.  Absolutely marvelous especially considering the man has breached 60 years of age!  “The Priest is Back”!  In all my tone deaf glory I sang along to “Love Bites” at the top of my lungs, apologies to those within earshot, and continued headbanging in time with “March of the Damned”.  We had heard chirping outside in line and in the auditorium about this Armory place being notorious for poor sound quality.  I’m happy to say that we did not find that at all.  Panther sounded quite good, but Priest was awesome, a perfect blend of Ian Hill’s thumping bass lines, the dual axe slinging attack of Glenn Tipton and Richie Faulkner all against a

backbeat served up by Scott Travis.  Mr Halford would leave the stage via a curtain at the side and change jackets for near every song and this time he appeared wearing a silver full length coat that must have been swelteringly hot up there.  He addressed the cheering crowd noting that the Rocka Rolla album had turned forty a couple of weeks back, so this tour was in celebration of forty years of Judas Priest.  Rob also gave a heartfelt thanks for the reaction to Redeemer of Souls and it’s reaching number six on Bilboard charts.  The album’s title track was served up now followed closely by the quintessential heavy metal ballad “Beyond the Realms of Death” as introduced by Halford.  Another surprise inclusion with “Jawbreaker” from their 1984 album, Defenders of the Faith fit in nicely ahead of “Breaking The Law“.  The revving of a motorcycle could be heard off stage as it roared for

several minutes before Halford rode in on the steel horse to signify the beginning of “Hell Bent For Leather”.  The band left the stage this time and you instinctively knew that it was time to call them back.  The chants, cheering and roar of the obviously pleased despite the wait to start crowd was deafeningly loud.  Halford returned to the stage leading the audience in some “Yeah, yeah, yeah’s”, a telltale sign of “You’ve Got Another Thing Comin'”‘s appearance.  The conclusion of the metal anthem, which included a Richie

Faulkner guitar solo again
saw the band exit the stage as we all screamed for another song.  Our pleas were answered in “Living After Midnight” followed by “Defenders of the Faith” to wrap up the performance.  “Defenders of the Faith” saw Ian Hill take up a rarely seen position at the front of the stage, normally relegating himself to the background.  The band tossed out pics and sticks before collecting center stage for a final bow.  Rob Halford lingered a few moments on stage behind his bandmates and lead the crowd in chanting “Judas Priest, Judas Priest”, walking off as we chanted.

(Buy: Steel Panther – All You Can Eat)