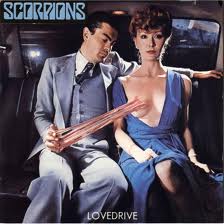 By the year 1979, Gerrman band the Scorpions were a somewhat established band. Their sixth album LoveDrive’ was released the same year.  By this time the band was pretty well known in the U.S and quite popular in Japan. The album featured many firsts.It was the first album without original lead guitar player Uli John Roth, who departed the band to start his own group. It was the first time Roth’s replacement, Matthias Jabs was introduced to the world, sorta. 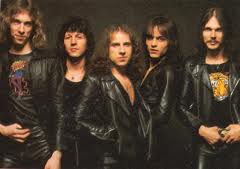 In order to understand the band history of lead guitar players, you first understand its members. Uli replaced Michael Schenker, Rudolph Schenker’s younger brother. Michael, an accomplished and talented guitar player also,had left to join another band.  Michael did record a few songs on ‘Lovedrive’ and can be heard playing lead on ‘Coast to Coast’ , ‘Another Piece of Meat’ and title track ‘Lovedrive’. When Uli left, he was replaced by Matthias Jabs. But soon Matthias found himself being replaced when Michael returned to re-join his brother and the band. As the story goes, there was times that Michael wouldn’t or just couldn’t perform, so they called Matthias to fill in. Eventually, Michael would give the guys a few hours notice that he was leaving, so they decided to keep Matthias permanently.

‘LoveDrive’ features several classics. The ballads ‘Holiday’ and ‘Always Somewhere’ are basic lessons for how to write a power ballad. ‘Coast to Coast’, probably one of the best instrumental songs made. It’s three part guitar harmonies are the best ever! The Schenker brothers, along with Jabs find a way to co exist and share the leads. Rudolph as usual, starts the rhythm off, and gets it started.

The album is full of motion and head banging from beginning to end. It’s also the start of the eventual CLASSIC line up. This album features  the classic known rough, yet polished sound the carried with them through the years. This album is a must for any Scorpions fan, and is a basic blue print of what was to come over the years. Late 70’s early to mid 80’s Scorpions albums are full of raw guitar energy and laced with bass and drums. Klaus and his edgy yet glossy powerhouse vocals tie the songs and albums together like newly wrapped presents. Yes, the early albums are that damn good.

The band would go on to make several more albums, all classics and must haves. The one thing that set the band apart however was their infamous album covers. Now, by today’s standards, the covers are sorta tame. ‘Lovedrive’ was no exception to the rule. the album featured a man and a woman sitting in the backseat of a car. Sounds innocent. The woman’s breast is exposed and stretched like bubble gum. Never the less, the album cover was banned, just like the rest of the bands covers.

The guys would even make history. They were apart of the Moscow Music Peace Festival back in the late 80’s, early 90’s.  They also returned back on their own to perform for the fans, making them the first western act to tour Russia. Lead singer  Klaus Meine performed at the now extinct Berlin Wall, along with Pink Floyd for the song ‘ The Wall’. The song ‘Wind of Change’ was the back drop theme song for the sweeping political changes throughout all of Communist Europe. They have toured just about everywhere.  Where ever there’s land, electricity, and people willing to rock out…its a sure bet the band will come. You can’t go anywhere and not know a song by them. Unless,  you’re a hermit and you live in the woods.

There have been some line up changes over the years. Bassist Frances Bucholz left the band, and a few months later drummer Herman(aka Herman the German) Rarabell left. But Klaus, Rudolph and Matthias moved ahead. A few faces came and went but eventually the guys went with James Kottak (Kingdom Come’s drummer, lead singer of  Kottak, was married to Tommy Lee’s sister) and Pawel Maciwoda on bass (and the youngest member of the band as well).

In 2010, on Fox News interviewed Klaus and Rudolph. It was announced that the band would be retiring. WTF!!! Fans around the world were in a state of shock, and disbelief. When the guys announced they would be going on tour in 2011-2012, fans bought what tickets they could or held daily prayer vigils for the guys to come to their city or town. I know, because I was one of those people. The closet they came to me was Illinois. Tickets went in less than a day. Heart broken. Everywhere else was either too expensive or just too far. I think I’m the only Scorpions fan that has not seen them play live. I’ve seen clips yes, but never heard them play live. In 2012, the Scorpions performed as a headline act at ‘Wacken Open Air Festival’ in Germany. Wacken is a yearly plane and metal festival, and this year the guys were headlining.

The band is still together, as to the retirement thing, Matthias said in an interview, that the band will continue on. There are plans to release an album of uncompleted songs the guys have been saving over the years. Not really new material, but it’s new if you haven’t heard it. It was just recently announced that the band was going to be in Russia doing some concerts with the Russian Symphony. Could this be another live recording and concert….ONE CAN ONLY HOPE. But until then, we have the classic, ‘LoveDrive’ to warm us on those cold winter nights.