Seventh Key still Survives in 2013 with "I Will Survive!" 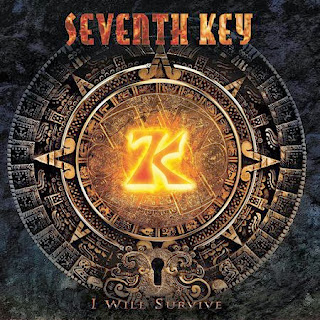 Seventh Key was formed in 2001 with Mike Slamer (guitars) of City Boy and Streets, and Billy Greer (bass and vocals) of Streets and Kansas.  They have now released 3 albums, 2001’s Seventh Key, 2004’s Raging Fire, and now, 2013’s I will Survive.  With a 9 year gap between the last 2 albums, I wasn’t sure they were still together but alas, here we have, the new album “I Will Survive”.  Mike Slamer is one of the great unknown session guitarists from the 80’s, playing on countless projects, most of which he was uncredited for.  It has been rumored that he did all the guitars on Warrant’s debut album, but it is only rumored.  If I ever get to meet him, that will be the first question I ask of him.   Billy Greer of course joined Kansas in 1986 with the return of vocalist Steve Walsh for the Power album, and has remained with the group every since.  Slamer and Greer first played together in the band Streets which was formed by Steve Walsh after his departure from Kansas in the early 80’s.  The put out 2 great albums that everyone must check out if you are a Kansas or Steve Walsh fan.

Now to the new album, “I Will Survive”.  The first track, “I Will Survive” starts off with a keyboard intro and guitar intro that at first made me think I was listening to a Dream Theater album.  Yes, I have listened to alot of Mike Slamers work, and he is just as great a guitar player as Petrucci.  If not better.  This album is straight up Melodic Rock, or AOR as some people still like to use from the early 80’s, at its finest.  With the next track, “Lay It On The Line”, it still keeps its upbeat melodic sound with a very heavy Kansas feel to it.  I’m talking 80’s Kansas, when I feel they put out their best stuff.  I recently read an interview with Greer and when someone mentioned the Kansas sound, he simple answered, “when you have been in a band for over 25 years, its hard not to be influenced by that sound”.  This album is full of great melodic musicianship, and progressive work.  The third track, “I See You There” is one of my favorites on the album at the time.  With a slow tempo leading into a loud gang vocal chorus, this is just an awesome song.

As a whole, this album is awesome.  If you love melody and that great 80’s sound, as I do, you will love this.  If you hate Kansas, don’t even attempt this album.  I am now going to use the Andrew McNeice technique of reviewing each track with simple and easy to read language and scores.