Mat Sinner is probably best known in North America as a founding member and the bassist for Primal Fear, but he is also a member of Alex Beyrodt’s Voodoo Circle, having just put forth their third effort More Than One Way Home, reviewed here by The Meister in May VOODOO CIRCLE. As well as those two outfits, the German native has been releasing great rock albums with his own namesake band, Sinner, since 1982. With a back catalog of 17 albums to date, it’s rather surprising that they are not a bigger name here. Especially with the quality of rock contained therein. I present SINNER – Touch of Sin 2.

Mat decided for this Sinner outing that the band would lock themselves in a studio for 30 days and re-record a selection of older songs from the early days of the back catalog as those albums are long out of print.  Sinner himself does not hold the rights to those recordings, a tragedy that seems to be the case with more than one musician.  I find it appalling that the artists who created the music do not even own their own works of art. But I guess that’s the nature of the beast for a young inexperienced, naive band hungry for their first record contract.

Sinner has included members of Helloween, Bonfire, Accept and future U.D.O. members over the years.  Deriving its title from the 1985 offering Touch of Sin, Touch of Sin 2 enlists the assistance of several special guests in the updating of these classic tracks, including David Readman, vocalist for Voodoo Circle.  Sinner and guests also include three new compositions here making for a solid rock album clocking in at over 45 minutes with 14 tracks, available on September 10th via AFM Records. 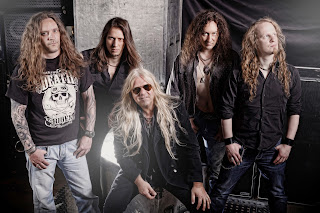 Tracks include the lead-off of “Born To Rock, “Bad Girl”, “Emerald”, “Shout” and “Masquerade” all originally appearing on 1985’s Touch of Sin. The album that originally saw Accept‘s Herman Frank on guitar before he was replaced by future U.D.O. guitarist Mathias Deith for the follow-up album. Today, Sinner is comprised of Mat Sinner standing front and center on vocals and bass guitar, while Andre Hilgers bashes the skins and the triple axe assault of Alex Scholpp, Christof Liem, and Alex Beyrodt, also of Voodoo Circle, doles out the riffage.  Not knowing what these tracks sounded like originally, I can tell you that the updated versions contained herein are total ass kickers making for a stellar album start to finish. Certainly enough to entice me to delve into their back catalog. And I recommend that you do the same.  As track #8, “Germany Rocks”, proclaims…….Germany does, in fact, rock \m/