Stand Up And Shout At The Rockpile 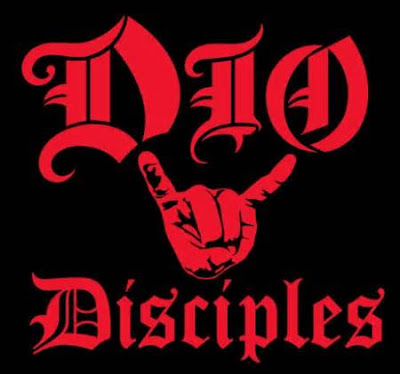 The Canadian Decibel Geeks were very excited when we received notification that the Dio Disciples would be stopping in Toronto at The Rockpile Bar and Nightclub during their current tour.  I (The Meister) had seen them not too long ago in March as they rocked the MSC Poesia aboard the Monsters of Rock Cruise, but this would be the first occasion for Wally and Kate and I knew that they would not be disappointed.

The Rockpile have done an incredible job of bringing in some bigger name acts to their relatively small venue and have done an awesome job of creating a local scene here.  The Rockpile is becoming a rock & roll destination, boasting such names as

Faster Pussycat (many times), Helix, Kill Devil Hill, Drum Wars, Jack Russell’s Great White, Stryper, Y&T, L.A. Guns, Dio Disciples, Brighton Rock and many more past and future.  In October they will be opening the doors on another Rockpile (Rockpile East) on the other side of the city.  Together with Black Moon Entertainment they presented tonight’s show with The Dio Disciples, who took the Rockpile by storm.

ROCKPILE on FACEBOOK     ROCKPILE WEBSITE     BLACK MOON on FACEBOOK
The festivities began around 8pm as One Divided took charge of the stage.  Their music was riff heavy and high energy with the bassist in constant motion.  The smoke machines billowed out their cloudy product as they tore through a rousing version of Pink Floyd’s Another Brick In The Wall, which seemed to be the highlight of their six song set of original material.
Amidst rumours that Stryper (playing here tomorrow night) may be in the house to catch their fellow Monsters of Rock alumni the next band, Ungrateful Children, was ready to start.  The music was very heavy and I was loving it, but I visibly blanched when the vocals kicked in.  By the end of the first song the singer’s face was totally red and the veins popping out all over his neck from the screaming and inaudible noise that escaped his throat.  During the second song Kate leaned over and showed me the memo pad on her phone containing her contribution to the review.  It simply said “yikes”.  During a break from the screaming noise, the singer (screamer) complained about getting old as he just turned 32.  “That’s younger than everyone else in the bar!” came the response from the crowd…..ah, I can always count on my friends to sum it up perfectly.  Avoid this band at all costs. 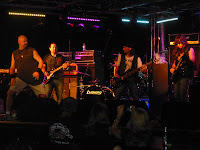 We were now a little afraid of what the next band would sound like and we waited with baited breath as Muffin took the stage.  What a pleasant surprise as they opened with Judas Priest’s Electric Eye.  Their energetic stage presence and excellent cover versions began to draw a crowd down in front of the stage, perhaps they were just thankful that the screaming guy was finished.  We were treated to a set that included Metallica, Megadeth, Iron Maiden and Motorhead that sounded a lot like it could be one of my MP3 playlists.  The guy could actually sing and 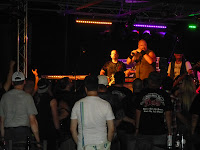 the whole band was doing a great job with these classic cuts.  Muffin closed out their set with another Priest composition in Victim of Changes and we were shocked to see how dense the throng at the front of the stage was and all the fists pumping in the air, looking more like the audience of a headlining band than an opener.  Muffin were a great act, not to be fooled by the oxymoron of their name and in retrospect I wish that we had taken up residence at stage front for them.  Check them out if you can.
MUFFIN’s FACEBOOK GROUP 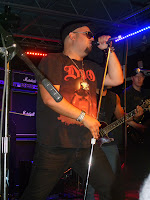 Wally and I now moved to our “usual positions” at the front of the stage.  I still think that The Rockpile should put up a couple of reserved signs for us as we are always in the same spot and if you look at most of the videos taken of Rockpile shows, you can usually see our bald heads bopping along just to the left side of centre.  Vegas was the next act and they had a hard time following Muffin.  The singer was adorned in a Dio t-shirt as he stomped energetically around the stage delivering harmonic vocals to the heavy sound.  I noticed that the crowd had thinned out down here and was no where near the draw that the previous band had achieved.  Their all original set was broken up with one cover song in the form of KISS’ Detroit Rock City and the singer actually did a fair Paul Stanley impression, sounding awesome.  They finished out their set and while were not as exciting in my opinion as Muffin they did a decent job and I would like to catch them again sometime. 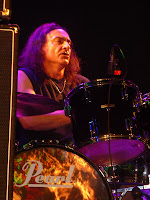 Dio Disciples were due up next as Wally held the spot, “Be big”, while I refuelled our octane beverages.  For those that don’t know what The Dio Disciples are all about, it’s not just a Dio cover band.  This band is comprised of Ronnie James Dio’s last band members at the time of his death in 2010 and some of his closest friends paying a tribute to him, his life and his music all the while raising money for the Stand Up & Shout Cancer Fund.  The band features Craig Goldy on guitar who has appeared on such Dio recordings as Dream Evil, Magica and Master of the Moon.  Bjorn Englen on bass formerly of Yngwie Malmsteen’s band, keyboardist 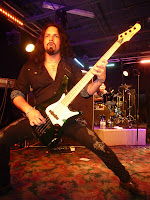 Scott Warren (Angry Machines, Magica, Killing The Dragon, Master of the Moon) and Simon Wright (Lock Up The Wolves, Magica, Killing The Dragon, Master of the Moon).  Oni Logan (Lynch Mob) and Tim “The Ripper” Owens (Judas Priest/Yngwie Malmsteen) share the vocal duties in place of the legend himself.  This show tonight was made even more special by the absence of Simon Wright as we saw original Dio drummer Vinny Appice sitting in behind the kit.  Vinny may soon start to call The Rockpile home as this is his third appearance here recently with Kill Devil Hill and Appice’s Drum Wars. 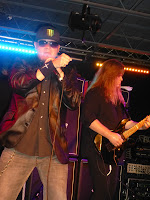 The band entered to the raucous cheers of the audience and as Vinny got himself situated behind the kit he looked at me and smiled, maybe recognising me or Wally or just noticing my Kill Devil Hill shirt.  Tim “The Ripper” Owens bounded out blasting through Stand Up And Shout from the absolute classic heavy metal album Holy Diver, the title track to which followed closely behind.  When I saw Dio Disciples on the Monsters of Rock Cruise Tim was unable to make it and Mark Boals stood in doing an awesome job there, but Tim was absolutely shining tonight, sounding great.  Representing Ronnie James Dio’s tenure at the helm of Black Sabbath came Neon Knights as the next choice, after which Tim introduced Oni and passed off the microphone for him to lead us through Egypt 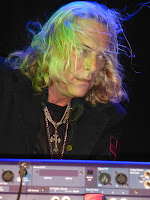 (The Chains Are On).  Ripper rejoined for Stagazer from 1976 and the band Rainbow.  Oni Logan, singer of George Lynch’s Lynch Mob (when they’re not in a dispute), began The Last In Line with Ripper taking over after the first verse.  The King Of Rock & Roll saw both vocalists performing in a duet which came off amazingly well.  During Don’t Talk To Strangers Tim “The Ripper” Owens came to our side of the stage and touched the head of a young kid standing next to us.  I thought the kid was gonna wet his pants afterwards as he and his friends danced around gleefully shouting “Ripper touched my head”.  It’s nice to see that not all of today’s youth are embroiled in radio friendly pop music.  Oni joined the stage again as All The 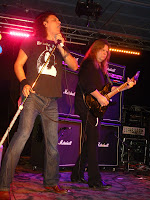 Fools Sailed Away from the Dream Evil record saw another duet performance.  Oni remained in control of the mike for another Dream Evil cut with Sunset Superman and I was pleased to hear these more obscure selections.  Oni next took us through Catch The Rainbow with Ripper joining in for harmony and them both teaming up again on Straight Through The Heart.  Bassist Bjorn Englen tossed Wally a guitar pick as two Rainbow tracks followed in Long Live Rock N’ Roll and Man On The Silver Mountain, the latter inspiring a sing-along chorus from the audience.  Ripper, with a Monster beverage “M” tattoo on his inner wrist then took us through Black Sabbath’s Heaven & Hell to complete the regular set. 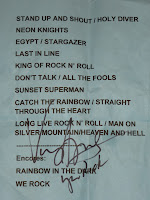 The encore consisted of the absolute classics Rainbow In The Dark and We Rock, both of which had the crowd singing and chanting along, fists raised high in the air or displaying the “horns” (which is widely credited as being popularised by Ronnie).  I could feel the sizzling energy ripple through the crowd as we were taken on a magical ride tonight through the music of the late, great Ronnie James Dio by some of his closest friends and band mates.  I myself have never had the pleasure of seeing Dio perform live, but this must be the next best thing and I’m soooo looking forward to seeing them again as they have been added to 2014’s Monsters Of Rock Cruise.  I’ve included two fan filmed videos from the Rockpile show that I found on you-tube below.