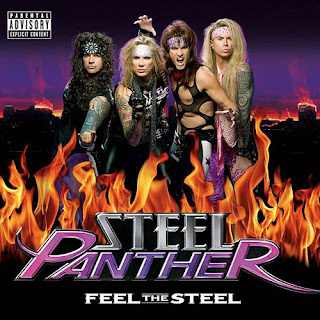 It was around 2007 when I first heard the quartet that would later go by Steel Panther. At seventeen, admittedly, I was still pretty wet around the ears when it came to heavy music. Fortunately, myspace had provided an unprecedented way for young broke guys and gals to directly connect with bands.
As strange as it sounds, I have a bit of nostalgia for what was only half a decade ago. Myspace gave the chance for every band to have a unique online presence easily, with every page having its own layout and flavour. Realistically, this freedom for the users was perhaps eventually its downfall (Facebook chews up a lot less data), but for a time, it gave a lot of the bands, including the then-named Metal Skool, plenty of freedom with getting their name out there on their own terms.
The music of Metal Skool instantly clicked with me. It was loud, obnoxious, heavy and coated in hairspray. As a big fan of hair metal, I got the joke straight away. These were real musicians who could play damn well, but these were characters – a modern day Spinal Tap. With blog posts about Michael Starr’s sister’s boobs, and Lexxi Foxx talking about soap causing STIs, I wondered how anyone could miss the joke, but that is just what seems to have happened.
Admittedly, Steel Panther sounds a bit more like a “real” band name than Metal Skool, and international touring and a couple of records under their belt have perhaps given the band a bit more legitimacy. But I mean, come on – don’t the lyrics say it all?
The other side of the fence, however, is people writing the band off for the fact they are humorous. The lyrics they sing and the characters they play are obviously parodying the excess of 80s pop metal, but behind that you have musicians who have earned their stripes in the metal world (Satchel’s alter-ego playing alongside Halford in Fight) and the music itself, whilst not life changing, is a hell of a lot of fun, and stands up alongside the more serious of retro bands.
One thing it is perhaps easy to overlook is that the difference between Russ Parish becoming Satchel isn’t that far removed from Vincent Furnier becoming Alice Cooper. When Chaim Witz renamed himself Gene Simmons and loomed onto talk shows in full war paint and armour, then answered – to the question “are you a bat?” – “No, I am evil incarnate.” was he not playing a part? Perhaps not for laughs, but wasn’t he taking on a role? Truly, Steel Panther is only a few more steps removed from the stage personas that fill the genre of hard rock/heavy metal, and then it isn’t much further until we get end up in the realm of Spinal Tap or Dethklok.
Don’t get me wrong, I’m not saying they are one in the same. Steel Panther, jokes or not, are a band of hard working, talented musicians. 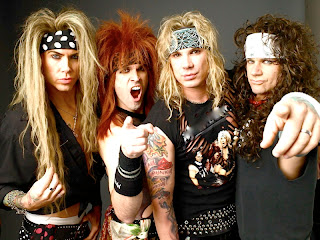 Whilst stylistically not as focused as its successor, Panther’s debut record stands up as slab of good-time, rockin’ metal tunes. What this album does that Balls Out doesn’t is treat each song, it seems, as a parody of a different band or scene. Hells on Fire absolutely reeks of Accept’s crunchy guitar tone, and Fat Girl would be just as convincing with Coverdale on vocals. Like any self-disrespecting glam record, there’s a power ballad or two thrown in, and Community Property boarders on lyrical genius, Steel Panther surpassing many of the cheesy bands they are parodying in terms of wit. This perhaps isn’t across the board, however, as Death To All But Metalis nothing but an over-the-top, ridiculous battle cry for all things heavy, and I for one love it.
At the end of the day, there are often bands you can laugh with, or bands you can headbang to, it is pretty rare that you find a band that can do both. Sometimes you wanna listen to something ridiculous, but sometimes you just want to put on some damn good metal and have some beers with your friends – with a band like Panther, you can do both.
If you are yet to feel the studded-codpiece that is Steel Panther gyrating awkwardly against your face, either of their two records will do fine to introduce you to the awesomely ridiculous, ridiculously awesome stylings of the four piece. Death To All But Metal!