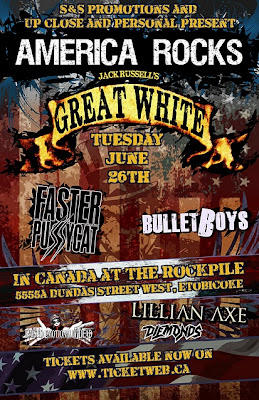 There’s a whole lotta metal out on the road this summer, entitled the “America Rocks Tour”. Jack Russell’s Great White has hit the road along with Faster Pussycat, the Bullet Boys, Lillian Axe and for the Toronto show added a couple of local acts R.E.D. (Raised Emotionally Dead) and Diemonds. A total dream come true for any self respecting eighties metalhead. 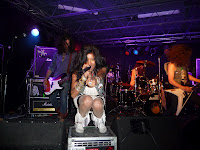 The show got underway just after 7pm with local act Diemonds taking the stage first. Toronto based Diemonds are living proof that there is hope for a new generation of rockers who want to hear loud, aggressive melodic metal. A high energy, take no prisoners attitude this band can share the stage with the big boys any day of the week. 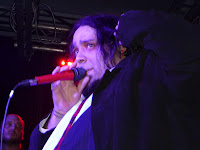 R.E.D. (Raised Emotionally Dead) are a band that needs to be seen live. The uniform look of the black/red gives this band calling card to be remembered but the real deal is the music they create. Heavy as hell with some great hooks, these guys are a blast to watch live. A blown amp head couldn’t even slow them down as a replacement Marshall was added mid-song as the band played on. Check them out 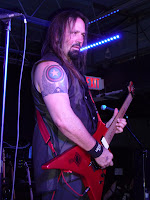 Lillian Axe, to be honest was a band that I kinda missed out on during the eighties. I am really not sure why they didn’t hit my radar but I don’t remember much about them in the eighties. Wow did I miss the boat! These guys came out like they were on a mission. A totally entertaining set, the guitar duo of Steve Blaze and Sam Poitevent led a metal assault of epic proportions. I will be heading home to add some Lillian Axe to my music collection. 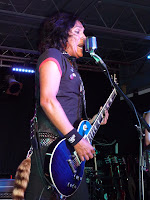 Next up, the Bullet Boys took to the stage and delivered a rocking little set including such hits as “For the Love of Money”, “Kissin Kitty”, “Hard as Rock” and of course “Smooth Up in Ya”. Marq Torien sounds as sharp as ever and the guy knows his way around a fretboard as well. A band I never got to see live back in the day, but they were worth the wait. 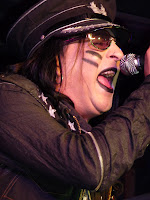 Faster Pussycat could almost become the houseband at the Rockpile, having played here three times in under a year. In fact Taime quoted “I see you guys more than I see my mama”. Always a crowd pleaser they ripped through “Slip of the Tongue”, “Cathouse”, the Betty Blowtorth cover of “Shut up and Fuck”, a really cool version of “House of Pain”, and the classic “Bathroom Wall” which led into bassist Danny Nordahl taking over the mic for “Pretty Fucked Up”. All in all, Faster Pussycat delivered the goods on a hot night in Toronto.

Finally after five hours of metal came the man of the hour, the legendary Captain Jack Russell and his Great White hit the stage just after midnight. Now Jack Russell has certainly had his share of ups and downs but tonight he proved to all that he is back. The band he brought along have everything under control. Jack’s new crew consists of Guitarist Robby Lochner, Guitarist Matthew Johnson, Bassist Dario Seixas and Drummer Derrick Pontier and these guys are ready to sail the high seas with their Captain. “Rock Me”, “Save Your Love”, “Shake It” and a beautiful “Dessert Moon” all never sounded so good. Jack announced a romantic love ballad as they kicked into “On Your Knees” and the not to be forgotten “Once Bitten Twice Shy” was a killer sing-along finale. Jack’s vocals were as strong as ever.

Be sure to check out the America Rocks Tour if they sail into port near you.