The Big Truck Keeps On Rollin'

Share on facebook
Facebook
Share on twitter
Twitter
Share on linkedin
LinkedIn
Share on whatsapp
WhatsApp
Share on telegram
Telegram
Share on email
Email
Share on print
Print
MEISTER MUSIC #1 – TRUCKER DIABLO
Hello and welcome to my new segment called Meister Music.  I often get new music cross my desk from record companies or from my own personal musical searches and adventures.  I thought that this would be a good place to review and post my thoughts on some of this music, maybe turning you onto some new bands or reminding you about some old favourites.  Some of the albums may not always be to my specific taste in music, but I’ll give you my honest opinions.  Some of it may not even be the most current as I try to introduce you to some lesser known bands that have crossed my path and become favourites of my listening rotation.  Please feel free to leave me comments and suggestions as you see fit, it would be great to start a discussion of some of these albums. 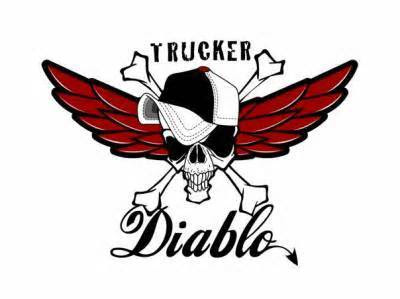 For my first venture with Meister Music I thought I’d begin with something new that I just discovered.  I had never heard of this band and just blindly spun the album from a download that I’d received.  I was hooked almost immediately less than half way through the first song and being a 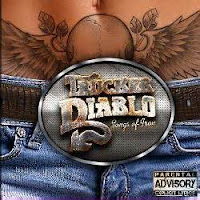 supporter of music, I have now pre-ordered the actual CD due out May 14th, 2013!  Usually when I’m listening to music at home, I have it on as I’m writing or doing something around the house, so it doesn’t always get my full attention.  The way this grabbed me, all else ground to a halt as I got into the song and started to tap on my desk.  The album I was listening to based on a random clicking out of the five new recordings that I had recently received was Trucker Diablo’s Songs Of Iron and if you’ve not heard of these boys previously, pay attention, you’ll thank me later!  The first track was called Red Light On and as I said, it hooked me right away.  Starting with a little guitar riff and then pounding in with the rhythm section driving the beat, this is the kind of thundering anthem track that forces your fist in the air!  This is just the kind of rock that I love, dirty, gritty straight up working man’s tunes reminding me of bands like American Dog, Rhino Bucket and especially Planet 9.
I immediately popped onto the internet as I was groovin’ to their beat and searched out some info on this Trucker Diablo band that I’d never heard of until now.  This statement appeared on their website and also the Facebook page “Heavy melodies firmly planted on a foundation of steamroller 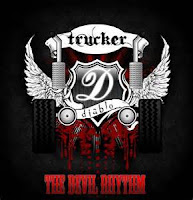 rock n’ roll aggression is the fuel behind the latest offering from Northern Ireland export, Trucker Diablo. Songs of Iron picks up where the breakthrough hit album, The Devil Rhythm left off, blasting listeners with the sonic fury of modern heavy rock mixed with a road worn southern swagger. After releasing two viral videos (“Drink Beer, Destroy,” and “Voodoo“) taking the stage at Hard Rock Hell, Download, and opening for The Foo Fighters amongst others, Trucker Diablo surged to new heights of popularity in 2012. Now 2013 finds the band upon their international acclaim by cranking out another set of pile driving melodic rockers. Songs of Iron, ups the ante on heaviness, crunching guitars and sing-along chorus, and is sure to please Trucker fans the world over, new and old.”  Wow….sounds to me like I should have heard of these guys before, but no matter I’m on board now!

The second cut, Year Of The Truck starts out with furious crunchy guitars and by the time I’d ripped through it and The Rebel I’d learned that the band consisted of Tom Harte on guitar and vocals, Simon Haddock also on guitar and vocals, Glenn Harrison on Bass guitar and Terry Crawford rounding out the line-up behind the kit.  The boys started Trucker Diablo in 2008 in Northern Ireland and have cited influences by the likes of Creedence Clearwater Revival  AC/DC, Metallica, Anthrax, Canadians Annihilator and Thin Lizzy, whose current vocalist is Ricky Warwick formerly of The Almighty another awesome Irish band.  They played the prestigious Download festival in 2011, had a song on Rock Band 3 for Xbox.  Played Hammerfest and the Hard Rock Hell festival in 2012 and supported both Thin Lizzy and The Foo Fighters.
Drive has a more commercial sound to it and I could easily hear it on rock radio stations, but it still manages to maintain the attitude and edginess of the band.  Not So Superstar comes back with a kick in the teeth and spits venom everywhere grinding through the track just might have your middle finger raised high in the air saying “Fuck the road” along with the chanting chorus at the end of the track.  The Streets Run Red groove along with a cool bass line driving the song forward.  Lie To Me starts off with a catchy, hooky little riff and has a sing along chorus.  I’m not a ballad guy, but the slower pace of Maybe You’re The One was a nice change from the asskicking assault of the first half of the record and once the chorus sets in the track does justice to the band’s sound once again with a great little guitar solo, something not often found in today’s newer songs. 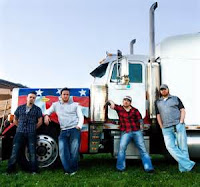 Bulldozer offers just what the title of the track suggests.  Right from the opening seconds prompting your hand to the volume control of your speakers, turning it steadily up and maybe even getting you out of your chair, jumping around the room air drumming and air guitaring, banging your head or maybe that’s just the effect it had on me anyway!  From Bulldozer we move into Rock Hallelujah, a bit more melodic of a track and has radio single written all over it while still containing some great riffs.
Track #11 was titled Highway Radio and it’s southern flavour maintains the pace of the record, where as some others may tend to lose steam by this point.

I was expecting another slower ballad style of cut from When’s It Gonna Rain?, maybe thinking too much of Little Caesar’s I Wish It Would Rain, but it is another up-tempo rocker.  Shame On You is full of piss and vinegar and the beat is guaranteed to have you out of your seat and dancing.  The album closes out with I Wanna Party With You and once it’s over, you can’t help but give your ringing ears a second to rest before starting the ride all over again!

With a whopping 14 tracks, this album is nothing like most that are issued these days and only two of those tracks are under four minutes, clocking the whole ensemble in at over an hour running time!  Their website mentions a 2013 tour in the U.S. and I certainly hope they manage to squeak out a show in Toronto Canada as well! 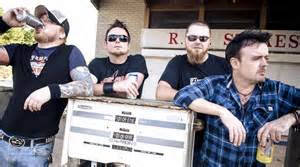 Songs Of Iron is set for release on May 14th in the U.S and Canada.  You can pre-order the CD through this link: TRUCKER DIABLO-SONGS OF IRON.  Do what you have to to get this CD, save your pennies, borrow the cash from your parents or even skip your mortgage payment if needs be, but please don’t steal it!  You’ll thank me later.

Trucker Diablo’s catch phrase is “the Big Truck keeps on rolling” and I say either get on board or get out of the way ’cause this ain’t slowin’ down for nothin’.

I was very excited to receive Armored Saint’s Punching The Sky in the mail a full 4 days before the release date. The outside

As we’re all living through the pandemic, Tyler Bryant & The Shakedown crank it up on their latest, Pressure, to let you