The Big Truck Rolls On: A Review of Trucker Diablo’s Rise Above The Noise

Trucker Diablo is a straight up, no frills hard rock band out of Northern Ireland whose Songs Of Iron CD from 2013 made The Meister’s best albums list of that year. The Songs Of Iron album is loaded with fist pumping, thunderous rock anthems with songs such as “Red Light On”, “Drive” and “Not So Superstar” that are still fairly regular listens for me. Here’s a link to The Meister’s review of Songs Of Iron: The Big Truck Keeps On Rolling 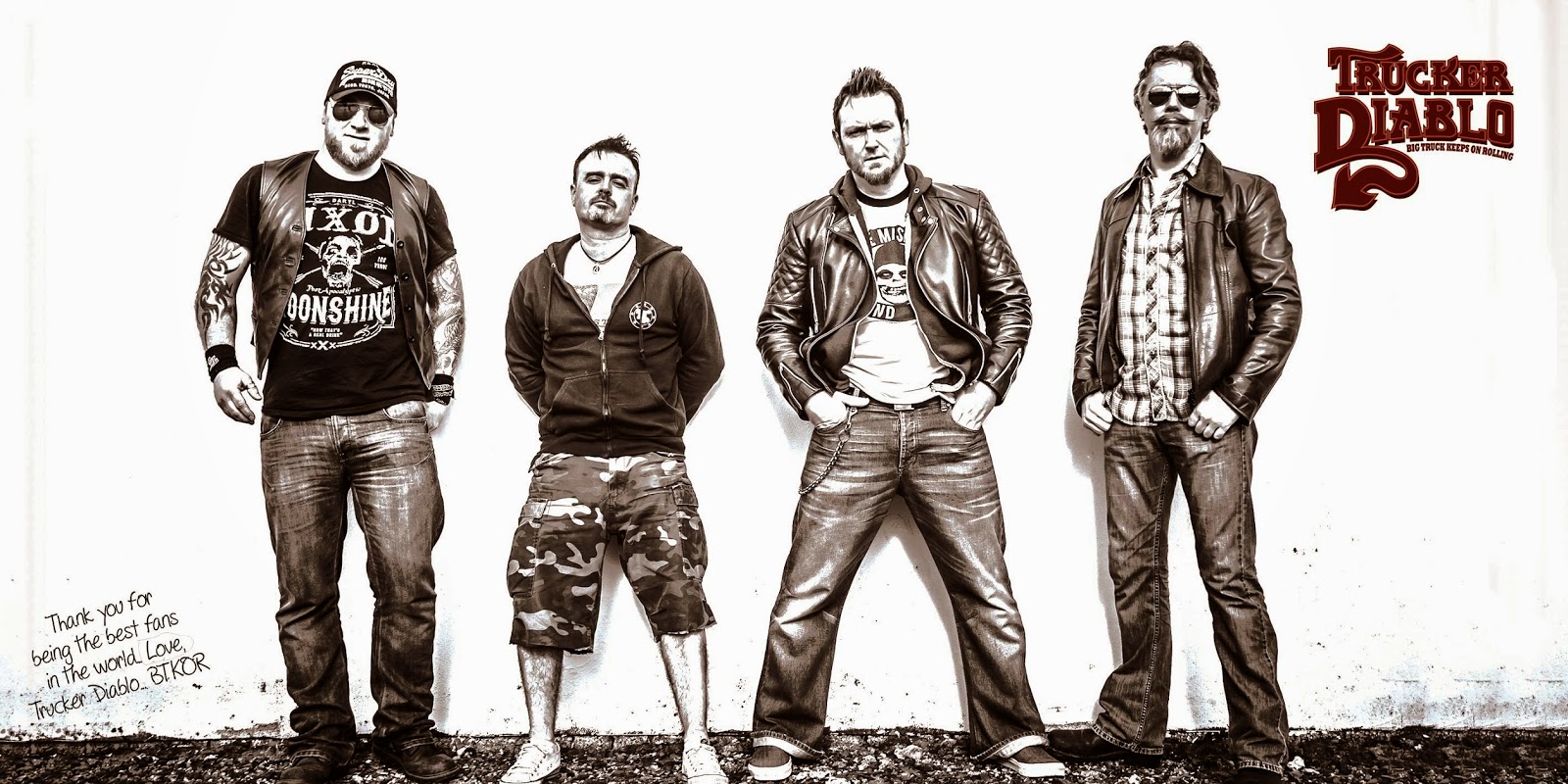 Trucker Diablo are made up of Tom Harte and Simon Haddock both on guitar and vocals, Terry Crawford behind the kit and newcomer Jim McGurk taking over bass duties from Glenn Harrison. The boys started Trucker Diablo in 2008 in Northern Ireland and have cited influences such as C.C.R., AC/DC, Metallica, Anthrax, Annihilator and Thin Lizzy.

Well, I’m excited to say that the boys are back in town again with a new album titled Rise Above The Noise almost a full year after they announced an indefinite hiatus. According to the press release “Rise Above The Noise was funded by a very successful pledge campaign, and features 10 songs mostly written during the downtime of the last 12 months, sees the band expand their songwriting, monster up their riffs and pull out those big choruses that made their peers like Ricky Warwick, Cormac Neeson and Ginger Wildheart take notice!” Sounds great to me! Let’s give ‘er a spin! 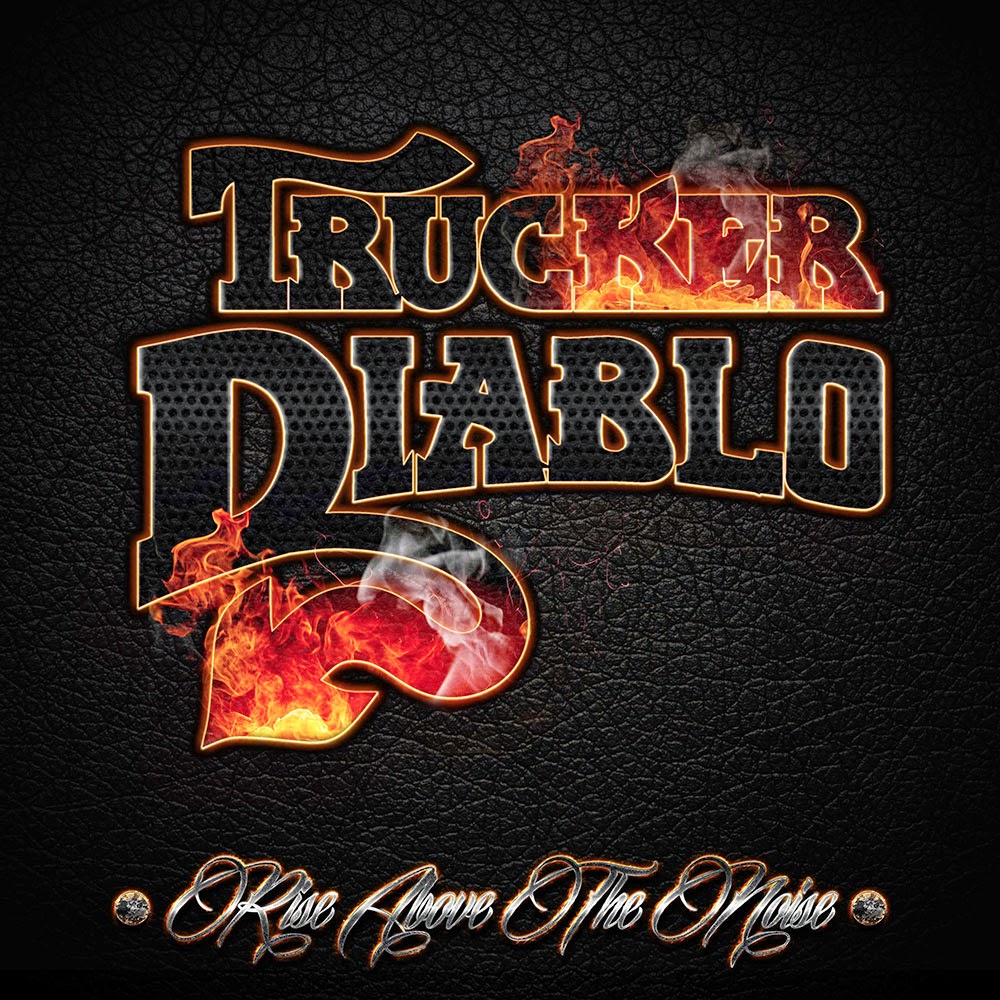 I suspect that my track listing could be a little off here as there seems to be conflicting numbers assigned to the MP3 download files that the band was kind enough to forward to me for the purpose of this review, but I’ll go through in the order that they play in for me. “Fight Life” gets things rolling with exactly what I expected on this third Trucker Diablo outing with it’s almost angry riff leading the charge and melding into the melodic chorus. Friggin’ great tune and start to this new offering! “Don’t Cry” is a ballad, which anyone reading my reviews knows is a style that I’m not particularly a fan of, and plays in the number two spot for me but is also labeled #3 and #10. For my particular tastes, I would say that this one is better served as the album’s closer, which it appears to be in some online searches. “Party Like They Started The End Of The World” reads #9 and also #2 (getting confusing, eh?) and is more of the hard pumping anthem rock that Trucker Diablo does so well. “Somebody Save Me” is a slower style fare, something that I could definitely hear on rock radio (if there is even such a thing anymore). “We Stand Strong” starts out pounding, never lets up and has already graduated to the MP3 player. Fists in the air kids, this is solid rock n’ roll! The tender piano (supplied by The Quireboys‘ Keith Weir) of “Where Angels Fly” starts this ballad off before the rest of the band jumps in. Again this song is well written and executed, but I just personally have trouble digging the ballad fare. Things kick up several notches with the Thin Lizzy-ish “Girl In A Photograph” and its amazing solo. “Girl In A Photograph” is probably the winner of the top accolade award for Rise Above The Noise and joins its brethren in MP3-land. The grinding, southern swamp-bluesy feel to “Take Me To The River” adds another dimension to the album with it’s low-end while the hooks and sing-along chorus vocals contained in the interestingly titled “Murder Ballad” are able to maintain my interest, but “Sun Deprives The Day” simply shines all around.

Trucker Diablo have definitely added another dimension to their repertoire here expanding on the slower-paced ballad compositions, a little too much so for my particular fancy, but overall a very satisfying record. Will this one make the cut for best of 2015 list as Songs Of Iron did in 2013?

Something tells me these guys kick some ass and leave it all on the stage in concert! Expect to see Trucker Diablo out on the road as they’ve already announced appearances at three big UK festivals, now if we could just get them over here in North America!