The Story Of The Countdown Photo With The 80's Invasion Tour

Any of you visiting the Decibel Geek website and listening to the podcast Episode #88-Monsters of Rock Cruise Memories
will already know full well that I’m a big proponent of the Monsters of Rock Cruise that takes place for the third instalment in March 2014.  The excitement for me of this third voyage is already unmanageable and my co-workers are already sick of hearing the word “cruise” from out of my mouth and there’s still well over 200 days to go!!

Well, being the brilliant genius mind that I am, I developed an idea.  Now sometimes I should mention that my ideas tend to get me into trouble from the little things (missing Coney Hatch lyric sheets heard about here: Episode #59-Hostile Hoser Hijack) to the big things (near getting fired for my trip to Sweden Rock Festival), but this one seemed harmless enough and I never learn anyway!  You see, on the Monsters of Rock Facebook page each day prior to cruising time they post a “countdown shot” usually consisting of cruisers and a band who has been or will be aboard.  Sometimes some other creative geniuses comes up with a non band related countdown shot, that’s beyond my expertise but 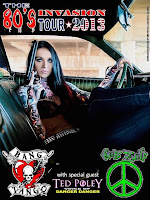 all the photos depict the number of days left until we set sail, hence the countdown.  I collected the few fellow Canadian (all Toronto except one) cruisers that I knew personally, knowing full well that each one also knew more folks and I started a Facebook group inviting them to add anyone that they knew who was cruising.  I suggested that since most of us attend the The Rockpile Bar & Nightclub on a regular basis, with the awesome line up of bands that they get in there creating quite the rock scene in Toronto, that we should all get together for a countdown shot.  The suggestion was well met and before I knew it there were 24 of us and I was having shirts made for everyone for the event of our excellent photo.  We decided to take the shot on August 17th when the 80’s Invasion Tour with Bang Tango, Ted Poley and Enuff Z’ Nuff, all cruise alumni, rolled into Toronto. 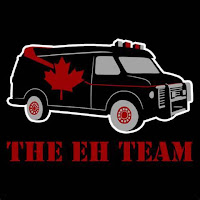 The shirts arrived. looking amazing and I chucked them into a big bag, hauling them by public transit from Newmarket down to The Rockpile, feeling a little like Santa Claus.  I hoped that these people, many of whom I’d never met would actually show up and stick to their commitment and pay for the shirts that they’d ordered.  If not I would be stuck as the owner of a variety of different size t-shirts, but I was pretty sure that I’d not be getting any use out of the ladies tank tops!  With the bands all on board to participate in the photo, contacted through some of the members of this newly formed “EH” Team, the excitement level was high and running wild through us all as we met, chatted, drank and watched the opening band.  Everyone did indeed arrive and claim their shirt and we also gathered another six or so folks who were cruisers past and present, wanting in on the action as well.  I don’t know who’s artwork this is, but they’re getting some free advertising from our group now as we have adopted it for our cruise shirts.

The 80’s Invasion Tour’s stop in Toronto was not without issues however, as two members of Bang Tango, singer Joe Leste and drummer Timmy Russell were casualties of the Canadian Border patrol and failed to gain entry to The Great White North even though they were just here back in April.  As a result Bang Tango would not be performing this evening.  Scott Laflame and Lance Eric from Bang Tango did however make it across which was a good sign as Lance was also handling bass duties with Ted Poley.  When it came time for Ted to take the stage however another issue became apparent…..Timmy Russell had been drumming for Ted!  With a “show must go on” approach Ted, Lance and guitarist Maz Mazza played without a drummer.  They opened up with “Monkey Business” (during which on the cruise he is known to toss out bananas into the crowd, but not tonight it seemed) and wow, his voice is strong and clear as it has been every time I’ve seen him perform.  Ted felt bad that he didn’t have his drummer with him, so he asked us to bear with them as they changed up the setlist a little and he enlisted the help of Enuff Z’ Nuff drummer Randi Scott for the next couple of tracks, one of which was “Don’t Walk Away”.  During this number in a great display of showmanship as Ted always exhibits, he left the stage to wander through the crowd, having a lot of fun with us, shaking hands and singing personally to some.  He took up a chair with the kids from the opening band and stole a few fries off of one of their plates all the while never missing a note in the song.  The kids looked on in total confusion, probably not having any clue who he was.  Ted was quite funny and had a good rapport, giving a personal experience to almost everyone in the audience.  But what happened next was absolute magic.  Randi stepped down and

Ted himself took a seat behind the kit.  I had no idea that he had started out as a drummer before moving to the forefront.  The real thing tonight was that Ted had a broken wrist, but he would not let that stop us from getting a great rock show.  He drummed for a triple shot of Danger Danger classics “I Still Think About You”, “Bang, Bang” and the hit of “Naughty Naughty”.  Ted had warned us that with his taped up wrist and lack of drum practice he would “F**k” these up, but no-one in the crowd noticed or cared.  The seven songs that The Ted Poley Band brought to us that night were pure magic and a true testament to the phrase “the show must go on”.  I really need to see Danger Danger live one of these days, but I expect that one will involve some travelling to achieve.

By the time that Enuff Z’Nuff took to the stage I was well on my way in
the beverage category and chatting with so many new friends that my attention wandered.  Although I’ve tried many, many times, seen them live on the cruise and at the cruise pre-party I just can’t seem to catch the real buzz of these guys.  I did notice that they were playing as a three piece (usually a four man band) so I assume that there was yet another casualty of the Canadian border patrol.  The highlight of their set for sure was a medley of covers during which they played 38 Special, Bryan Adams, The Cars, Journey and Rush. 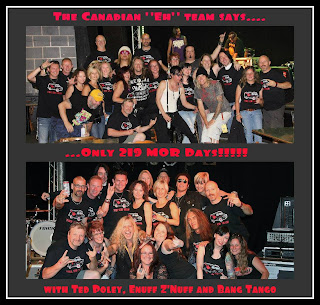 After Enuff Z’ Nuff’s set we all were milling around waiting for the bands to autograph and pose for pictures with their fans, some of our group included in that.  Then all of a sudden, without warning, Ted and Maz appeared at our side saying “Let’s do this photo on the stage”.  Some of us fled with them to the stage while I wheeled about searching for anyone from our group, not wanting anyone to miss out.  Thank God we had the time to take three of four photos as I missed the first couple, but even worse for some of our group who were out on the patio smoking or in the washroom as they missed the shot all together.  Then about fifteen minutes later, Enuff Z’ Nuff wanted to do a countdown shot and so we assembled again in front of the stage this time.  Unfortunately we were still short some of our group who had been in the Ted photo, but we gained the folks missing from the first picture.  So between both shots we seem to have all of the “EH” Team and most of the three bands.  A little photo shopping by one of our group and we were ready to post our “countdown shot”.  Only 219 days until the cruise, but it seems like it is forever and I don’t know if I can wait that long!