This MONSTER has TEETH! 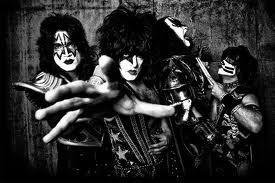 October 9th, 2012 and KISS have uncaged “MONSTER”, their 20th studio album. I am here to tell you that this Monster has Teeth!

Now I will admit to you that I am indeed a complete and unabashed KISS Geek. Live, this band has no rival. They completely wrote the book on delivering the biggest spectacle in rock. That said, it has been many, many years since I have been actually excited to get to a record store on release day to get a copy of any album.

When Kiss delivered the high octane single “Hell or Hallelujah” a couple months back, I have to say I was more than just a little curious to hear some more. Needless to say it was a long hot summer awaiting the release of the rest of Monster. So I marked October 9th on the calendar and I wasn’t going to wait a day longer.

After giving this new record not one, not two, but three complete uninterrupted listens I have decided to simply boil this album review down to two very important points.

ONE – Thank God for Paul Stanley and his totally focused vision of KISS 2012. His idea to have the four members, together in the studio, plugged in and bouncing ideas around has spawned 12 new tunes of simple balls out Rock n Roll. And God Damn, it feels good!

Opening up with the aforementioned “Hell or Hallelujah” the album starts at 90 miles an hour and never really eases up on the gas pedal. The sticker on the outside if the CD stated “NO BALLADS” and true to word Gene sets the tone for the rest of the album with “Wall of Sound” a crunchy rocker that gets Gene warmed up for things to come.

The songs come fast and furious as KISS demonstrate some serious musical chops throughout. Kiss have never been shy to wear their influences on their sleeve and you can hear plenty of Zeppelin and some New York Dolls thrown into the mix. Like “Sonic Boom” on a diet of steroids and Red Bull, Monster doesn’t just take things to the next level, it takes things to the next dimension! Every time I listen to it I pick a new favourite track, a sure sign that this album is going to become a mainstay in my ipod.

From the cow bell rocking “Eat Your Heart Out” to the grinding “Back to the Stone Age”. From the AC/DC like riffage on “Take Me Down Below” to the fun and soul full “All For The Love Of Rock n Roll” and the evil “The Devil is Me”. This album has something for everyone. Oh wait, I stand corrected, no it doesn’t, as the sticker stated “NO BALLADS” 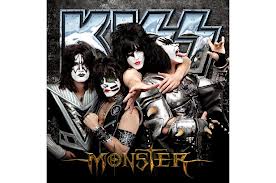 And for the second point of my Monster review…

TWO – Thank God for Tommy Thayer! The guitar leads on this album are so completely off the hook, it’s ridiculous. On Sonic Boom, it seemed to me that Tommy spent a lot of time thinking “what would Ace do here” On Monster, it seems he is completely at home and this time around he is on a fucking mission. Listen to the fretwork, creativity and sheer musicality of these guitar solos, I think even Ace himself would concur, this guy can play guitar.

Monster to me seems to have the good ship KISS all rowing in the same direction. This time around they don’t seem to be trying to be or sound like anything, they are just trying to be Kiss and “God Damn it feels good!”