While I was down in Memphis, Tennessee back in November for Tora Tora’s 25th anniversary concert, I picked up some new discs from some bands unfamiliar to me courtesy of Steve Lockett at FnA Records.

Here is the third CD that I checked out: TRASH COWBOYS – The Good, The Bad & The Nasty 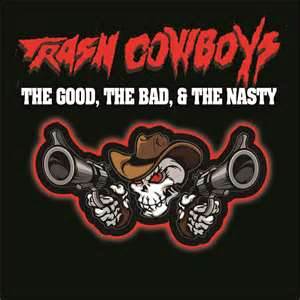 With a cover like the Trash Cowboys CD has I expected something dark and heavy for sure.  Inside the cover was a lovely photo of a naked young lady, right next to which was printed:  “The Sleaziest band in , better known individually as: Macc The Knife/vocals, Brad D. Lee Rude/guitar, Jamii Sinns/bass, Jojo “Dancer” Durant/drums, Nikki Sleaze/vocal on track 10-13.”  This was sure to be just my style of rock, let’s hear it out……
All I can say is……….WTF?? I was shocked to hear the first track, which I can only describe as flaccid with a country flair and a limp chorus, called Fashion Girl.  I don’t like to be negative, but this was not at all what the cover had led me to believe would be in store on this listen and this was, quite frankly, crap!
I persevered into track two, starting off with a western whistle and a catchy, hooky riff, this was much, much better, definitely sleaze.  The Bad Attitude moniker fit the song well.
was nothing special, but still kept the sleazy riffs going throughout.
When it’s Over starts out threatening to be another ballad, but it’s just an intro and then the song opens up into a great sleazy number that reminds me of Cheap Trick’s Surrender for some reason. 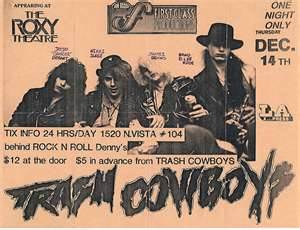 Call Me Crazy, probably the stand out cut on this disc, explodes through the speakers next, starting at full throttle and staying there.  Very sleazy song reminiscent  in my opinion, of Faster Pussycat.

The next two tracks, Get Modern and Sweet Home Trouble, continue the sleazy feel of the listen and help me forget the tragedy of the first track.

The songs When It’s Over and Call Me Crazy appear again for the second time, followed by Lipstick Fixx and Pistol, which are great tracks, but have poor sound quality.  When It’s Over and Call Me Crazy appear yet again to close out the album.
This 2012 FnA release is actually a compilation of three EP’s that the band unleashed.  The first five cuts are from 1991’s The Good, The Bad & The Nasty, with the next four making up 1989’s Sex Saloon, while the last four encompass 1987’s Lipstick Fix.  The sound quality of the last four tracks is horrible, but the music laid down is great.  So while decent songs the Lipstick Fix ones are poor sound quality demos and are really only useful to the true fan as the later recorded versions are much clearer and better.
After reading the liner notes I learned some interesting and perhaps mildly concerning things about the Trash Cowboys. Like for instance during the very first Trash Cowboys performance, Nikki Sleaze pulled out his unit in the middle of their third song!  The power was cut off and they were booted off stage and out of the club.  Apparently, this became a trend with The Trash Cowboys getting kicked out of almost every club they played, often in the middle of their set!  Now that’s trash and sleaze for damn sure!  The bad press in the papers served them well and they became in demand with line-ups forming outside their sold out shows as fans were eager to see what they would do next.  This behaviour and public demand won them the opening slot for Motley Crue on a 6 month world tour.
Visit FnA Records’ website at www.fnarecords.net and they have some short listening samples to find there if you want to hear some Trash Cowboys.  The CD is available for purchase separately or in a fan pack which includes your CD autographed by 3-4 of the original members.  Trash Cowboys also have a website: www.trashcowboys.us