Visiting the Temple……….of Rock that is (Two nights with Michael Schenker in Toronto) 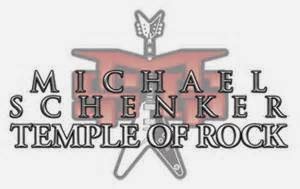 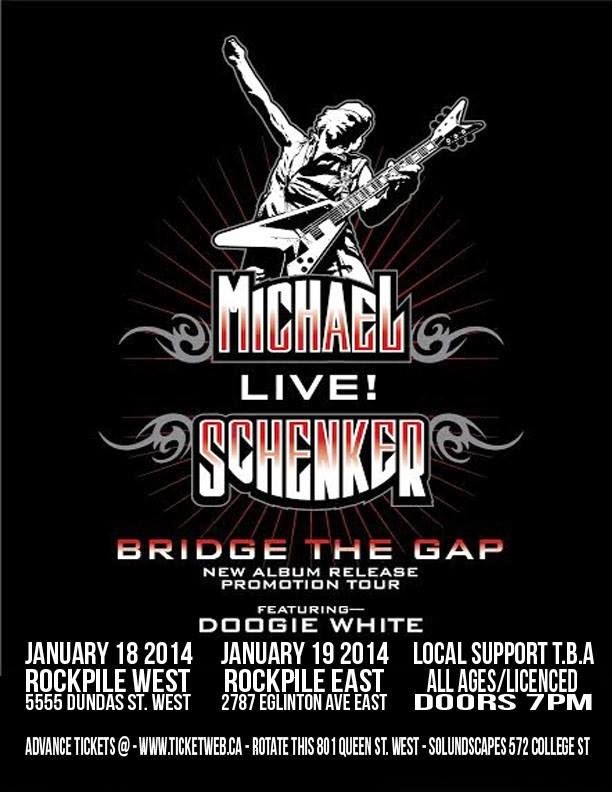 This was a very hard review to write for me.  Normally with two nights of shows and a total of five bands performing each night, I would not mention the stage setters and stick to the two performances of the headliner, in this case guitar great Michael Schenker….that being said however, all the bands that performed each night were all top notch delivering a great show of rock and roll and deserve to be recognised, so I’ll try to keep it brief while I mention everyone.  Each night consisted of two local bands and two bands that Schenker brought on tour with him, so I’ll cover the four local bands first and then into the tour bands that played both nights.

On Saturday January 18, 2014 at The Rockpile West in local band Crisis Kings were the first to take the stage.  They ripped through an entertaining half hour set featuring “Glutton” (which is set to appear on an upcoming compilation called Canuck Metal Volume 2), “Top

Also on the Saturday bill was Top Dead Centre delivering a great set although the guitarist seemed to be having some pedal issues, at one point remarking about the “gremlins in the thing”.  Their set included original compositions such as “On a Train”, (a fan favourite it seemed), “Up To Me” and “Lights Off”.  Top Dead Centre Facebook

Skrou was the first band to appear on the Sunday and I’d seen them a few times previously so I knew we were in for a great performance.  Skrou blew through a set comprised of originals such as “Place to Shake”, “Dirty Little Fantasy”, “Eyecatcher” and “No One’s Home”.  An awesome representation of the local music scene, Skrou are set to release their

début CD at the end of January, check out my esteemed colleague Wallygator’s review of the
CD here: Skrou: Giving Us A Place To Shake.  Skrou on Facebook

Sunday’s show also brought Flux 440 to the Rockpile East in for a solid half hour set including “Slight of Hand”, “Make it Stick” and a cover of Hendrix’s “Foxy Lady”.  They had some fans and followers with them as well as someone hollered out, during one song break,“I love you Frank” to the guitarist who responded with “I see Corey made it”.  Flux 440 Facebook

Next on the roster, playing both nights was Gundriver from .  These young guys served up some excellent high energy rock pushed by guitarist Tom Potter’s stomping riffs, Alex Rivas’ pounding drum beats, Crazy Tomes’ thundering bass and Scott Siegel’s soaring vocals.  Their all original set both nights featured songs from their No. 1 CD “Gundriver”, “Against the Darkness” (showcasing Crazy Tomes intense lead vocal delivery on this Black Sabbath-esque cut), “Under the Rock”, “Rip It” and “Reign”.  Some compositions showcased Crazy Tomes vocal abilities while Siegel took a break and during

all cuts Rivas was hitting his drums hard, tossing and twirling his sticks in the air for an entertaining performance.  During the second night Tom Potter had a slight tuning issue with his guitar that was excellently covered by Crazy Tomes and Alex Rivas doing David Bowie proud as they broke into an impromptu “Space Oddity”.  Be on the lookout for Gundriver!  Gundriver Facebook  Gundriver Website 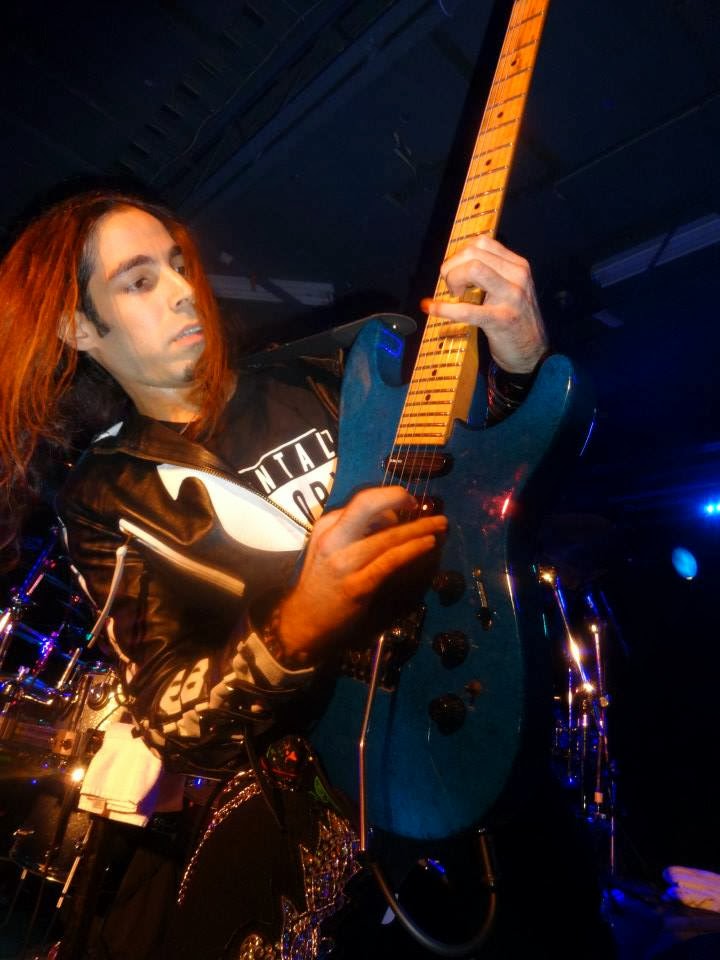 Also travelling with the Schenker crew was Ethan Brosh.  Brosh is a young shredder in the vein of greats of the era such as George Lynch and Joe Satriani.  Fellow Decibel Geek Kate Campbell had previously seen Brosh on his tour with Yngwie Malmsteen (Yngwie Who?) and had become a big fan.  Prior to Brosh taking the stage on the Saturday night I had to vacate my position at the front of the stage in favour of a washroom break.  I wandered into the merchandise area as Ethan Brosh took the stage and discovered that Kate was behind his merch table sporting an Ethan Brosh shirt and selling his CD’s!  Turns out that she had earlier wandered in there and seeing no-one behind his table and customers looking on she jumped in to make the sale and help support the artist!  On the Sunday night Kate became Ethan’s official merch girl 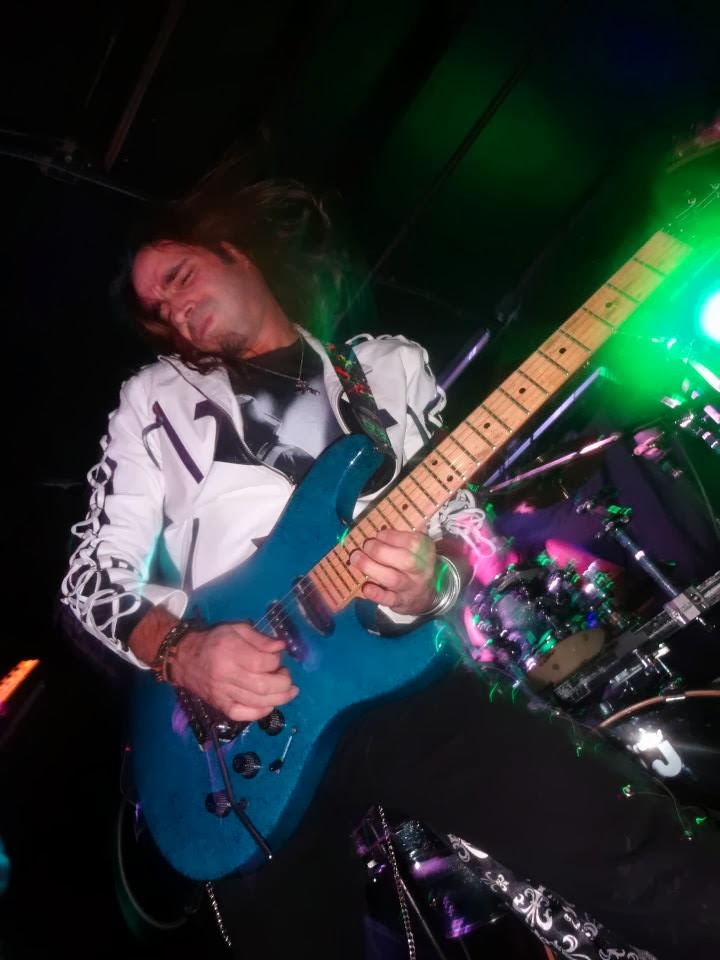 for the evening.  Ethan Brosh’s set was all instrumental and covered selections from his 2009 debut CD Out Of Oblivion including “Downward Spiral” written with George Lynch.  Brosh was absolutely face-melting and there is no doubt of this young shredder’s playing ability, but for me I would have preferred some vocal accompaniment.  Brosh is the guitar player in Angels of Babylon along side David Ellefson (Megadeth) and is also the founder of the band Burning Heat who are in the process of recording their début album and will be playing at The Rockerz Gone Wild Pool Party in Miami a couple of days before I board The Monsters of Rock Cruise.  Expect to hear more from Ethan Brosh.  Ethan Brosh Facebook     Ethan Brosh Facebook
Who better to appreciate an excellent guitar wizard such as Schenker than another talented guitar player….why hello Mr. Greg Fraser of Brighton Rock way over there at the back of the crowd. 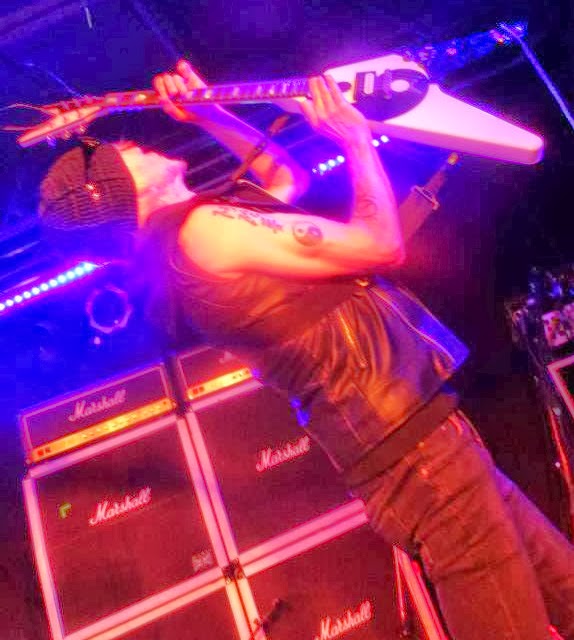 Schenker is probably best known for his time in Scorpions and UFO as well as various incarnations of his namesake band The Michael Schenker Group.  Schenker appeared on Scorpions début recording, Lonesome Crow at the age of 15!  He departed to join UFO and stayed with them for the albums Phenomenon, 1974, Force It 1975, No Heavy Petting 1976, Lights Out 1977 and Obsession1978 also appearing on the live album Strangers in the Night 1979, issued after his departure.  Returning to Scorpions for 1979’s Lovedrive, he soon formed his own band MSG (Michael Schenker Group) releasing The Michael Schenker Group in 1980, MSG in 1981, Assault Attack (featuring Graham Bonnet on vocals) in 1982 and Built to Destroy in 1983.  Two live albums were also issued, One Night at Budokan in 1981 and Rock Will Never Die in 1984.  A re-organising of the band saw Robin McAuley take on vocal responsibilities, the band being re-dubbed McAuley Schenker Group and an output of three albums, Perfect Timing 1987, Save Yourself 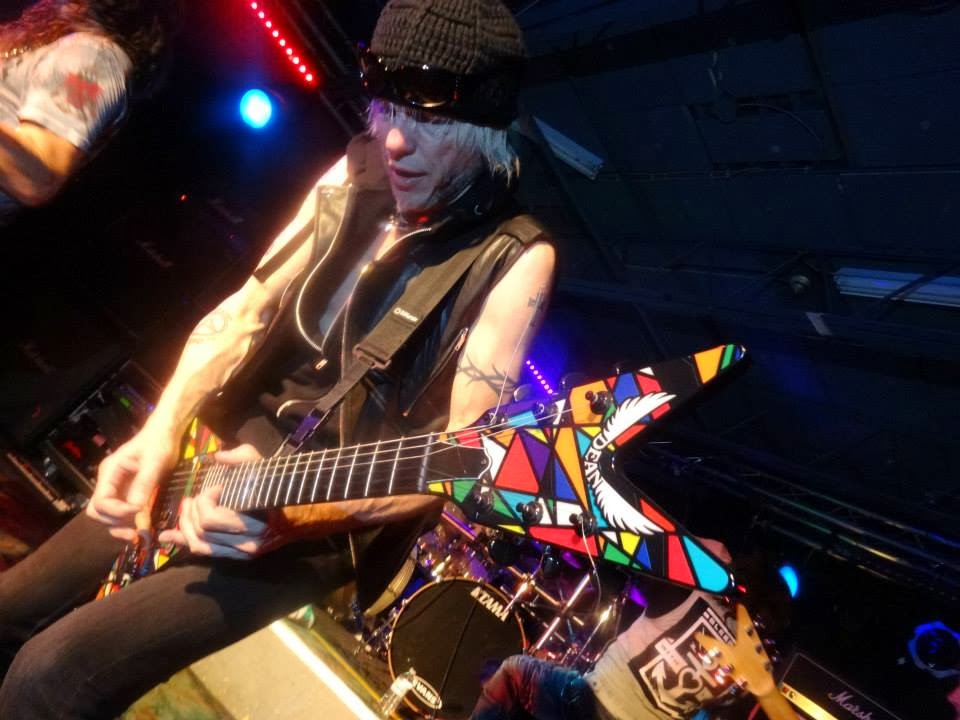 1989 and M.S.G. 1992 as well as the EP Nightmare: The Acoustic M.S.G. and “Unplugged” Live both in 1992.  Returning to UFO on two occasions with another bout of MSG in between Schenker has been steadily releasing albums ever since.  His latest effort titled Bridge the Gap features a band consisting of drummer Herman Rarebell, bassist Francis Buchholz (both former Scorpions members), guitarist/keyboardist Wayne Findlay and Scottish vocalist Doogie White (Rainbow). 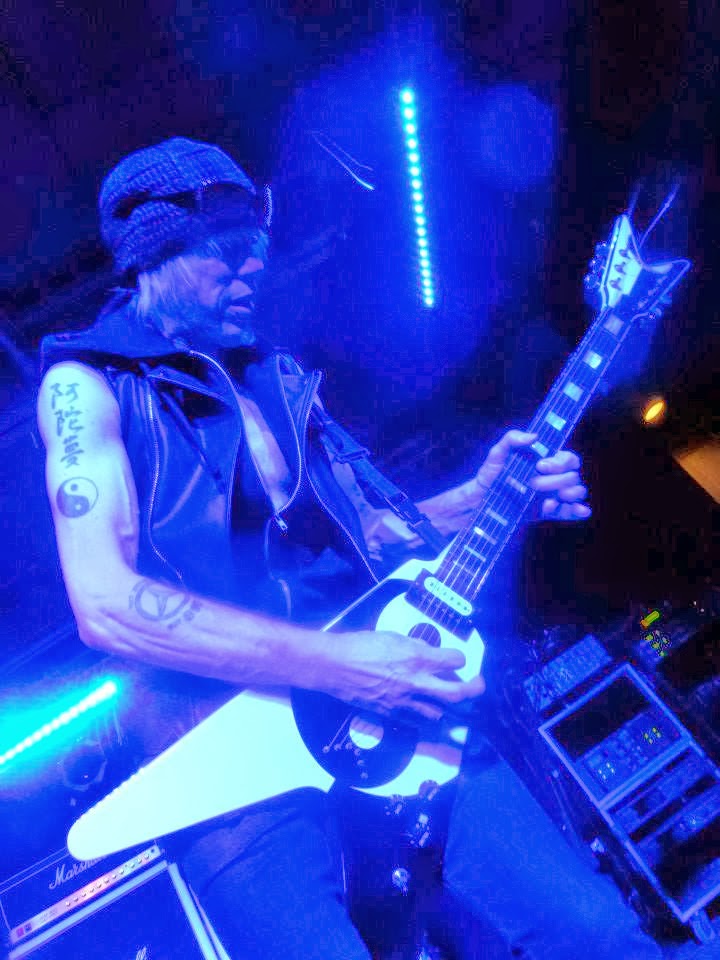 The Bridge the Gap tour made two stops in , one at each Rockpile location on Saturday January 18 and Sunday January 19, 2014.  For the tour Rarebell and Buchholz were unavailable so bassist Rev Jones and drummer Pete Holmes (Black ‘n Blue) were inducted into the .  The audience was treated to such songs as “Neptune Rising”, “Where the Wild Winds Blow” and “Horizons”from that newest Bridge the Gap album and “Before the Devil Knows You’re Dead”, a tribute to Ronnie James Dio, off the previous effort, .  A healthy dose of other classic MSG compositions such as “Let Sleeping Dogs Lie”, “Assault Attack”, “Cry for the Nations”, “Armed & Ready”, “Attack of the Mad Axeman”, “Into the Arena” and “Rock My Nights Away” peppered the set list.  There was also a nod to Scorpions with “Another Piece of
Meat” and “Lovedrive” before a powerhouse UFO finish featuring “Shoot Shoot”, “Lights Out”, “Only You Can Rock Me”, “Let It Roll”, “Too Hot To Handle” and the encores of “Rock Bottom” and “Doctor, Doctor”.  The vocals were excellently handled by Doogie White and the whole band was a tight unit, Rev Jones especially really looking into it, but the feature of the night was certainly Michael Schenker, who appears to be every bit the legend that he’s accused of being.  I was disappointed that I had missed Schenker’s appearance for a few songs with Europe for their 30th anniversary at Sweden Rock Festival 2013, but I’ve now been able to cross Schenker off of my “bucket list” and after these shows I certainly won’t miss the opportunity to see him live again!  Don’t miss the Bridge the Gap tour as it rolls through the until mid February.
MSG Facebook     Michael Schenker Website