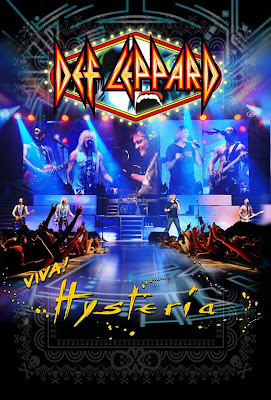 Def Leppard are one of the bands that kicked my ass into the world of hard rock music, in fact they might even take credit as being “THE” band that ignited my passion for music when they released Pyromania back in 1983. I was completely taken with the melody and power of the songs and quickly added their previous albums to my collection. I couldn’t wait for the follow up to Pyromania, but wait is exactly what I would have to do as months would turn to years and for a while I started to question if they would ever release a new album.

My questions were answered on August 3rd, 1987 when Hysteria was unleashed and the rest is rock music history. Hysteria would go 12 times platinum in the states with a staggering 7 hit singles it would dominate the Billboard charts for much of 1988. I was lucky enough to catch two shows on the Hysteria World Tour, both outstanding shows and I am blessed to have seen Steve Clark on top of the world.

Fast forward to 2013 and Def Leppard recently took up residence in Las Vegas for a special run of concerts entitled Viva Hysteria. This was a chance for the band to play Hysteria in it’s entirety, a first for Def Leppard. Now seeing as I would not being able to head off to Vegas, this was a show I was just going to have to hear about or so I thought. As it turns out the shows were recorded in HD for a CD/DVD and theatrical release this fall! Definitely a treat for Def Leppard fans. 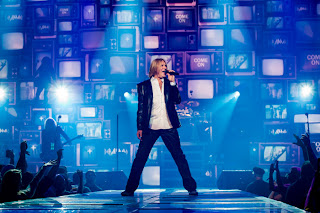 So when I was offered the chance to review the new live CD, you could say I became “Excitable” and jumped at the chance. Easing the headphones on, I pressed play and sat back as the band kicked into “Women” with almost the precision of the studio version I was grinning ear to ear as the distorted bass made me feel as if I was actually there. Known for their sugary sweet background vocals the CD doesn’t disappoint and the riffing guitar duo of Phil Collen and Vivian Campbell gave me goosebumps from the word go.

Most bands that have performed albums in their entirety don’t have the luxury of Def Leppard. Hysteia is a veritable greatest hits album all on it’s own. In fact the first 6 songs were all singles! “Women”, “Rocket”, “Animal”, “Love Bites”, “Pour Some Sugar On Me” and “Armageddon It” all charted, and they were just getting started! Gods of War, my personal favourite from Hysteria gave me chills with the powerful background vocals and stunning guitar work. Complete with all the background sound effects and Reagan’s voice, the production was fantastic.

The intro to Don’t Shoot Shotgun had an urgency and rawness to it that was refreshing, Joe’s voice sounds amazing, more organic with a touch more raspiness, slightly reminiscent of ACDC. Run Riot followed by the title track Hysteria and it’s no wonder this album has sold a zillion copies. The songs show zero sign of wear some 25 years later.

Closing out the show with Excitable and Love and Affection, I realized that Def Leppard are still the masters of melodic arena rock. Maybe it was because Hysteria remains one of my all time favourite albums, but listening to this disc loud and uninterrupted was a magical experience. VIVA! HYSTERIA! indeed. As if Hysteria wasn’t enough, encores of Rock of Ages and Photograph created the perfect rock and roll finale. Or is it?…. 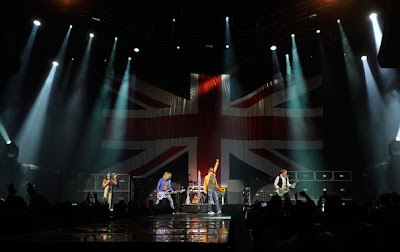 Viva Hysteria is actually a 2-CD/DVD package. For the long time Def Leppard geeks like myself this is where the real gems and surprises occur. To warm up for the actual “Hysteria” show the band each night would come out and be their own “opening act” billed as Ded Flatbird, “the greatest Def Leppard cover band in the whole world”. 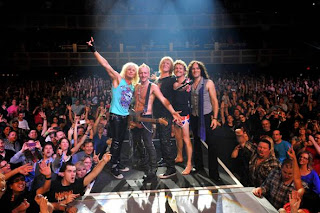 CD2 includes 15 more live Def Leppard tracks where the band seems to have some fun pulling out some ultra rare and vintage songs. Wasted!, Mirror Mirror!, Stagefright!, Rock Brigade! On Through The Night!, Let It Go!, Another Hit and Run! I have to say I was in Def Leppard ecstasy. I never thought I would get to hear these songs live again. Interspersed with Promises (Euphoria album), Slang (Slang album), Undefeated (Mirrorball album) and a brand new song Good Morning Freedom that quite simply cooks!*** A band at this point in their career willing to jump back and pull out some ultra rare gems? I can name quite a few bands that should take notes here. My thanks to Rick Allen, Rick Savage, Joe Elliot, Phil Collen and Vivian Campbell for making these shows happen and more importantly capturing it for all to hear and see.

Viva Hysteria has totally reignited my passion for this band. Can’t wait to see the DVD, in fact I think I will order tickets to the theatrical release. I just hope the people sitting behind me will understand when I stand up and air guitar during the show!

*** After completing the review, it was brought to my attention that the song Good Morning Freedom is not actually a new song but in fact was the b-side of the Hello America single released back in 1980. Thanks go to the astute reader who taught me the err of my ways. Cheers to you my friend!”