Wanted 'Till The Day I Die

Share on facebook
Facebook
Share on twitter
Twitter
Share on linkedin
LinkedIn
Share on whatsapp
WhatsApp
Share on telegram
Telegram
Share on email
Email
Share on print
Print
While I was down in for Tora Tora’s 25th Aniversary, I picked up some new discs from some unfamiliar bands to check out courtesy of Steve Lockett at FnA Records.
Here is the first CD that I checked out: WANTED – ‘TILL THE DAY I DIE
Wanted began back in 1988 in L.A. with vocalist Kenny James and Guitarist Jeffery Lane joining ranks with bassist John E.K.  Living the sex, drugs and rock and roll lifestyle on the  strip, they finally found the missing piece in drummer Stevie Schaaf in the summer of 1989.  Wanted made a name for themselves on the strip with a hard work ethic and energetic, fresh live performances, alas as recording contracts were awarded to bands like Warrant, Poison and L.A. Guns, Wanted fell victim, like so many other bands, to the grunge explosion of the early 90’s. (Adapted from the inner sleeve of the liner notes) 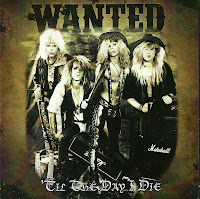 I was completely unfamiliar with Wanted and had never even been aware of their existence previous to this listen.  I was drawn to this as my first listening choice from my newly acquired selection by the wild west cover.  I’ve always loved the wild western genre.  Looking at the liner notes and the photos included, they certainly look glammy with the teased hair and make-up.  Let’s give it a spin then shall we………
I was pleasantly surprised by the opening bass line and riff to the lead-off track, Baby Tonight.  Certainly not the most original lyrics (you’re the one I want, you’re the one I need, give it all to me baby, tonight), but a great, heavy LA Strip sleazy glam sound.
Avenue of Sleeze moves along in the same fashion and had Ole Meister groovin’ along with it as it was reporting about the all the sex, drugs and debauchery to be found on the  strip as it says on the inner sleeve.
In the third slot is 2ND Best, a ballad.  I’ve never been a ballad guy, although a few have caught my attention over the years, most recently being Canadian band Gypsy Rose’s Don’t Turn Your Back On Me Now (also an FnA Records release coincidently)
The tempo picks up again with Friend or Foe asking why can’t we be friends and then continues into It’s Hot, a generic rocker. 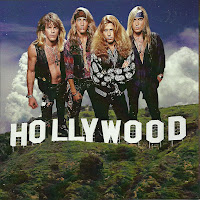 Then we slow it down again with All The People and then even slower with My Love, both of which don’t really hold my attention and basically fade into the background.
Rocking Horse Lady attempts to make itself known, bringing me back from my nap.  My attention really perked up again with the crunchy riffs of Say Goodbye.  Say Goodbye, is according to the inner sleeve, inspired by the suicide of one of Kenny and Jeff’s closest friends.  Serious subject matter for a glam album for sure.
Set Me Free holds the attention and I crank up the volume a bit more as the crunchy riff attacks.
And after the riff attack of the last two tracks, here comes the ballad assault once again with Me And Only Me
Title track is the album closer and it’s power chords make a nice finale at over seven minutes long.
The up and down pace of all the ballads in the middle of this sandwich really takes a way from the overall experience of what are some great songs hiding in this in this ballad laden wilderness of a CD.
At about 53 minutes runtime this CD is, overall, not a bad listen and certainly it grows on you with each spin.  Stand-out tracks include Baby Tonight, Say Goodbye, Avenue of Sleeze, Set Me Free and ‘Till The Day I Die.
Visit FnA Records website at www.fnarecords.net and they have some short listening samples to find there if you want to hear some Wanted.  You won’t find this anywhere else.  The CD is available for purchase separately and in a fan pack that includes having your copy autographed by Kenny James and Stevie Schaaf