When the Long Stick Goes Boom……..

Switzerland may be known across the globe for their army knives, banks and chocolate, but to me it’s their contribution to the metal world with Krokus that stands out.  The band that achieved success in the 80’s in North America based on a string of albums such as Headhunter, Hardware, One Vice At a Time and The Blitz is back now in 2014.  Actually there has almost always been a new Krokus record in the marketplace despite the rotating line up, at times with only one original member present as the revolving door scenario plagued the group.  In 2008 the “classic” lineup reunited including distinctive voice of Marc Storace, guitarist Mark Kohler, skin basher Freddy Steady and “the long noses” guitarist Fernando Von Arb and  bassist Chris Von Rohr.  Steady departed after 2010’s Hoodoo album and was replaced by Flavio Mezzodi, but not until after 2013’s Dirty Dynamite.  In between those drumming events saw Canadian born guitarist Mandy Meyer who had been involved with Krokus as far back as the 1982 tour for the Hardware album rejoin the fold creating a triple threat axe attack! 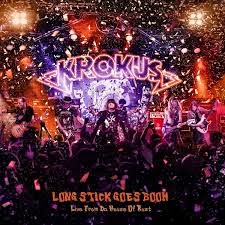 Long Stick Goes Boom: Live From da House of Rust captures the live Krokus experience quite well and is the first live release since the excellent Fire & Gasoline in 2004 which saw a near completely different roster performing.  Long Stick Goes Boom: Live From da House of Rust was recorded in Solothurn, Switzerland in a small club called The House of Rust on August 30th, 2013 and for those who haven’t seen the band live this is the next best thing.  I know, I had to travel to Sweden (one of my deciding factors in trekking to my first Sweden Rock Festival in 2013) to finally capture some live “Krok n’ Roll” (Read about that show here).  I’ll be getting another chance for the live Krokus experience aboard 2015’s Monsters of Rock Cruise as they’ve been named to the ship’s registry.  While you’re (finally) over this side of the pond boys, I know a great club in Toronto that would love to have you!

The album wastes no time getting going as it fades in to the cheering of the crowd and the opening track “Long Stick Goes Boom”, a personal Krokus favorite.  Rapidly apparent is that Storace’s vocal chords and prowess haven’t lost a step and after the second chorus of the song they break into a snippet of The Who’s “Pinball Wizard”.  “Are you ready for some crazy “Krok n’ Roll”?”  Storace calls out as they rip into “Hallelujah Rock n’ Roll”, “Go Baby Go” close on its heels.  From there it’s into a song covered by many bands, but none so well as this that I actually prefer to the original, The Guess

Who’s “American Woman”.  We travel from America’s women to the evenings of Tokyo next with “Tokyo Nights” and then into “Fire” both originally found on the Metal Rendez-vous album, “Fire” showcasing Meyer’s talents.  A medley appears next including 1981’s “Rock City”, surprisingly melded in with two current songs, “Better Than Sex” and “Dog Song” before the awesome power ballad “Screaming in the Night”.  “Screaming in the Night” is another choice cut of mine and sounds great here live, for some reason I can just imagine driving down a dark deserted road when I hear the beginning of this one.  I was shocked to hear “Hellraiser” from my personal favorite Krokus album of the same name, as only Storace and Meyer were present on that 2006 issue that takes a more heavy metal direction.  Three classic Krokus favorites are next in line with “Bedside Radio”, “Easy Rocker” and “Heatstrokes” but they stumped me with “Live For the Action”, a Krokus song that I was unfamiliar with!  Turns out it was recorded as the anthem for the 2009 Hockey World Championships that were hosted by Switzerland.  “Hoodoo Woman” closes things down as Storace gets the crowd singing along with him and this new Krokus classic.

A great Krokus album capturing the live spirit of the band, but I was a little disappointed not to hear “Our Love”, my all time top Krokus track.  Actually there were several surprising omissions to the setlist like “Headhunter”, “Ballroom Blitz”, “Rock n’ Roll Tonight” and “Eat the Rich”, but I guess with so many in the catalog choices have to be made!  Having seen Krokus in concert at Sweden Rock Festival in 2013, this album takes me back to that day except that now I can just feel the dankness of a sweaty club through the recording.  I dearly wish I had been there in Solothurn Switzerland on August 30, 2013 and MORC 2015 can’t get here soon enough for me.  Long live Krokus!