Wild Wagener Week – Back In the Streets 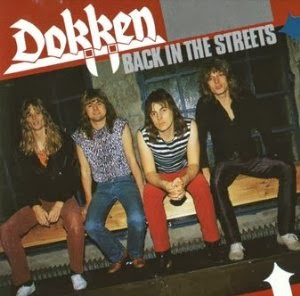 Wild Wagener’s Week: “Dokken – Back In The Streets”.

Ok, that said, Dokken was one of the premier rock bands to come out of the L.A. Sunset Strip scene with such alum as Motley Crue, W.A.S.P., Ratt, and Quiet Riot.  Dokken started out in the early 80’s as a band called Airborne, with Don Dokken on lead vocals and guitars, Tom Croucier on bass, and Bobby Blotzer on drums.  Tom would later leave and be replaced by his brother Juan, (who would later end up in Ratt with Blotzer). When Don asked George Lynch and Mick Brown, who were playing together in The Boyz and Exciter, they initially turned him down.

They later joined up, and under the new name Dokken, released Breaking The Chains.  In reading Blotzers book a few years ago, he did tell the story of him being in Germany touring with Vic Vergat, when Don approached him to play on some demo’s, which later turned into Breaking The Chains.  It is unclear if he is actually on the released album, or if it is all Mick Brown.  I did attend an after party a few years ago, where Bobby was promoting his book, and he refused to sign a copy of the Dokken album when someone handed it to him.  I didn’t clearly hear his reason but I did hear something of the lines of “I’m not on it, so I can’t sign it”.  With the release of Breaking The Chains, Juan left to stay with Ratt and in comes Jeff Pilson.  Now as a 13 year old kid, who saw the Breaking The Chains video and didn’t understand why the guy in the video wasn’t the guy pictured on the album, it later did get reported in Circus magazine that the new bassist was Jeff Pilson.

In 84′ Dokken released Tooth and Nail which shot up the charts and got tremendous rotation on MTV with the videos for Into The Fire, You Just Got Lucky, and then with the power ballad Alone Again.  I bought the album and quickly fell in love with both Don’s voice and George’s guitar playing.  He quickly became my all time favorite guitar player, behind Randy Rhoads, who had already passed on.  To me, Dokken was the top of the heap, with follow up albums, Under Lock and Key, and then Back For The Attack.  I don’t understand why they weren’t headlining arenas instead of Ratt, who started headlining with their 2nd release Invasion Of Your Privacy.  Although Ratt was a great band musician wise, Stephen Pearcy was horrible live, and Don Dokken was great live all the times I saw them, which was a lot.  There were always rumors of infighting between Don and George and as fast as they rose, they imploded and broke up in 89′ after the release of their live album Beast From The East.  I got to personally know Don between 89 and 90 when I was stationed in AZ when I was in the Air Force, and he did tell me some stories about why he and George fought constantly. That story will be told at a later time, as I only know one side and I’m sure George will say different, and I did ask George when I met him a few years ago, and his comment, “No Comment”.

In 1990, Don released his first solo album Up From The Ashes, which I was given a cassette demo copy of before the release as I was being deployed over to Irag for the first Gulf War in August of 1990. Thank you Don, that album got me through a lot of dark times in the desert.

Jump forward to 1993. I was living in Odessa, TX and I went into a CD Warehouse. I had never heard of these CD stores before, and finding a place that sold used CD’s for under $10 was a dream come true to me.  As I was trolling thru the rock section, I came across the D section and there I found a new Dokken album called Back In The Streets.  I thought I hit the jackpot as I followed this band wholeheartedly, even without the internet, and thought I had everything they had released.  But, as I pulled the CD out and looked at the picture on the cover, I knew this was not the Dokken we all knew and loved here in the USA.  I opened it and saw the track listing and on all the songs it did say Dokken, Lynch, Pilson in some form or another so I bought it thinking that maybe the cover was wrong or something.  The minute I got home and put it in, I knew immediately that this was NOT George Lynch playing guitar.  The only song on this album that went on in another form was Track 2. Felony.  It was reworked for Breaking The Chains. As for the other tracks, I have read comments online that the track Prisoner, which is live here, was reworked for Back For The Attack, but this is untrue as the song Prisoner on Back For The Attack was totally written by the band and this demo was not used for it at all.  The tracks on this album, even in demo form, are much harder than the music that came in 79′ when this was recorded.  It sounded like 80’s music but was from the 70’s.  Don Dokken always knew where he wanted to go musically and what he wanted his band to sound like.  He was a visionary.

This was one of the first albums that Michael Wagener produced, and as he stated in the podcast interview, it was Don Dokken who talked him into coming to the states where he became the great producer that he is known for being.  I do know now, thanks to the internet, that this was released without Don’s permission therefore Don considers it strictly a bootleg that hardcore fans would want to acquire.  I feel lucky enough to have gotten this CD for $6 as now its going on Amazon from $30 up to $400 depending on where you get it.  The songs are good, but I would only suggest you buy this if you are just a collector or really just want to have anything that Dokken, or Don rather, put out or recorded.