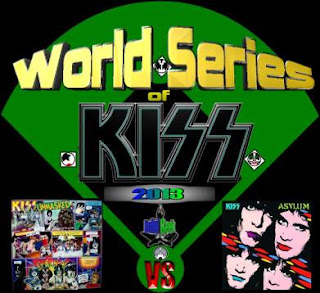 Round 1 Game 2 – Unmasked VS Asylum
Just in case you missed it, the Decibel Geek is playing the WORLD SERIES OF KISS to crown the definitive KISS Album Champion for 2013…

BJ: Wow, Unmasked and Asylum, two albums often dismissed by Kiss fans as inferior for a variety of reasons but I have always liked both albums quite a bit. I have to cop to a small amount of hypocrisy here perhaps, seeing as how I called Kiss “soulless” for aping the grunge sound to fit in but I don’t have a problem with them aping the power pop/pop rock sound of 1980 on Unmasked. I’m not sure why Unmasked sounds so lightweight, obviously Vini Poncia played a pivotal role in the shift, but there are a lot of very well-written songs on Unmasked and while bad production certainly can ruin a good song the quality of most of the songs on Unmasked surpasses whatever qualms one might have with the album’s wimposity, although I don’t really have a problem with the way the record sounds. Paul shines on the album, “Tomorrow” is probably one of my top ten favorite Kiss songs and “What Makes The World Go Round” and “Easy As It Seems” are excellent. Ace graces us with three original tracks, unfortunately “Torpedo Girl” is embarrassingly bad, almost as bad as Gene’s “She’s So European,” but Ace makes up for it with “Two Sides of the Coin” and Gene makes up for it with “Naked City,” both are great songs. As for Asylum, again I’m a hypocrite: I fault Kiss for grunging it up on Carnival of Souls but I give them a pass for glamming it up for Asylum, but here’s the thing, it’s not about how they dressed, it’s about the songs, and the songs on Asylum are very strong. My favorite is probably Gene’s “Anyway You Slice It” but I quite like Paul’s “King of the Mountain” and “I’m Alive” and the singles “Tears Are Falling” and “Who Wants To Be Lonely” are excellent. It wasn’t easy for me to simply choose which album I liked more so I decided to assign each song a number between 1 and 10, 1 being shit and 10 being amazing. Here’s how that came out:
Unmasked
Is That You 7
Shandi 7
Talk To Me 8
Naked City 8
What Makes The World Go Round 8
Tomorrow 10
Two Sides of the Coin 9
She’s So European 3
Easy As It Seems 8
Torpedo Girl 2
You’re All That I Want 5
Total=75
75/11=6.81
Asylum
King of the Mountain 8
Anyway You Slice It 9
Who Wants To Be Lonely 8
Trial By Fire 5
I’m Alive 7
Love’s A Deadly Weapon 2
Tears Are Falling 9
Secretly Cruel 3
Radar For Love 2
Uh! All Night 6
Total=59
59/10=5.9
So Unmasked wins, I like Unmasked more than Asylum.

AAron:  Unmasked Vs. Asylum is a pretty good match-up, because even though I view them as being from two different KISS eras, they are both very similar. Both are examples of KISS experimenting with a sound trendier to their times. In 1980 I think KISS saw poppier rock bands like Queen and Blondie scoring big hit singles, the same way five years later they recognize the emerging popularity of bands like Quiet Riot and Ratt. If you’re comparing Unmasked and Asylum to their contemporaries they are really good albums for their times, but compared to the rest of the KISS library I feel these are both lower rung albums. I can’t completely down ’em because they both feature stellar guitar work from Frehley and Kulick respectively, same for the drumming of Eric Carr and Anton Fig. Both albums are filled with solid rock tunes. The Unmasked cover was cool, Asylum was the worst KISS cover ever. I’ll give my pick to win in this match-up to Unmasked, because of it’s diversity of songs. I like that Gene, Paul and Ace still had their individual styles well represented, while Asylum was more Stanley & Simmons (w/ Carr and Kulick). Winner: Unmasked

Chris: Unmasked is a love/hate album for me. I go through phases where this album is just what the doctor ordered and I really get into it. Then, I’ll revisit it a few months later and cringe in agony at the poppy, lightweight approach that the band took in making it. On good days, tracks like You’re All That I Want, What Makes the World Go Round, and Naked City offer a schooled, almost r&b influenced sound that produced some of KISS’ most sophisticated pop craftsmanship. On other days, the keyboard-busy sounds of She’s So European along with the juvenile lyrics of Two Sides of the Coin and Torpedo Girl combine to give me a massive sugar-coated migraine.

Asylum is a very uneven record as well. When put up against other albums being released at the time, I think it fits in fairly well; and that’s a problem. Aside from some well-written highlights that include Tears are Falling, Who Wants to Be Lonely, and King of the Mountain, it’s totally pulled down by mediocre filler tracks like Radar for Love, I’m Alive, and Love’s a Deadly Weapon. There’s also a song titled “Ugh All Night.” KISS is known for goofy sex-laden songs but this is ridiculous. Winner: Unmasked
Rich: This was another very easy choice for me.  When I was 14 and getting into KISS, I used to go to the local record store and flip through the KISS records studying the artwork and track listings, deciding which one to purchase every few weeks with my meagre cash flow.  For the most part I had not heard many of the songs unless they had appeared on Smashes, Thrashes & Hits (My first KISS purchase), so the albums that had no songs appear on that compilation intrigued me.  I remember often looking at Unmaskedwith it’s comic book artwork cover and dreaming of one day completing my collection until the day I purchased it, probably my fifth KISS album purchase.  Perhaps that is why I love this album so as it was early in my listening rotation/collection.  I loved Is That You? and Torpedo Girl was fun, but it was Talk To Me that made the record for me.  Again, in my basement with the air guitar, imagining being up on stage and singing this song to the girl that I had a crush on.  Asylumwas largely too glammy for me (even at the time I didn’t like the costumes I’d seen Paul wearing in videos).  There are some classic KISS cuts on Asylum to me with Uh! All Night, Tears Are Falling and Who Wants To Be Lonely.  I again re-listened to each album cover to cover and had forgotten some of the other high points of Asylum, but over all, the first is still the best.
If we look at it in terms of a 10 goal hockey game (I am Canadian after all…lol) The Meister predicts the scoring outcome would be Unmasked 7 – Asylum 3. Winner: Unmasked
Wally: Ok well sometimes you have to pick with your heart and not your brain. This choice is one of those and I would imagine I am swimming upstream all alone on this battle. Unmasked was Kiss at their most commercial and poppy. The songs were really good and I find there is a lot of diversity found within. Ace rocks this album with “Talk to Me” being one of my all time favorites. I
thoroughly enjoy Unmasked and my brain tells me that Unmasked is the better album.
My heart tells me otherwise and I will explain why. Asylum came out when I was 16 years old. I saw Kiss or the first time on the Animalize tour the previous year and we (my friends and I) were Kiss NUTS at this point. I remember buying the vinyl with my good friend Howard and sitting in my living room spinning it the very first time. When those drums intro’d “King of the Mountain” we were grabbed by the throat and knocked senseless. “Any Way You Slice It”, “Trial By Fire”! this album is so underrated and I often spin this on the ipod.
I get there is some filler on there and the outfits and album cover were dated and a little silly but “Who Wants To Be Lonely” might just well be my all time favorite Paul Stanley track of all time. So I vote Asylum because it reminds me of great times and great memories. Winner: Asylum