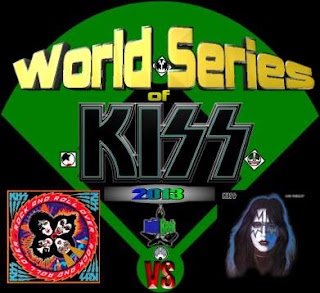 Ok after a very long hiatus, we return to conclude the World Series of KISS!, up first is the semi final match up of Rock N Roll Over VS. Ace Frehley ’78!!

Rich:  Well, I’ve been against Rock n Roll Over since the start of this, so I’ll stick to my guns and go with Ace’s fine solo effort for this match-up. I know that the solos are not usually high on anyone’s list of favorite KISS albums, but I, myself, do have an unhealthy appreciation for them and since my actual favorite albums have suffered messy defeats in some cases, I’m going for Ace to victory! Winner: Ace Frehley

BJ:  Rock and Roll Over opens with a killer pair of Paul Stanley tunes, I Want You and Take Me, but Ace Frehley’s album opens with an even better pair, Rip It Out and Speedin’ Back To My Baby. I adore all four songs but I’d rank them this way:

Ace takes an early lead! But wait. Let’s be rational. The time has come for a fair assessment. There are really only 8 songs on Ace’s album, and one of those is a cover, a damn good cover but still a cover. Rock and Roll Over is a solid ten song album. Baby Driver is a pimple on the album’s ass (in my opinion) but there are still nine very good songs. Mr. Speed, lyrics be damned, is one of my favorite KISS songs. I’m not sure what Paul is bragging about but his confidence is convincing. Whatever it is that he is swift about, he is exceedingly swift, and I guess the ladies really enjoy how, uh, punctual he is? Gene’s contributions to the album are surprisingly strong, I quite like all four, and luckily Beth II: Acoustic Boogaloo was written by Paul, i.e. Hard Luck Woman is great. I could be defiantly sentimental and vote for the Ace Frehley album the way some people voted for Paul’s solo album over my personal favorite KISS album, Dressed To Kill, and Ace’s album has always been one of my go-to records, ever since the cassette took up residence in my walkman, but taking all factors into account…Rock and Roll Over is a better KISS album, I think. Hmm…yeah…Rock and Roll Over is better. Wait…yeah…but…shit! I vote Rock and Roll Over NO TAKE BACKS I take it back YOU CAN’T TAKE IT BACK crap! Rock and Roll Over. Winner: Rock And Roll Over

AAron:  As I stated on the most recent Decibel Geek episode, I feel bad that Ace ’78 beat the KISS debut in the last round. My honest thinking was that Ace deserved at least one vote, and I believed that mine would be the only one. 4 to 1 easily, right? This is the World Series of KISS after all, and not Ace Frehley. I can’t, with a clear conscience, do that again here. I guess that I just didn’t want to vote Ace off the island, he’s too cool! Ace ’78 is such a fantastic album, but this is where the lightning ends. I vote RNRO, before I change my mind… again!

Chris:This is a grudge match between, possibly, my 2 favorite albums in the catalog. The fact that Ace’s 1978 solo album has made it to this point just exemplifies what an awesome achievement it is. Since I was only 2 years old when the album came out, I don’t have any memories of its release but I think it’s pretty well known, across the board, that this album came from out of nowhere and really took people by surprise. In my opinion, there isn’t a bad song on the album (although ‘Wiped Out’ comes close). The marriage of edgy, power pop and Ace’s pentatonic-from-heaven solos make this a knockout record. Rock & Roll Over is, to me, the original band at its absolute peak. The songs on the album, as stated previously, show a more seasoned KISS that had learned to hone their influences as well as stretch their limits. Combine that with Eddie Kramer’s bare-bones approach that gives you KISS in-the-raw and you’ve got the ultimate KISS album. Not to mention, a timeless album cover. Very difficult decision but I’ve got to go with the full-band effort. Winner: Rock and Roll Over

Wally: Hmmm? Rip It Out is quite possibly the strongest opening track on any Kiss record and that says a lot! I am serious get some quality headphones, sit back, close your eyes and let Rip It Out rock you to the core. Ace’s solo album has come this far for a reason, it cooks from the start.

Rock And Roll Over, however is KISS riding the crest of the wave. Alive broke the band, Destroyer cemented their rock star royalty and Rock N Roll Over was the album where they could actually breath and enjoy the ride and it shows. The songs are lean, gritty, and really take you on a rock n roll ride. I have to say this is Gene and Paul songwriting at it’s best. Usually there is a filler track or two (mostly courtesy of Gene) but not here. Take Me and Makin’ Love are some of Paul’s best ever and Gene delivers Dr. Love and Ladies Room with conviction. I love Peter singing Baby Driver the only thing missing is Ace on vocals, how ironic as it battles his solo album. A close battle but I will have to give it to Rock N Roll Over. Winner: Rock And Roll Over

With the score 4 -1, Rock And Roll Over advances to the final!